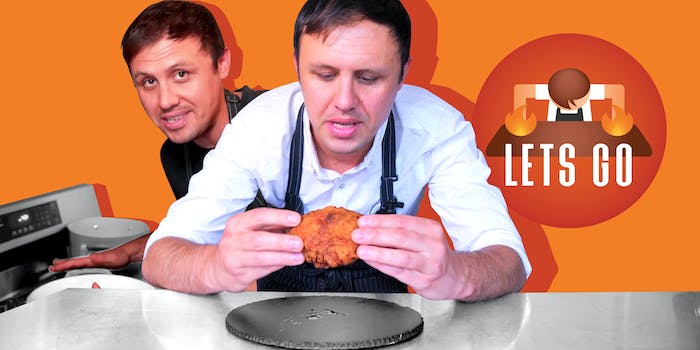 For ThatDudeCanCook’s Sonny Hurrell, absurd humor is the secret ingredient to his popular YouTube videos

'I have no idea how I came up with the sentient pepper grinder.'

There are unknown mysteries like “who built the pyramids” or “are we alone in the universe?” Age-old questions keep humanity looking into the cosmos, daring us to think bigger than ourselves, but one thing that anyone who’s been watching Sonny Hurrell, aka That Dude Can Cook, wants to know is—what did that fridge ever do to you?

Hurrell has become one of the rising stars in the food creator community. His videos across platforms like TikTok, YouTube, and Instagram have netted him followers in the millions, despite creating content in a crowded playing field of talented chefs. Making a proper grilled chicken thigh sandwich is one thing but driving the personality to keep people clicking the subscribe button is a different beast. Hurrell does both; with his warm, charming demeanor, he’s found an audience that likes that he can teach them how to make a particular dish but also does something different than his peers—he’s entertaining as hell.

Working from his home kitchen in Aspen, Colorado, Hurrell has a unique worldview that gives him a dash of the atypical—he was born in England, lived in Perth, Australia, and then bounced around Colorado and California. He did a stint in the Netherlands as a young cook, and even spent some time with his brother at the famed Fergus Henderson’s restaurants, St. John’s and Bread and Wine in London. To step into the kitchen of one of Henderson’s kitchens is no small feat—he’s one of the most well respected chefs in the last three decades.

Speaking with Hurrell over the phone, it was easy to see why people gravitate toward him. He’s the same guy you watch in his videos. It’s not an act. Despite the success of his social media platform, he’s remained humble throughout the experience.

“I started a YouTube channel pre-pandemic, but nothing happened. I had maybe two thousand subscribers, at best,” he told Passionfruit. “During the pandemic, I got back on there and started cooking, making posts on TikTok and the next thing, I had a video (a recipe for rosemary salt) that had over 100,000 views. That made me really dig into this social media thing. I think during the pandemic people were picking up old hobbies and cooking was one of them. It was a perfect storm.”

Because of the pandemic and the total loss of work, many people who are creating food content know what it’s like to see their world fall from beneath their feet, they were working cooks who suddenly were out of a job. “I worked in fine dining, in all kinds of kitchens, but then moved into private catering and cooking for the rich folks in Aspen,” Hurrell said. “Once COVID hit, I lost all my cooking gigs. I was home doing nothing. I got so lucky with the TikTok thing.”

And “the TikTok thing” has evolved. Hurrell’s cooking videos teach people how to make his signature rosemary salt, spatchcocking chickens, and the deadly art of making the perfect deviled eggs. But, while he’s offering a look into how to be a better cook, it’s the humor he’s laced throughout the series that makes him unique. Hurrell uses absurd props to let his personality shine through the mundane. By creating a world that’s not just a recipe explained, Hurrell is giving his viewers a look inside his head, which he describes as equal parts Julia Child and Jim Henson. There’s Sergeant Gilbert, his pepper grinder, complete with a Fu Manchu and googly eyes. And then there’s Master Sergeant Gilbert, who’s as big as a Louisville Slugger—to grind pepper.

“I have no idea how I came up with the sentient pepper grinder,” he said. “But it’s funny. People were talking about it. I have the Master Sargent, and that thing is like a fucking rocket launcher. I want to get an even bigger one made.”

That’s one of the notes that lands with the channel; it’s unpretentious. He’s not trying to be Marco Pierre White or Gordon Ramsey. He can cook but does it with a laid back persona that lets the food speak for itself, without having to play the part of the asshole chef of lore. He’s cool with stealing a page from the book of Monty Python, using a pepper grinder that is meant to look like a sensei straight from a Shaw Brothers kung fu flick. But, if there’s ever a star that might be bigger than his own, Hurrell is aware it’s all about the fridge.

In one video, he hit the fridge in celebration of a recipe coming together, and now the poor vessel is covered in punch and kick marks. Hurrell has even said he wants to “blow it up with a stick of dynamite or something.” What’s even funnier is that Hurrell is an active martial arts practitioner. He works on his punches and kicks, some of which he gets a running start, and lands them directly onto the face of his Frigidaire. He’s got two fridges, one that his landlord owns, that came with the house, and one dedicated to violence. I’d mentioned he needs a Frigidaire corporate sponsorship considering the beating it’s taken.

Hurrell says his plans are to incorporate more comedy into his videos, to see how far he can take where food makes people laugh, but still offers an educational point of view: “I want to see what we can create, what we can do to make these characters do more. Can we take it to the next level when I move to Austin? I hope so. Right now, it’s just me.”

That’s Hurrell in a nutshell. He’s not pretentious but always looking toward something more significant than just how to reverse sear a steak. He’s got plans, “We’re moving to Austin in the summer. I’d love to start doing pop-ups. Maybe a restaurant, but those are so risky. I like working with a non-for-profit and doing something meaningful with food, but that helps people. Cooking makes me happy. Making people laugh makes me happy. I’m at this intersection that I’ve always dreamt of, and it’s exciting.”

That kind of honest enthusiasm isn’t surprising given that Hurrell’s inspiration doesn’t come from the places you think it does, “My heroes are yogis – Ram Das, people like that. Not super famous people. It’s about mindset. Whatever inspires you, whatever gets you fired up. I feel grateful that I’ve been allowed to share this time on earth with some of these minds that have taught us so much about ourselves.”

He continued, “It’s simple, the point of a cooking show—is that someone can watch the cooking show and figure it out. There are so many channels about steak quality, and there’s never a recipe. I want to give people something they can apply to their lives. I wanted them to be informed and entertained. I’m selective about what recipes I’m making. I want anyone who watches me to feel like they’ve gained knowledge above all else.”

With a mindset like that, it’s easy to see why That Dude Can Cook’s numbers tick upward daily—even if the fridge is sacrificed for entertainment’s sake.

Robert Dean is a journalist, raconteur, and enlightened dumbass. His work has been featured in places like MIC, Eater, Fatherly, Yahoo, Austin American-Statesman, Consequence of Sound, Ozy, USA Today, to name a few. He’s appeared on CNN and NPR. He also serves as features writer for Hussy Magazine, and is editor in chief for Big Laugh Comedy, Texas’ biggest comedy production company. He lives in Austin and loves ice cream and koalas.