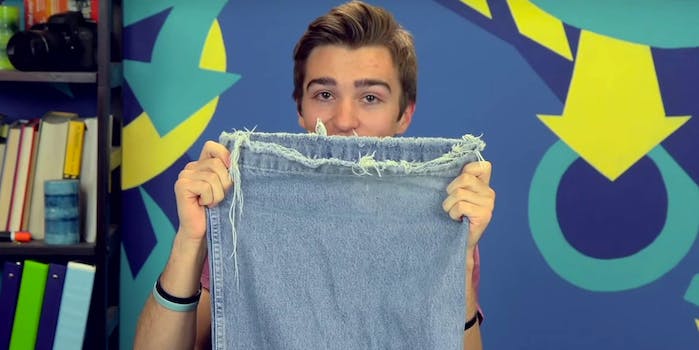 'I mean, look, you could fit an iPad in there.'

Did you have a moment of panic a couple months ago when you heard JNCOs were coming back? Yes, just enough time has passed that the wide-legged jeans are back in vogue again, and now a whole new generation is discovering their dark magic.

If you actually wore JNCOs in the late ’90s (maybe you and your high school boyfriend had matching jeans? Nothing to be ashamed of), this Fine Bros. video will likely throw you into an existential abyss, because these teens haven’t heard of them. But those giant back pockets you used to put your wallet chain in? “They should have had these now,” says one teen. “I mean, look, you could fit an iPad in there.”

“These look like pants you would garden in if you were 50,” says another disgusted teen.

“I can’t see anyone rocking these,” a male teen observes. You clearly haven’t seen the photo of me at a Korn concert in 1998.Screengrab via TheFineBros/YouTube