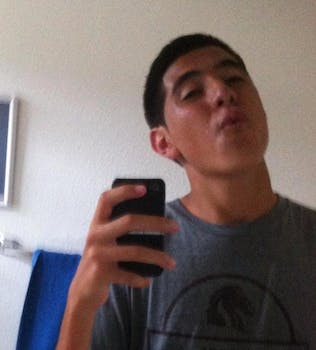 Teen dies after copying “choke out game” from YouTube video

A 15-year-old passed out on top of a glass, sustaining fatal cuts, after copying self-asphyxiation instructions from a YouTube video.

A teenager in California has died after performing a dangerous self-choking stunt that he first saw happen on YouTube.

15-year-old David Nuno bled to death at his parents’ house in Chula Vista, Calif., after suffocating himself enough that he passed out, fainted onto a drinking glass, and cut his carotid artery.

Authorities say that Nuno and two friends had been in Nuno’s room watching a video that detailed ways to “intentionally pass out through hyperventilation” Tuesday night before the tragedy occurred.

“The victim apparently did what was in the video, fell forward, and landed on a drinking glass on the floor,” Chula Vista police captain Gary Wedge told Chula Vista’s ABC news affiliate. The glass apparently shattered and punctured Nuno’s neck along his carotid artery.

Wedge also said that Nuno’s friends tried to revive him, flipping him over onto his back before he came to, stood up, and ran downstairs in a desperate attempt for help. He collapsed on a landing and bled to death while his father held a towel over the wound.

The choking game, as it’s most commonly called, is an ill-conceived tactic used mostly by children and teenagers to “get a high without taking drugs,” London medical practitioner Dr. Steve Field told Time in a 2010 exposé of the sensation.

The act involves cutting off the flow of oxygen to your brain in an effort to achieve some type of natural buzz or light-footedness. Its pitfalls are obvious and well-documented, yet past horror stories have done nothing to dull interest in the activity. A YouTube search for “Pass Out Game” yields page after page of clips showing teenagers strangling each other in the name of good times, with some garnering as many as 30,000 views (although it’s not clear how many of those viewers have actually tried the game themselves).

“This is disturbing, highly dangerous, very risky, and the practice should be avoided at all costs,” Field told Time in 2010. “You can have an epileptic fit, you can go into a coma, and you can die.”

Just the same, Nuno’s story illustrates that the choke out game’s dangers extend far beyond the obvious risks.