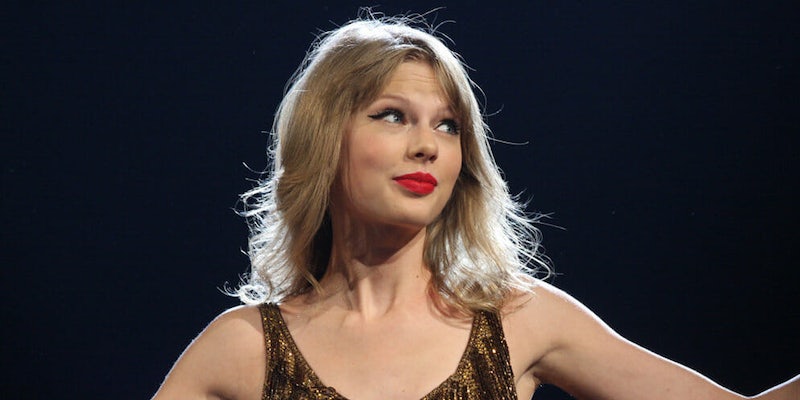 Not great for her reputation.

In 2015, Taylor Swift was caught red-handed out in public wearing a leather harness totally, ridiculously incorrectly. It was backward. No, seriously.

The Free People-branded fashion accessory, which Swift wore out to lunch with Selena Gomez, was a striking addition to her casual outfit, but it got people talking, all for the wrong reasons. Not only was she wearing it wrong, but it appeared to be a knock-off of another product.

When the photos first surfaced, Swift took to Tumblr to claim that she wasn’t wearing the harness backward (sure) and that fans needed to check out Free People’s website to educate themselves, apparently.

Of course, the tea there is that Free People was selling a knockoff of an original leather harness by designer Zana Bayne. It was messy, people laughed, the internet forgot about it. Until now.

The photo has resurfaced three years later on Twitter, and it’s not totally clear if Taylor has learned to wear a harness the correct way, but people still sure think her mistake is hilarious. Also, for the record, she clearly is wearing the harness backward.

It is backwards, and it's made for a woman about three times her size by more than a couple measures.

This hurts my soul

We know Taylor will probably just see this come up again and shake it off, but that sure isn’t going to keep us from laughing about it.

It isn’t even much of a lewk when worn like this, TBH. What were you or your stylist thinking, Tay-Tay?

Did you think it would be less terrible that you don’t fill it out if you flipped it around?

It would have looked so sick (like that beat you referred to) if you wore it the right way, let’s be completely honest.

The old Taylor can’t come to the phone right now. Why? Oh, because she’s dead (of embarrassment). At least, we would be.