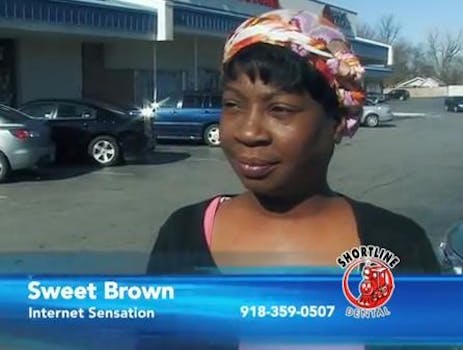 Sweet Brown cashes in on Internet fame with new commercial

Sweet Brown, who became an Internet meme thanks to her catchphrase "ain't nobody got time for that," has found time to star in her fourth TV commercial.

The woman who famously told news reporters “I got bronchitis. Ain’t nobody got time for that” has made time for her fourth TV commercial appearance.

Sweet Brown is one of the Internet’s most beloved memes thanks to an interview she gave on April 11, 2012, following a fire in her Oklahoma apartment complex.  While waiting outside, a local TV crew showed up on site to speak with residents.

“Well I woke up to get me a cold pop and then I thought, somebody was barbecuing. I said ‘Oh Lord Jesus it’s a fire,'” Brown told the reporters. “Then I ran out, I didn’t grab no shoes or nothing, Jesus. I ran for my life. Then the smoke got me. I got bronchitis. Ain’t nobody got time for that.”

Clips of Brown’s interview circulated around the web and turned the mother of five into an overnight Internet celebrity. The following YouTube clip, for example, has collected more than 17 million views.

And like other Internet stars like Blake “Scumbag Steve” Boston, Brown has tried to turn her fame into dollars.

She’s appeared in commercials for CJ Bail Bonds, Zert.com Canada, and 1.800.2.sell.homes, said Sparkell Adams, Brown’s representative. This fall, Brown will appear in Tyler Perry’s A Madea Christmas and will be a co-host on Cheaters, a hidden camera reality TV series. But until then, Brown has become the face of Shortline, a Tulsa, Okla., dental clinic.

Make some time and check out her new commercial.