Nobody can roast a rapper like the legendary Supa Hot Fire

The fire is still alive.

He spits fire better than Drake, Kanye West, Jay Z, and even Tupac. He isn’t the Notorious B.I.G., but he’s notorious. The magnitude of his skills engulfs us in a rap battle haze, yet he isn’t a rapper.

The “I’m not a rapper” YouTuber MrDeshawnRaw rose to fame after his parody rap battle videos stormed the internet in 2011. He took the traditional concept of confrontational showdowns—featuring two or more rappers dueling with brags, insults, and icy cold burns—and turned it into a satirical, exaggerated, hilariously executed version of a freestyle beef.

Fire’s lit crew never failed to worship him, knowing when to catch or carry Fire—or wipe the sweat off his forehead. Any line is followed by blaring “OOOOOOOOOOHS,” cementing the defeat of Fire’s adversary. Besides the one-time loss against Soulja Boy, he always, always wins.

The OG video (also listed below) birthed the soon-viral victory GIF, which looping the reaction to the first and arguably best diss spat by Fire at opponent B-Bone. It is now the de rigueur reaction to any online ownage.

The GIF’s resurgence of late can be partially attributed to the updated 2.0 version, featuring Barack Obama, Hillary Clinton, and Joe Biden at their own White House battle.

Fire’s illustrious career has earned him some spots in the Pokédeck, owning some serious attacks like The Wrong Numba, I Go First, and Career Ender. 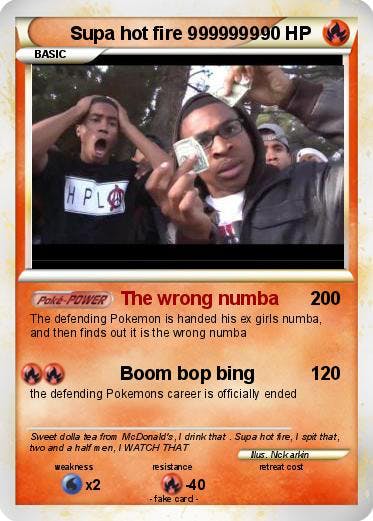 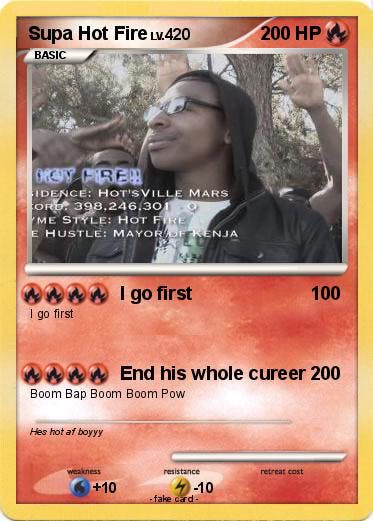 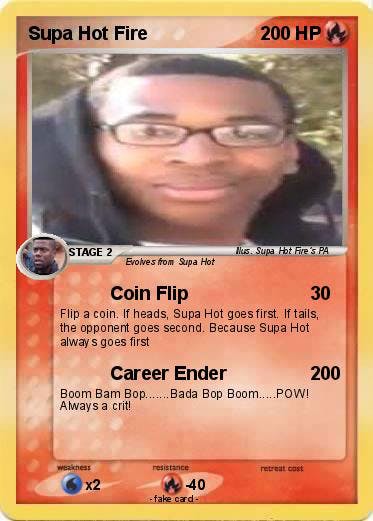 Luckily, Supa Hot’s fire never blew out, and five years after he first set the internet ablaze, YouTube still hosts his collection of epic rap battles. Let us honor the legend through these best moments, which inspire us to continue devotedly praying for the return of the only “rapper” who ever mattered.

1) “I broke up with my ex girl. Here’s her number. SIKE. THAT’S THE WRONG NUMBER!!!!” Faintly, in the background, you can discern one of his squad say, “How does that make you feel?!” It’s the first burn of the OG “Supa Hot Fire vs. B-Bone” video and, you might say, the best he ever spat.

2) “Sweet dollar tea from McDonald’s. I drink that. Supa Hot Fire. I spit that. Two and a Half Men. I WATCH THAT.”

4) “First of all, I’m not your friend. So stop looking at me. Second of all, I’m not a rapper, so stop rapping at me.” RIP to B-Bone’s career right there (he joins the squad later, anyway.)

1) “I get money, it’s nothing…” Epic moment as he rips up a one-dollar bill for all to see, proceeding to drop that shit on the flo’.

2) “Now you can’t win this battle. Cause I’m super hot, boy, and I’m sweating in this shade cause I’m Supa Hot, BOOOOOOOY!” His squad rushes to his aid, fanning him with hats and patting him with some tissues as they pour water over his head. Foreshadowing Tremendous Repeat’s demise early.

3) “Hearts. I break that. Sample from Costco? I TASTE THAT!” Costco is something of a running theme in the Supa Hot videos, with Chunk Dirty bringing back the store in their battle (see below).

5) Fire bombs Repeat with scat-like beats and a surprise grenade at the very end: “Bam boom, badabam boom bop. Ha boom, bam, KABLAM… POP!” He jumps back into the arms of his crew as they lift him into the air.

***HONORABLE MENTION: Repeat almost makes a mockery of Fire with his rhetorical question and surprise guest appearance. He asks, “You Supa Hot Fire? I’m the fire extinguisher!” pulling out an extinguisher from nowhere and spraying it vigorously into the air.

1) “I never take showers… without a loofah. Hot Fire… don’t forget the super!!!” He gracefully lifts his arms, Jesus style, and is carried up into the sky. BOOM.

***HONORABLE MENTION: Pretty much any time Mute Spittah “raps,” especially when he tauntingly pours out the soda and dances up on it.

1) “I never leave my house without my brodies. I never go swimming without my floaties!!!!!!”

2) “Glasses, jacket, shirt man. Or call me winner. And after I win, I eat my dinner!!!” A plate of mashed potatoes, broccoli, and some hot sauce, appears as if from nowhere, and Fire stares at the camera while he chews.

***HONORABLE MENTION: Chunk Dirty kills it with, “Costco… keeps the cost low. My flow is gnarly, you can’t top that. iCarly. I WATCH THAT.”