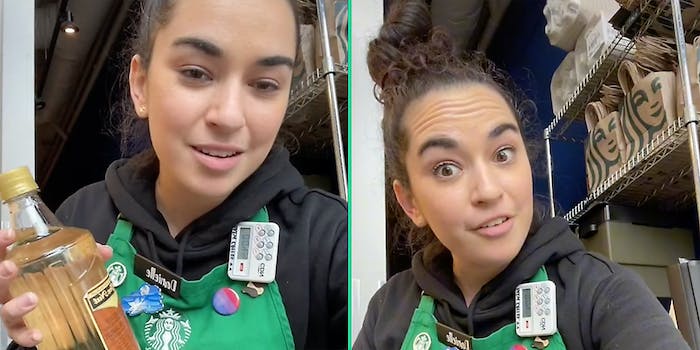 ‘Make sure you check the dates’: Starbucks worker issues PSA after learning production dates on some syrup bottles are almost a year old

'My store is too busy to care. Everything sells after a week.'

A Starbucks worker warned fellow baristas that the production dates on some of the syrup bottles her store recently received are over a year old.

“Make sure you check the dates,” Danielle Sanchez (@thehighbarista) says in the viral TikTok, posted less than a week ago.

Sanchez is a Seattle-based Starbucks barista and TikToker with over 8,000 followers. She regularly posts Starbucks-related content. Her public service announcement to other baristas received over 145,700 views.

“Stop and listen if you work at Starbucks!” the text overlay at the beginning of the video reads.

“OK, so during one of my lives today, another barista gave me some vital information,” Sanchez says. “So this week my store got all the syrups back. … But it was brought to my attention that I should check the production dates on these bottles.”

“Sure enough, some of these were made or produced in May of last year, which means they expire in March of this year,” Sanchez continues. “If you also got all of these syrups back in, make sure you check the dates; make sure you see when they expire.”

Many workers chimed in to say that even if the syrups expire soon, it shouldn’t matter given how quickly their locations are selling products.

“Thanks I didn’t think of this. But knowing my store they’ll be gone by the end of this month lol,” @spicyoatmilklatte said.

“Honestly, tho. I work at a retail store and here we are, mid January and we just got quite a bit of our Christmas stuff finally delivered,” @kenzie_wyman08 wrote.

“My store is too busy to care. Everything sells after a week,” @slowbr0 added.

The Daily Dot reached out to Sanchez via TikTok direct message and Starbucks via email.