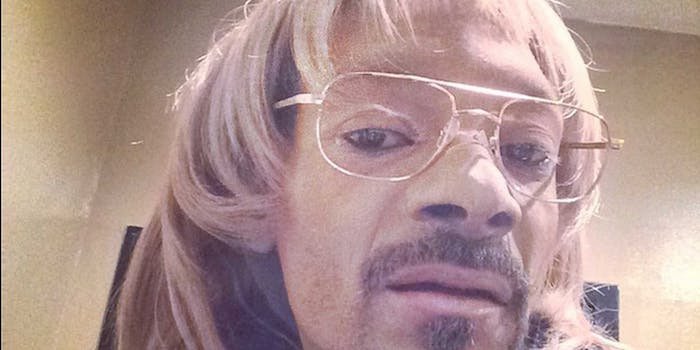 Snoop Dogg films himself as his alter ego, a white guy named Todd

Rapper Snoop Dogg has had various alter egos (remember when he was Snoop Lion for a hot second?) but his newest creation is even more out of the oridinary. In his spare time Snoop is filming clips of himself as Todd, a white guy pushing a fictional website called White Guys Connect.

Snoop has been posting pictures and videos of himself in whiteface as Todd since Aug. 28, which TrapBeatz has compiled into a minute and a half of Snoop doing his best white guy impression (he likes to “paintball, crochet and a little spoken word in [his] free time”) while pushing the fictional Web service that connects white guys with hot ladies.

We’re just as lost as you. First, why is it called White Guys Connect and isn’t connecting white guys with other white guys? Also, why Snoop is doing this? Like the mysteries of the universe, we may never know the answers to our pressing questions.  We can tell you that www.whiteguysconnect.com redirects to the Instagram for someone named rickiswinning, who has only four posts—a BMW, kale, a screenshot of a cheesy quote, and a Yanni concert clip. We’ll admit, that’s pretty white.