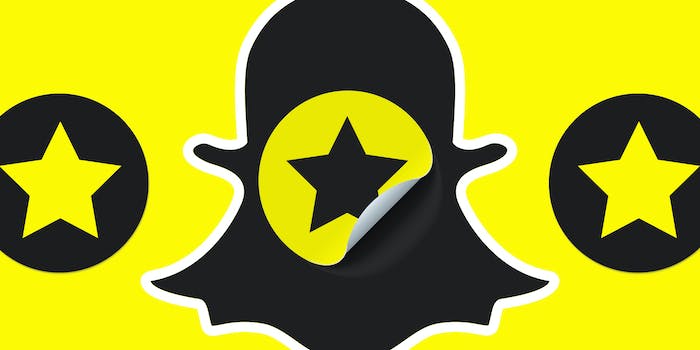 'I don’t think it’s a coincidence that only the Black creators from my roster had their Snap Stars taken away.'

A number of Black influencers say they have lost income and career opportunities after Snapchat removed their verification status for actions that white influencers have purportedly gone unpunished for.

Prasuna Chekru, an influencer manager at Diversifi Talent, told Passionfruit that at least seven of her Black clients had their verification status on Snapchat—which enabled them to access monetization opportunities—removed. According to a Snapchat spokesperson, these users’ stars have been revoked for violating aspects of Snapchat’s Terms of Service including sexually explicit content, impersonation, and spam. However, screenshots obtained by Passionfruit suggest that these rules have been enforced inconsistently.

According to Chekru, she was introduced to Snapchat staff by someone at a different management agency during the July TikTok strike, wherein Black creators refused to create content in protest of what they said was an unfair enforcement of community guidelines by TikTok.

In anticipation of calling Snapchat representatives for the first time, Chekru said she and some of the Black creators on her roster “provided a whole list of ideas of things Snap could implement within their algorithm, content, and even in-person activations surrounding social issues that would make Snap the best place for Black creators.”

“We specifically mentioned that community guidelines issues that disproportionately affect Black creators on TikTok is one of the biggest issues,” she added.

According to Chekru, these Snapchat representatives seemed “eager to listen” to her ideas, but when she sent them a list of ideas from the call, she said there was “radio silence for almost a month.” She added that staff members at Snapchat “jumped to the idea of just verifying the creators” right away.

“I was taken aback by why the team seemed so interested in verification but were not interested in taking actual steps to help Black creators,” she added.

Chekru also said that in a call with Snapchat staff, which included Chekru as well as a number of creators on Diversifi’s roster, the Snap representatives mentioned verification would come with opportunities such as brand partnerships and even potential in-app shows.

These creators allegedly had their verification, known as the “Snap Star,” removed for breaching community guidelines around promotions and posting “clickbait.” But according to Chekru, only the Black creators on her roster have been impacted by this ban. Meanwhile, the talent manager has identified five of her white clients, who post “very similar content” on Snapchat, that have not experienced any similar reprimands.

“I don’t think it’s a coincidence that only the Black creators from my roster had their Snap Stars taken away,” she said in an email.

For influencer Chris James, his experience on Snapchat “started off great.” He said, “I really thought they genuinely wanted to help Black creators get the recognition they deserve.” This all changed in January, however, when James received a warning from Snapchat for promoting “clickbait” content.

”I don’t understand why because I see everyone on Snapchat doing it,” he said.

Examples of “clickbait” content posted by James include promotional stories for brands and products or stories promoting other creators—content that white creators appear to have been permitted to post without the same level of scrutiny or discipline.

Two weeks later, according to James, they took away his Star. He told Passionfruit that the same seems to be happening with other Black content creators.

“It breaks my heart because I know most of these people deserve this recognition,” he said.

Niccolo Cagnolatti, another Black creator, shared an identical story to Chris. He says he was sent a “threatening message” by a Snapchat representative to stop posting content providing “shoutouts” to other creators. Then, after he and another Black creator promoted the Island Boys on their Snapchat pages, he alleges that a Snapchat representative told him they would be monitoring all the accounts of everyone represented by Diversfi Talent. He says that his Snapchat star was removed shortly after “with no warning or notice.”

“I didn’t even get a specific reason,” he added. “They just sent a generic email with a list of violations and said if any of the above listed applies, then that’s the reason my star was revoked.”

The other creator who posted the Island Boys promotion was allegedly penalized for impersonation, although Passionfruit has seen correspondence which suggests the collaboration was coordinated and approved by the Island Boys’ management team.

According to Cagnolatti, his Star being revoked has had a substantial impact on present and future prospects, harming his potential for sponsorships as a creator on the platform. He said it impacted his income because he was starting to make a “substantial amount of money” on Snapchat. Then, with his Star being removed, that income “stopped unexpectedly.” According to Cagnolatti, this is because without the verification, the algorithm stopped “pushing” his content.

“I got my Star along with a bunch of other creators in my management [Diversifi],” Warren said. “Back in October 2021, where Snapchat actually reached out to us to work with us directly because of the BLM [Black Lives Matter] Movement and its rise in popularity, and wanting to give Black creators a better opportunity to be seen.”

When he got his Snap Star, Warren said that a Snapchat representative told him to treat his verified account like a business profile. According to Warren, he was told by a representative of Snapchat that he was permitted to use his account for promotional posts and ads for companies he was collaborating with.

Warren says he got a warning about his Snap Star on Feb. 1 because an admin on his account was a user who had previously had their own Star revoked.

“This doesn’t make any valid sense, it looks like they were just trying to give any reason in order to take my Star away,” he said. “I was very careful. I was very strict, I was very limited on the number of promos that I was posting, and still knowing that promos are allowed because people are paying for a slot or our story as an ad, which is a part of our business. So it wouldn’t make any sense for us to get a Star and then not be able to make any money with it when they actually encouraged it.”

According to Snapchat’s Snap Star eligibility guidelines, the company states it has the right “to revoke verification or Snap Star status at our sole and absolute discretion and without advance notice.”

As well as this, Warren says he then got a “time-out” from his Snapchat the next day, not only because of the admin on his account, but also for using Snapchat for promoting products on his account. Warren called the move “hypocritical” because making money was “the whole point of us getting our Star and growing this platform.”

Within five minutes of receiving a warning about his account admin, Warren says he removed them from his account and informed Snapchat. But this was still cited as a reason for his Star getting revoked, along with breaching purported promotion guidelines.

“I was never, ever warned to not post promos,” he said. “So none of the reasons that they took my Star away was valid.”

He continued, “I think like now that the BLM Movement and everything has died down, they have gone back on their word of wanting to work with Black creators because now they’re taking a whole slew of Black creators’ Stars away: Some people get a warning, some people don’t.”

For example Jahsy Johnson, another Black creator represented by Diversifi, claimed that he didn’t receive any kind of correspondence before noticing his star was removed from his profile. “I never got a warning from Snapchat about any of my posts, one day they just took my star,” he said. According to Johnson, the majority of his Snapchat posts were just content promoting his Triller profile. “It’s just really confusing, I have no idea why they would take it,” he said.

Warren also claimed that there are a lot of popular TikTokers on Snap who “constantly promote.” However, he said those creators have not suffered repercussions from their promotions, which he believes is discriminatory. Passionfruit has seen numerous screenshots of a number of white creators appearing to promote products as well as discounts on their OnlyFans accounts on their Snapchat profiles. “It’s just weird how all of the Black influencers got all their Stars taken away, but still to this day white people just posting promo after promo,” he said.

This is something Chekru, manager of Diversifi Talent, also noticed. “It would be totally fine if Snap was very careful with their content and [removed] Snap Stars from anyone who is violating anything in their terms, but when I scroll through the Discover page, all I see is the same type of content that my creators post,” she said in an email. “So, I’m not sure why one group is being unfairly treated and the other is allowed to post whatever they want.”

A Snapchat spokesperson told Passionfruit that they regularly conduct audits on verified Snapchat accounts to ensure that they are following the platform’s community guidelines and terms of service. They claim that the users in question repeatedly violated the platform’s terms of service, and added that the company had purportedly discussed its concerns with Chekru in the past. The spokesperson also referred Passionfruit to Snap Star support site.

At the time of writing, the accounts belonging to white creators posting identical content to those who had their Snapchat Star revoked are still live, continuing to post similar content, and do not appear to have been impacted by Snapchat’s audits on verified accounts in the same way as Black creators.

“[Snapchat are] limiting just Black people. They’re suppressing us,” Warren added. “They reached out to us to work with us to fix these problems to bring awareness to Black creators’ issues while on platforms and unfair treatment. But here they are being hypocritical, and doing the exact same thing because now BLM is no longer beneficial for them.”

He feels that Snap failed to fulfill its promises to Black creators and instead began limiting them.

“Snapchat reps, in our meetings, guided us to do exactly what we were doing,” he said. “But, they slowly one by one started to put more limits on us once we got our Stars. We would follow the guidelines and they still found a reason to get mad. And I feel like it was just a personal vendetta.”

Warren added that he felt Snap had not provided Black creators with the resources or guidance to be successful on Snapchat. He described a lack of support and respect from the company, stating that representatives were “passive aggressive” in meetings with Black creators.

“Snapchat really wants to show and prove to the public that they stand with Black creators and support them,” he added. “But behind closed doors we were being treated like shit…. They just want to present themselves as an advocate and support system for my community in order to look good or better than other companies in the press.”

When asked by Passionfruit to provide a full, on-the-record statement in response to these claims, Snapchat declined to comment.