A treasure trove of hilarious quotes from an Internet Relay Chat troll lives on.

Back in 2005 I used to idle in an IRC channel with some internet buddies I met on DeviantART. These were the days when most people were using a client called mIRC, an ugly, Windows-only artifact of early internet communication. It happened to be quite extensible, and various communities were built around making scripts and plugins for it, the most popular of which was probably mIRCscripts.org. 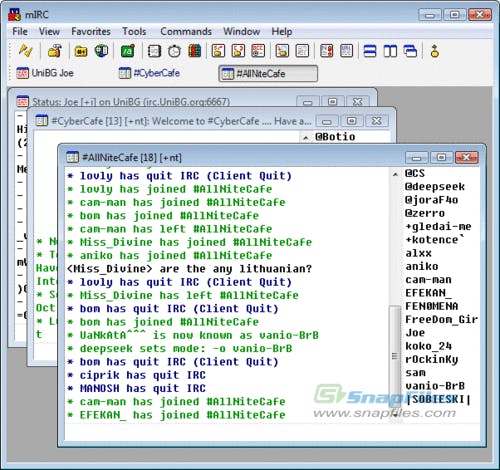 At one point or another, between updates to my DeviantART profile no doubt, I happened across a script that came bundled with a text file called sax0r.txt. The script gave mIRC a context menu from which you could select lines from sax0r.txt and send them to an IRC channel. A sample of sax0r’s offerings:

Much fun was had with it—I still have some favorite lines in my Alfred snippets today for occasional use—but we never figured out what exactly it was, or where it came from. I tried googling it a few times over the years, but never got very far. I also wrote up this Urban Dictionary definition of sax0r in 2005, where I described it as a tool for aggravating newbies. Trolling, in today’s parlance. But the Urban Dictionary entry was a complete guess—bullshit, honestly—and we never knew what it really was.

I think I answered that question today. The breakthrough was a forum thread I found from 2004 on mIRCscripts.org, where an administrator makes a post about a user by the name of tsoglanos29. It seems tsoglanos29 was a major problem on mIRCscripts, speaking in broken English, constantly rating down others’ mIRC scripts using sock puppet accounts, and leaving belittling, critical comments about the quality of others’ code. The administrator, dohcan, ends the post with a warning: “You can discuss this but if this thread degenerates into sax0r, it will be locked.”

I’ve taken care of him, since everybody and his brother’s pet gecko was telling me he was causing all these problems with ratings and comments and creating bogus accounts (and he was), but it’s not like the rest of you are innocent, with the constant replies and taunting with sax0r. In fact, I’ve seen several instances where other people have instigated the problems.

Normally, I don’t care, because it’s mostly just harmless screwing around, and he definitely brought a lot of the stuff on. I start to care when it starts to become a problem for me, which it has. He’s gone and I see no point in junking up the site with “sax0r” and “schit” anymore. If he comes back (which he probably will, since it’s virtually impossible to entirely prevent someone accessing the site) and this type of thing happens again… eg, I see “ATTN: DFP” threads, you’re just going to have to deal with his comments and low ratings. If, on the other hand, he “abuses” the site on his own, I will deal with it.

You can discuss this but if this thread degenerates into sax0r, it will be locked.

In addition to banning him, dohcan seems to have deleted most of tsoglanos’s sock puppet accounts and comment history too, but with this previously unknown snippet of information, I dug deeper. I found some of the sock puppet accounts—at least 3: DFP, shebax, peruliner, and some others unconfirmed—some old forum posts, his website, and a little more. (I also found a use of “tl;dr” from 2004, which was surprising.) As far as I can gather, he came to mIRCscripts some time around December 2001. He contributed some scripts to the website, as well as a lot of criticism of the scripts of others. In one post, a user claims he’s a 31-year-old Greek man, but I found nothing that would verify that. (Although Steven Callas informed me that his “tsoglanos” handle is a derivative of the Greek “tsoglani,” which, either fittingly or intentionally, is slang for troublemaker.) Most of tsoglanos’s contributions were in the the mIRCscripts IRC channel, though. 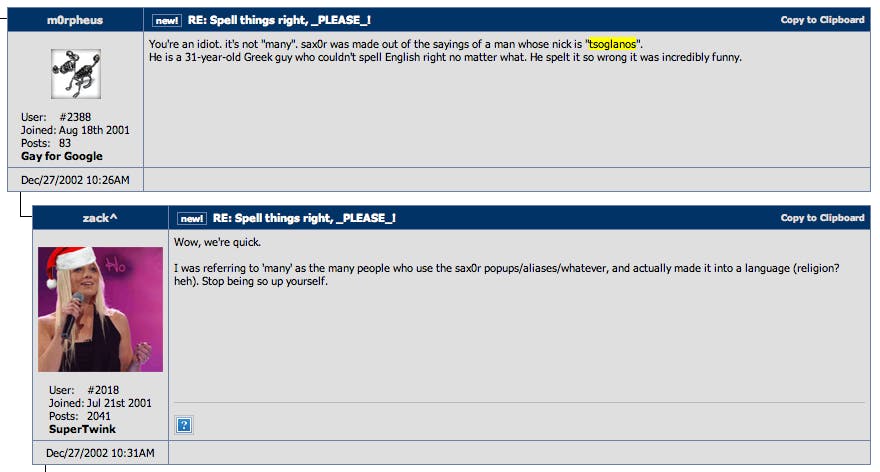 This is where things get a little hazy, since IRC logs from 2001 aren’t very easy to find on the Internet. It seems he was something of a regular there, an infamous regular in fact. As is common in small internet communities, member altercations were regular, and tsoglanos seemed to be behind a lot of them, in his characteristic broken English. He seems to have plagued the community for about four years, starting fights and insulting others, regularly taking offense at the slightest criticism and claiming to be under attack, and at some point in that time a group of members started collecting some of his more inscrutable utterings in a text file that was passed around. Over time the text file grew and it became common for threads on the forums to descend into nonsense as people re-pasted lines from sax0r.txt. 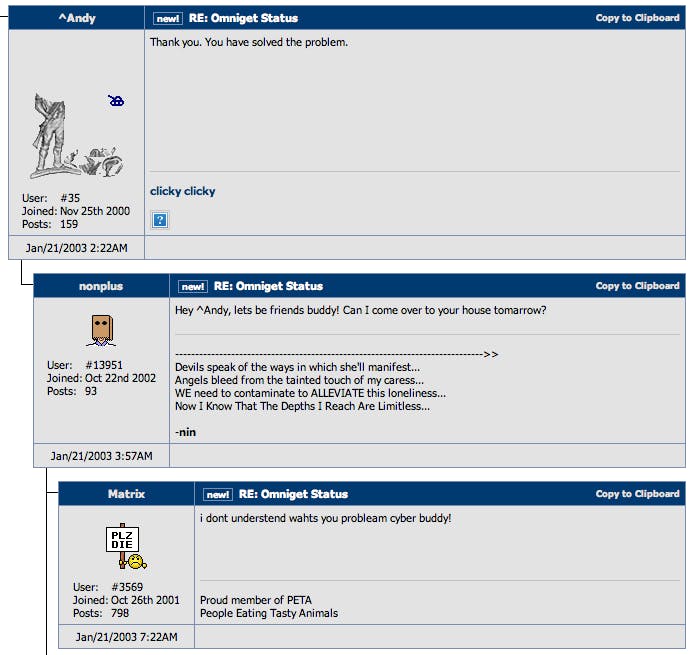 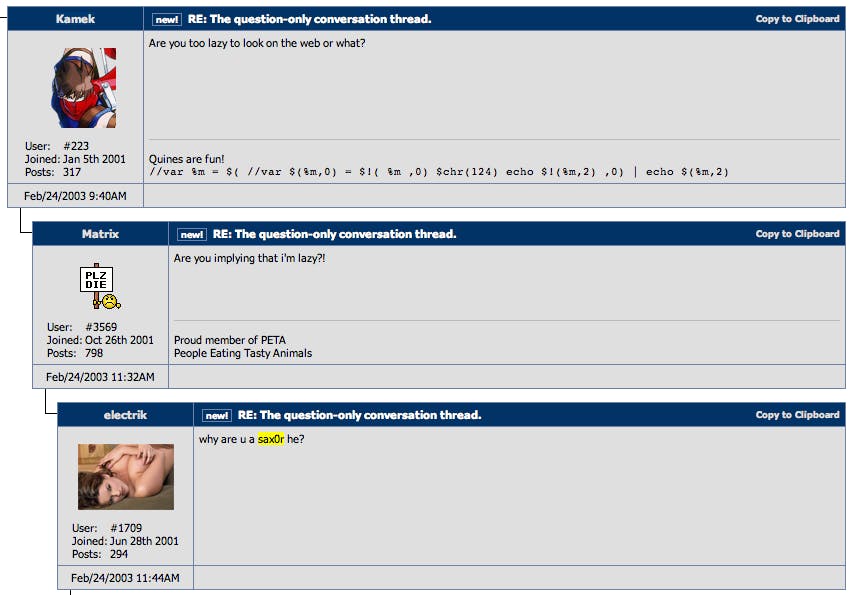 Eventually one of the users included the text file in one of his mIRC scripts on the site, and the rest is history. After his complete, site-wide banning, tsoglanos29 continued to pop up on the site occasionally under various aliases, leaving comments with his signature mix of broken English and critique, and almost always signing off with a mocking shout-out to the site’s administrators. “HELO FUBAR ITS ME DFP.”

Here is a pastebin of the full sax0r.txt. Please use it to troll your friends and help keep tsoglanos29’s legacy alive.

This article originally appeared on nostrich.tumblr.com, under the title “Prepare for sum good engleesh without sense :p.” Dick Wisdom is a full-time curiosity architect from New York.