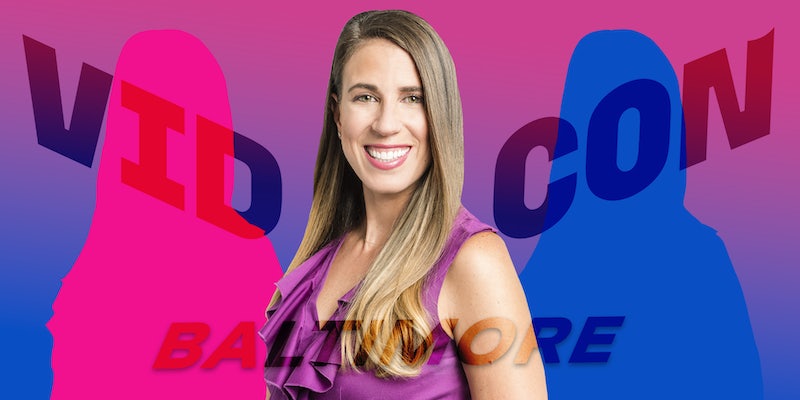 We’re sitting down with leaders on the business side of the creator economy to get their best advice for creators looking to launch and develop their careers. This week, we spoke with Sarah Tortoreti, senior vice president of marketing and communications at VidCon.

Last week, VidCon—the well-known digital creator convention held in various locations across the world and annually in Anaheim, California—announced it will be launching a new convention next year in Baltimore from Sept. 29 to Oct. 1. Tickets go on sale April 11, 2023.

We spoke with Tortoreti about the decision to bring VidCon to the East Coast, the location choice, how the two U.S. conventions will differ, how creators should decide which convention to go to, and more.

VidCon was co-founded by YouTube legends Hank and John Green in 2010 as a place for video creators, fans, and industry professionals to meet up and discuss their work. Originally California-based, the convention in its early days was centered around YouTube stars and fandom—with YouTube as its title sponsor. However, after the convention returned from a two-year pandemic-related hiatus in June 2022, TikTok demonstrated its prowess taking over as the convention’s title sponsor.

Beyond Anaheim, VidCon has attracted creators across the growing global creator economy. In September, VidCon debuted in Mexico City for the first VidCon Mexico. VidCon has also launched conventions in Australia, Spain, the United Kingdom, and the United Arab Emirates. It is planning to launch a convention in São Paulo in 2023 in addition to its new Baltimore event.

Sarah Tortoreti, who joined VidCon from her marketing director role at Nickelodeon after its parent company Paramount acquired the event in 2018, shared new details about the company’s hopes for the East Coast offering.

Tortoreti told Passionfruit that VidCon’s expansion to Baltimore is a part of ongoing efforts for the brand to expand its location offerings. She said VidCon picked Baltimore in particular due to its centralized location with easy access to multiple major cities on the East Coast—including Washington D.C., New York City, Philadelphia, and Pittsburgh.

“It allows us to provide a whole new group of diverse creators, industry leaders, and fans with the unique VidCon experience. It’s a city focused on cultivating creativity and as VidCon continues its efforts toward domestic and global expansion, we chose this market because we believe it will bring the culture of the East Coast creator economy to life, with room to grow,” Tortoreti said.

In reaction to the news breaking of an East Coast convention in Baltimore, some folks online questioned why the location wasn’t chosen to be another larger city like New York City—arguably the biggest East Coast hub for creators, their fans, and industry leaders. When asked why VidCon wasn’t heading to NYC, Tortoreti reiterated that Baltimore is accessible from a variety of large cities, including NYC, and also said it is a city that “can grow with VidCon.”

Al Hutchinson, the president and CEO of Visit Baltimore—a nonprofit which works to attract tourism to the city—told Passionfruit he is excited for the convention to take place.

“We cannot wait to showcase our beautiful city and make this program accessible to a new region of attendees and talent. Baltimore is fueled by a diverse population of cultural arbiters, skilled tastemakers, and social entrepreneurs. With Baltimore’s rich history, culture and authentic creative community, we hope to continue cultivating Baltimore’s creative talent through this partnership as well as show attendees why Baltimore is a great city for content creators,” Hutchinson said.

When asked if there will be any notable differences between the Anaheim and Baltimore conventions, Tortoreti said they will be similar—still featuring the signature “community track” for fans and “industry track” for creators and professionals. However, Tortoreti said each convention will lean into unique cultural elements of each city.

“Our hope is to differentiate the Baltimore event a bit by leaning into the creators and the culture that differentiates the coasts without straying from the magic of the VidCon experience,” Tortoreti said.

While many fans have taken to Twitter and TikTok to express their excitement for the event in Baltimore, industry professionals also seem to be gearing up to take advantage of the expansion.

One brand that took VidCon by storm in Anaheim in June was Jellysmack, a company which aims to help video creators with audience growth through multi-platform distribution, funding, and content strategy. Jellysmack was an event sponsor, hosting multiple panels, parties, a booth, and a lounge at the convention. Amber Tarshis, chief marketing officer at Jellysmack, said the upcoming expansion to Baltimore is particularly exciting for marketing professionals.

“Jellysmack has participated in VidCons all over the world; the conference truly is one of the best places for creators to meet and engage fans. We’re excited the event and its electrifying energy will now be more accessible to creators and fans on the East Coast. For marketers, a second VidCon in Baltimore is additive and gives brands the opportunity to participate in new creative ways,” Tarshis said.

Another group which made a splash at VidCon 2022 was Smosh, whose team spoke at a panel about “OG creators.” As previously covered by Passionfruit, Smosh is a legacy YouTube comedy brand that has turned into a full-blown company in recent years—adding an entourage of cast members and expanding into new short-form avenues like TikTok. Daniel Tibbets, CEO of Smosh, told Passionfruit he’s also looking forward to VidCon’s East Coast expansion.

“VidCon adding Baltimore as a destination means more opportunity for our partners and fans to engage with our brand and talent, by making it more affordable and accessible for those on the East Coast,” Tibbets said.

“No matter what convention they choose to attend, they will have a great experience. With every new city, we make sure to create culturally relevant programming and conversations, which will certainly play a factor in decision making, as well as the opportunity to engage with fans, peers, and industry execs that may have not been able to travel to the West Coast for previous U.S. events,” Totoreti said.

Tortoreti also said creators might consider how each event might offer perspectives on different timely issues and conversations in the rapidly-changing creator landscape.

“Though only a few months apart, the creator economy evolves constantly, and VidCon is always a reflection of the current state, so any attendee can expect that to also be a differentiating factor,” Tortoreti said.

While any creator can buy a pass for VidCon and attend, only a handful of creators will be selected to be featured as panelists and invited for special events. When asked, Tortoreti did not comment on how exactly creators can stand out to get featured or noticed by VidCon’s outreach team.

“Our talent team is hard at work putting together a lineup of the top creators to attend both US events this year, and I have full confidence both events will be can’t miss because of the creators in attendance!” Tortoreti said.

Do you work behind-the-scenes for a major creator event? We want to hear from you. Email [email protected] for a chance to get featured in an upcoming newsletter.