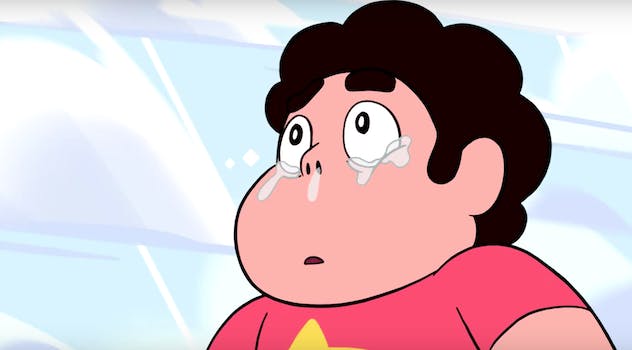 These edited videos show the dark side of your favorite cartoons

Inside the world of sad cartoon edits.

There’s a scene in the ‘90s Nickelodeon cartoon Rugrats where Stu wakes up in the middle of the night to make chocolate pudding. “It’s four o’clock in the morning,” his wife exclaims. “Why on Earth are you making chocolate pudding?” He responds, “Because I’ve lost control of my life.”

It’s one of the many edited cartoon clips featured on Heartbreak Club’s Instagram page. The cartoon’s original soundtrack is replaced with rapper Trippie Redd’s “Taking A Walk.” As Stu stands in the kitchen looking tired and sleep-deprived, we hear the lyrics: So I think I wanna die, yeah, ‘cause my doors are suicide, yeah.

Huh. This isn’t the Rugrats I remember.

Heartbreak Club is just one of several Instagram pages and YouTube channels devoted to making sad, depressing edits of cartoons, from Adventure Time to Rick and Morty. While each uploader is different, all the videos usually involve editing cartoons to make them look moody and dark, while including songs from emo rappers like Lil Uzi Vert and Joji.

On the Instagram account why.upset, Regular Show’s Mordecai is edited to look suicidal as he agonizes over a broken heart to Logic’s “1-800-273-8255.” Meanwhile, on moodcartoons, the self-deprecating humor of Charlie Brown is edited away to make him look authentically depressed as he spends sleepless nights tossing and turning to sad, lo-fi hip-hop music. “I love how sad this makes me,” a commenter writes under the video.

Although “depression as aesthetic” has been widely criticized for romanticizing mental illness, the addition of nostalgic cartoons is definitely a novel trend that has been littering YouTube and Instagram lately. Back in 2015, it was the “sad girl” that monopolized melancholic memes on the internet, reducing depression to a quirky Tumblr style that involved sad French films and copious #PrettyWhenYouCry selfies. But the rise of #SadCartoonEdits is one that looks backward, getting most of its inspiration from nostalgia and the sad longing for “better” childhood days.

The first pieces of it started to appear in 2017. YouTube channel N O S T R A D A M U S uploaded a video titled “b r o k e n” that featured a clip from Tom and Jerry where Tom contemplates his life after getting his heart broken. Other YouTube channels soon followed, but they weren’t quite the same as the videos being shared today. Back then, the videos all had the same lo-fi aesthetic recycled from the Vaporwave scene. Vaporwave, which was at its peak in 2011, often featured ambient electronic music paired with nostalgic ‘80s and ‘90s motifs, like retro computer graphics and VHS static.

However, like all things invented by the internet, by 2015 the scene had become a meme. With YouTubers using the trademark Vaporwave aesthetic to create parody videos, it wasn’t long before people started making memes that merged Vaporwave with The Simpsons, creating the brief but bizarre musical subgenre dubbed Simpsonwave. “Simpsonwave is the chill summer soundtrack you didn’t know you needed,” The Verge declared back in 2016.

But while the Simpsonwave fad focused on the nostalgic longing for the past, overlaying classic scenes from the show with chill, ambient music, somewhere along the way things took a darker turn. Popular YouTubers like the bootleg boy started uploading Simponwave videos with titles like, “s u i c i d e” and “X A N A X  & C H I L L.” As the videos started to spread to Instagram, they took on a different iteration. The retro aesthetic and vibe-y electronica was gradually replaced with flashy editing and emo rap music, nestling its obsession for melodrama under hashtags like #depressionedits and #sadedits. These days, heartbreak and loneliness seem to be the dominant theme of cartoon edits. However, when these videos start using Goofy cartoons to romanticize suicide, it’s not hard to see how this can be unhealthy for its mostly teen fanbase.

But not all cartoon edits are eager to exploit the “depression as aesthetic” meme. YouTube channel Dark Simpsons edits old Simpsons episodes to create entirely new (albeit disturbingly darker) narratives. There’s no emo rap or flashy editing—just an incredibly impressive repertoire of Simpsons knowledge. Even accounts like SadCartoonEdits have started segueing away from sad edits into general edits and even #loveedits.

But possibly the real reason behind the rise of sad cartoon edits is its propensity to soothe.

“Heartbreak Club is not just a place to feel broken; it’s also a place to heal,” the anonymous owner of the Instagram account writes on their website. “Heartbreak Club was intended to help those that are struggling through my ‘art’, messages, and community.”

However, some might think the scene is nothing more than a stylistic depiction of those angsty, formative teenage years. As Bart Simpson once said in the iconic “Homerpalooza” episode, “Making teenagers depressed is like shooting fish in a barrel.”

The internet just makes it a lot easier.

Tiffany White is a freelance writer who's been published in Vice, HuffPost, and elsewhere. She covers pop culture and "weird Internet stuff"—whatever that is.