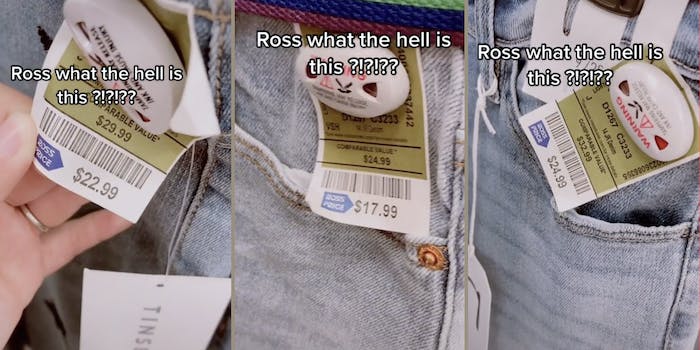 'I'm not spending that kind of money in Ross'

A TikToker added to speculation that TikTok has something to do with what’s perceived as the increasing popularity of Ross—and, as the user posited, increasing prices.

Ross may use the tagline “Dress for Less,” but TikToker @frijoleraaa contends that the prices are rising at the self-proclaimed “nation’s largest off-price retail chain.”

The video was posted with the caption, “I remember when pants were 8$ , might as well go to the mall,” functioning as a thesis that carried over its short-but-sweet content.

The seven-second video starts with the text-to-speech feature reading the on-screen caption, “Ross what the hell is this?!?!??” It shows Ross price tags for five different pairs of jeans that range anywhere from $16.99 to $24.99. It’s appropriately soundtracked to a snippet of “Hell to Da Naw Naw Naw” by Bishop Bullwinkle.

It’s been on the platform for several weeks now, garnering more than 1.6 million views in its life there—joining an impressive amount of Ross-releated content.

Commenters had a field day with the video.

“It’s not ‘dress for less’ anymore,” one commenter lamented, but then adding that jeans at Ross had always been that price—something that the TikToker contended was not true, but was a source of great debate in the comments page.

A number of people suggested DD’s Discounts, a sister store to Ross which apparently had the deals that the TikToker mourned.

Someone sniffed at the prices in the video, contending they were “Marshalls/TJ Maxx prices,” and taking a shot at Ross in the process, adding, “I’m not spending that kind of money in Ross w/their poor customer service and filthy dressing rooms.”

One pointed the finger at a very specific target, noting, “It’s ’cause of the white bitches on TikTok who kept making videos telling MFs to run to Ross.”

The TikToker jumped into the comments to concur, “Righttt.”

The Daily Dot reached out to Ross and the TikToker for comment.