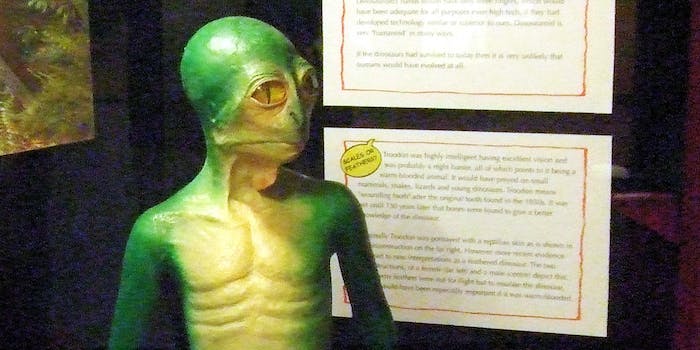 There's a sensible explanation for why Justin Bieber looks like a reptile in this video.

Ah, reptilians, a classic of the conspiracy-theory genre. Compared to the frustrating obstinacy of 9/11 truthers or the mundanity of moon landing deniers, there’s something beautiful about the fervent belief that the world is secretly controlled by a cadre of reptilian aliens in human skin-suits.

The reptilian theory was originally popularized by British soccer player, politician, and public speaker David Icke, although it has spread thanks to online conspiracy enthusiasts. If you’ve ever seen a conspiracy theory website or video, you’ll know that video glitches and dodgy screengrabs are a staple of the art. If Justin Bieber’s eyes look kind of weird in blurry footage from his arrest video, what possible explanation could there be other than his secret reptilian form briefly shining through?

On the contrary, sometimes a glitch is just a glitch. This video is sure to disappoint reptile-overlord conspiracy theorists with its far more sensible explanation.

As this YouTuber explains, these supposedly reptilian clues are actually just the result of video compression. While we’re not overly confident about learning from a guy who inexplicably paints half of his face silver, his information does check out.

It’s good to know the real reason for this type of video glitch, although we doubt it’s going to win many arguments with true reptilian believers. Once you’ve decided that Justin Bieber is secretly an alien overlord, you’ve probably graduated to a realm without logic.

Photo via Jim Linwood/Wikimedia (CC BY 2.0)