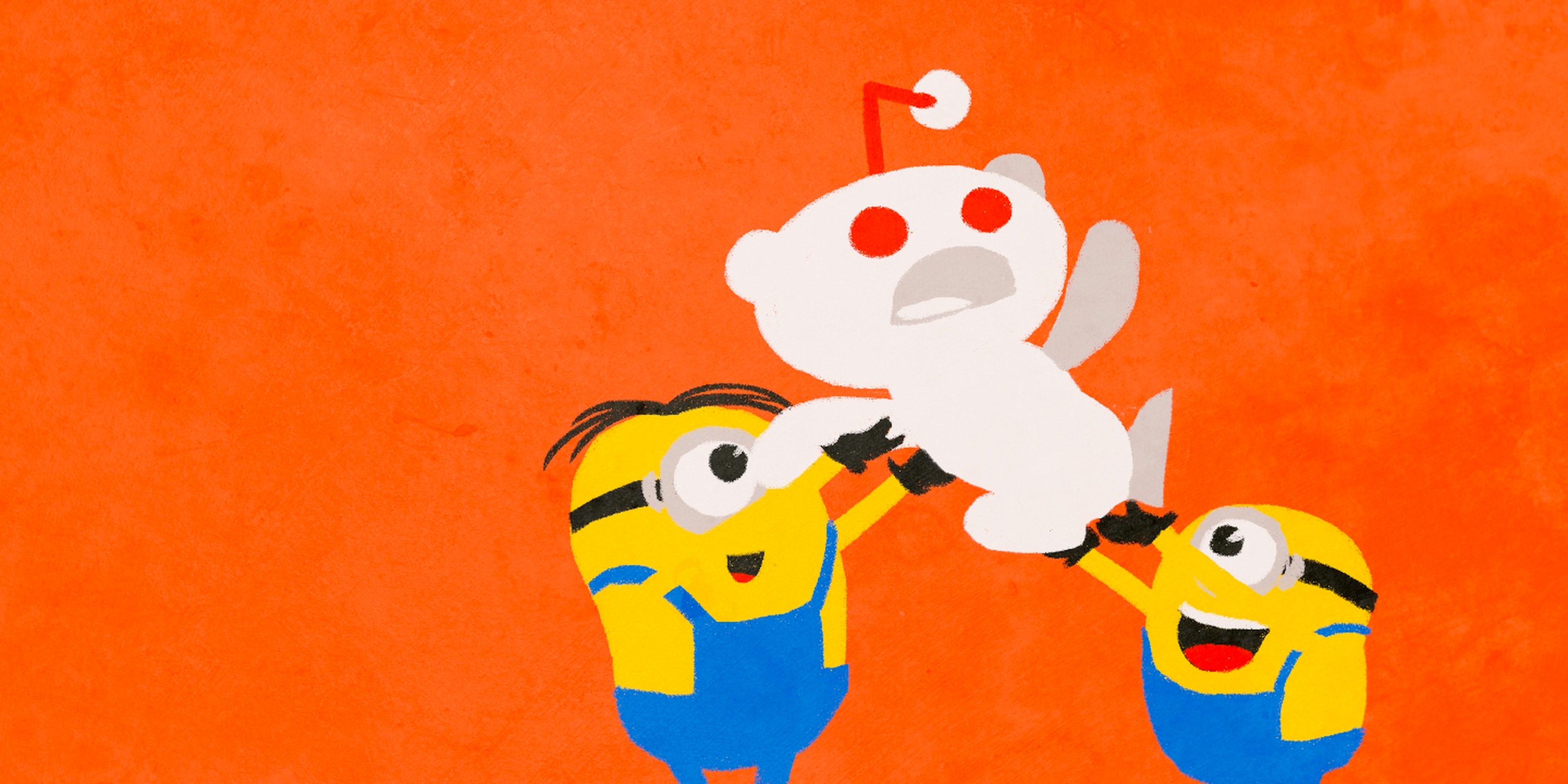 How one hateful subreddit became a fallen city of Minions memes

This took a very strange turn.

The Internet moves in strange and mysterious ways. There’s something profound about a massive, anonymous community obsessed at keeping a very, very silly joke alive.

It doesn’t even have to make sense, so as long as it’s visceral. It’s why I can find hundreds of pictures of pro wrestler John Cena on r/potatosalad, and hundreds of pictures of potato salad on r/johncena. It’s not a conscious decision—it’s impossible to calculate the desultory chaos of Internet meme-making—but the hivemind still thrives without the meddling phoniness of thoughtful comedy.

So, let’s talk about r/punchablefaces.

This is basically a dead subreddit. If you go there now, you’ll see a bizarre carcass of aunt-level Minions chaff and a bunch of people wondering what the fuck happened.

But once upon a time, r/punchablefaces was a place to post photos of the people or characters who, well, have punchable faces—like pharmaceutical CEO Martin Shkreli or Sid from Toy Story.

Pretty above-board right? You probably theorized something like r/punchablefaces existed without ever verbalizing it. It’s a place you could go for some entry-level lols, which is basically the entirety of Reddit’s ethos.

And six months ago, things started to get a little bit dark(er).

From what I can gather through stray secondary sources and Internet paleontology, r/punchableface was increasingly inundated with progressively more racist and sexist posts, united under that tiresome “anti-SJW” banner. This coincided directly with the Ellen Pao fiasco last year, in which some redditors launched a smear campaign against the site’s CEO after a couple of especially vile and hateful subreddits got shut down. Among the subreddits to host violent threats against Pao was, of course, r/punchablefaces, an ideal platform for harassment.

“Where I live, the timezone is CET (Central European Time). During the time I had been sleeping, the sub had been raided by people posting pictures of Ellen Pao,” recalled one of the sub’s moderators, who asked to be referred to only as J. “I had to close down the sub and remove around 200 posts containing pictures of Mrs Pao.”

Nine months ago, Kalibering, the sub’s moderator, set the community to private and deleted all of the Pao-related posts. He also decreed that anybody posting about Pao would get slapped with a permanent ban. You can read his whole post here, but I’ve excised the highlights below.

“Any posts regarding Ellen Pao (that isn’t a serious discussion mentioning her) will end in a permanent ban. No questions asked, no “I’ve learnt my lesson”, no nothing. This isn’t your new “safehaven” for posting about your disliking of fat people. Neither is it your place to hate on the reddit CEO. It isn’t my (yes, I say my since the other two mods are banned) job to clean up your shit. To the users calling me a hypocrite for removing the posts of Ellen Pao, it is obvious that you have not read the rules or the, very short, description of this sub. And if you, against all odds, actually read them, you have not grasped the idea. The reason behind the rules is the fact that this isn’t your “I hate this person” sub. Never has been and never will be. There’s a reason why Bryan Silva and the smug bunny has been in the sidebar. They actually have faces that make you angry.”

Naturally, this stirred up the troglodyte masses even more, but in their defense, they expressed the antipathy in a pretty hilarious way. Out of some bizarre, malformed protest, r/punchablefaces became a hub for Minions content, officially the most cancerous moiety of the Internet.

It’s hard to know why that makes sense, but it kinda does, right? Angry Internet Men circling the wagons, using the absolute worst thing to express their solidarity. 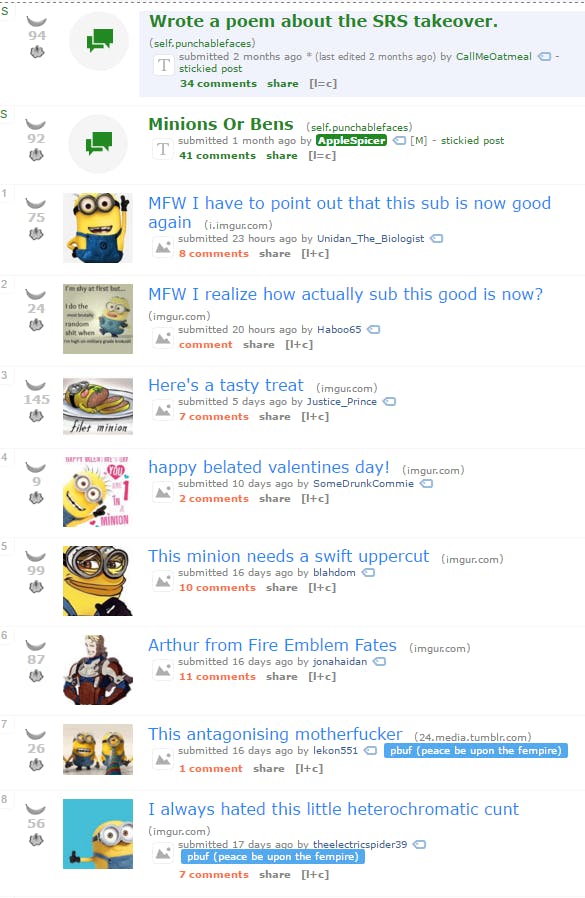 Somewhere along the line, the sub’s guidelines were changed  to include: “You can only post images/videos we won’t ban you for,” and “Minions ONLY.” Perfect!

The best thing about the subreddit now are the people completely divorced from all the drama, wandering into r/punchablefaces and witnessing a totally bewildering meme holocaust. The posts are evenly divided between people eager to share Minions and those still wondering what the hell is going on. The earnest posts of dejected curiosity are the best.

“What actually happened? I’m out of the loop,” wrote user The Vylance. “This sub had actual faces at one point.”

“The car’s on fire, and there’s no driver at the wheel. And the sewers are all muddied with a thousand lonely suicides,” responded K3B.

“Fucking feminism happened. Fucking Essjaydubyas happened. This once glorious sub has been reduced to bullshit minion memes and circlejerking. Everyone seems to think that this sub is good now, well it’s actually NOT. This is why we need to band together as a community and root out the cultural marxism that is ruining our community. This sub is the frontline in the pussification of Western Civilization. And we lost,” railed user asmartguylikeyou.

Actually, you know what? What gives me hope amid the anarchy of r/punchablefaces is the slogan that emerged from the Minions pestilence: “This sub is actually good now.” I’m inclined to agree. R/punchablefaces is a fallen city. It’s a broken ideal. It’s the Pompeii of Reddit, and I love it.