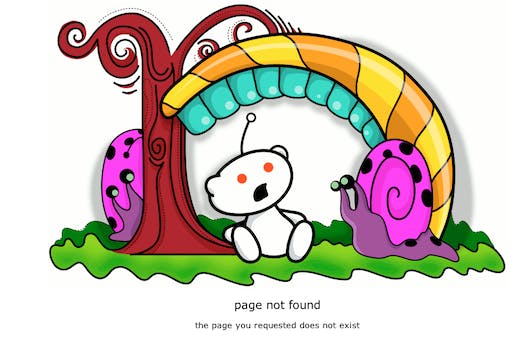 The move effectively decapitates some of Reddit's biggest NSFW forums.

At least three of Reddit’s most prolific moderators of porn-related communities have been banned from the site over alleged bribes.

The move effectively decapitates some of the social news site’s biggest not-safe-for-work (NSFW) subreddits, which see hundreds of thousands of visitors a day. But it also highlights an inherent flaw at the heart of Reddit’s management system, which relies almost entirely on volunteer workers.

Before his account was banned, Scopolamina had accrued more than 1.85 million karma points—Reddit’s internal scoring system to measure popular submissions—making him, by that metric, the site’s most popular user. The communities he moderated boasted roughly 2.2 million combined subscribers.

Scopolamina and his cohorts join SolInvictus, whose real name is Ian Miles Cheong, as influential redditors accused and banned from the site for allegedly selling their influence to spammers.

On Wednesday, Marta Gossage, the person in charge of Reddit’s community operations, announced the decision via a self-post on r/redditrequest.

“A spammer sent a few dozen mods the same message asking for approved submitter/all submissions approved status in return for weekly payments,” wrote Gossage, who goes by bitcrunch on the site. “Numerous moderators reported that message to us, and upon investigation we found that four NSFW mods had actually respond positively to them. Two of them exchanged paypal information, another exchanged email addresses, and another quibbled about exactly how it would work.”

“And that only the start—we also found vote cheating and spamming by a few of the same mods.”

I reached out to Scopolamina, who has always been adamant about not divulging any personal information for the sake of his “personal and professional safety,” to get his side of the story. Over the course of various Google Chat sessions and one phone conversation, he insisted that he was unjustly targeted. And that’s the flaw at the heart of Reddit’s internal judicial system. As a user, you might devote countless hours to the site, but make one mistake—or something that Reddit administrators interpret to be a mistake—and you can be banned immediately. Reddit staffers are judge, jury, and executioner.

Scopolamina admits to having a secondary Reddit account to upvote his own submissions, a practice prohibited by Reddit because the first couple of votes directly affect how visible a given post may be. However, he vehemently denies ever agreeing to partake in the pay-to-play scandal. To prove that he’s innocent on this last charge, Scopolamina provided us with various screenshots of private conversations he’s had with the user wanting to pay him to scam, other moderators heading NSFW subreddits that were also contacted by said individual, and exchanges with the site’s administrators concerning his ban.

At the crux of the controversy is pow3romania, a since-banned user who approached multiple NSFW moderators separately and offered them $100 a week if they placed his account in the “approved submitters list,” an act that would make it easier for his spam to show up on the front pages of the subreddits.

Of course, pow3romania lied in his postscript about only reaching out to one moderator. This became apparent when several of them discussed—and dismissed—the offer via a mail thread between several prominent NSFW moderators. 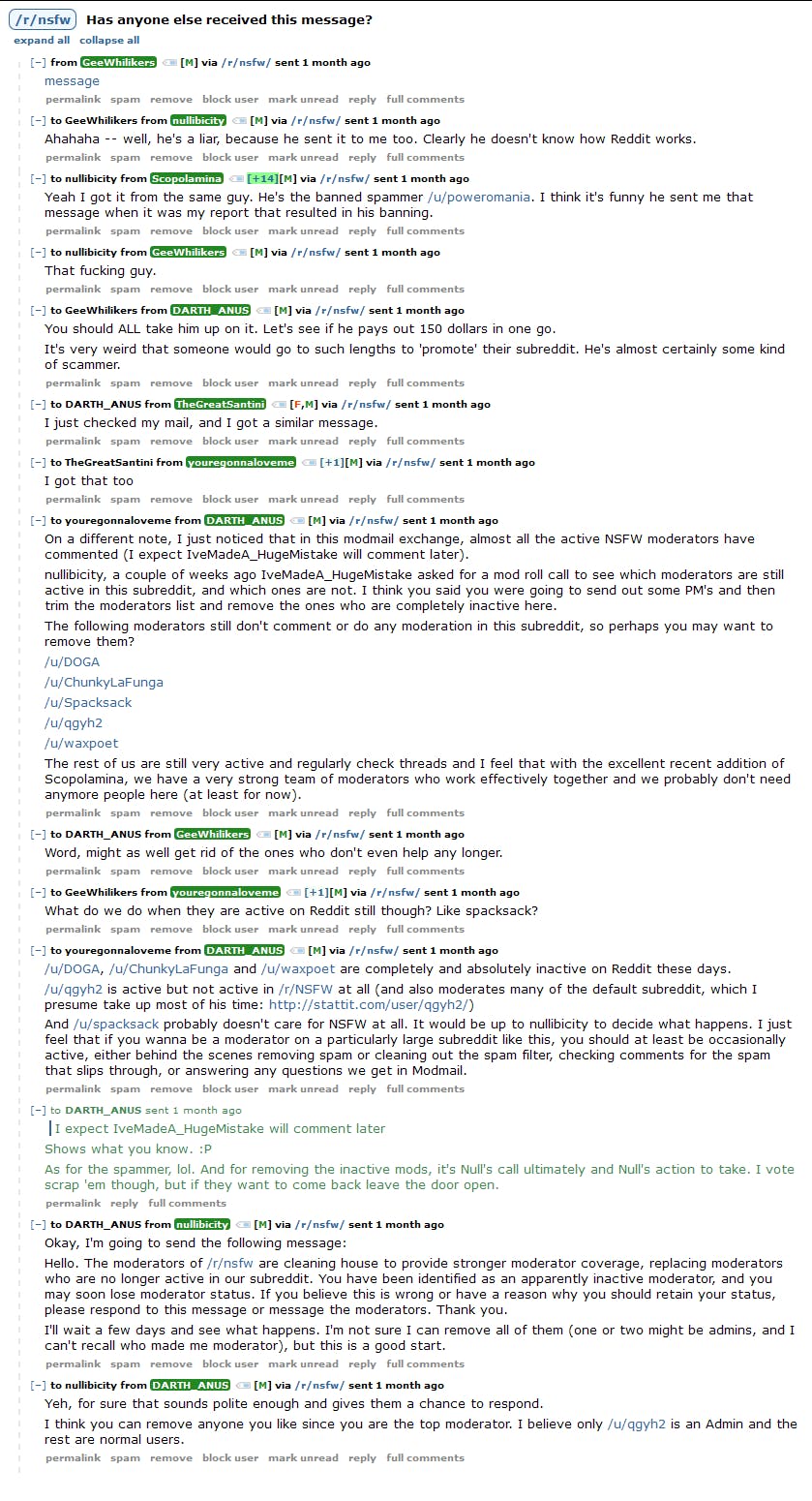 Scopolamina was quick to point out that he had previously helped ban the spammer when he operated under another alias.

I reached out to pow3romania via Skype, but he or she did not respond.

He created two secondary accounts that were immediately banned. But after creating a third, Scopolamina was finally able to reach a Reddit staffer.

The first to respond to his inquiry was Reddit’s community outreach manager, Alex Angel (or Cupcake1713 on the site). Angel informed him that the administration had taken disciplinary action against his account because of the aforementioned conversation with pow3romania in which possible payment was discussed. Scopolamina disputed the claim and cited his anti-spam history as defense.

Marta Gossage chimed in, noting that out of all the moderators who received pow3rmania’s message, the only ones who responded to the spammers took payment. Once again, Scopolamina ardently denied this accusation, and insisted that staffers further discuss this decision.

On Dec. 23, Scopolamina convinced Angel of his innocence. In turn, she reinstated him, with the condition that he no longer comoderate any communities with the two other accused and that he not maintain a secondary account for the sake of upvoting his own submissions. 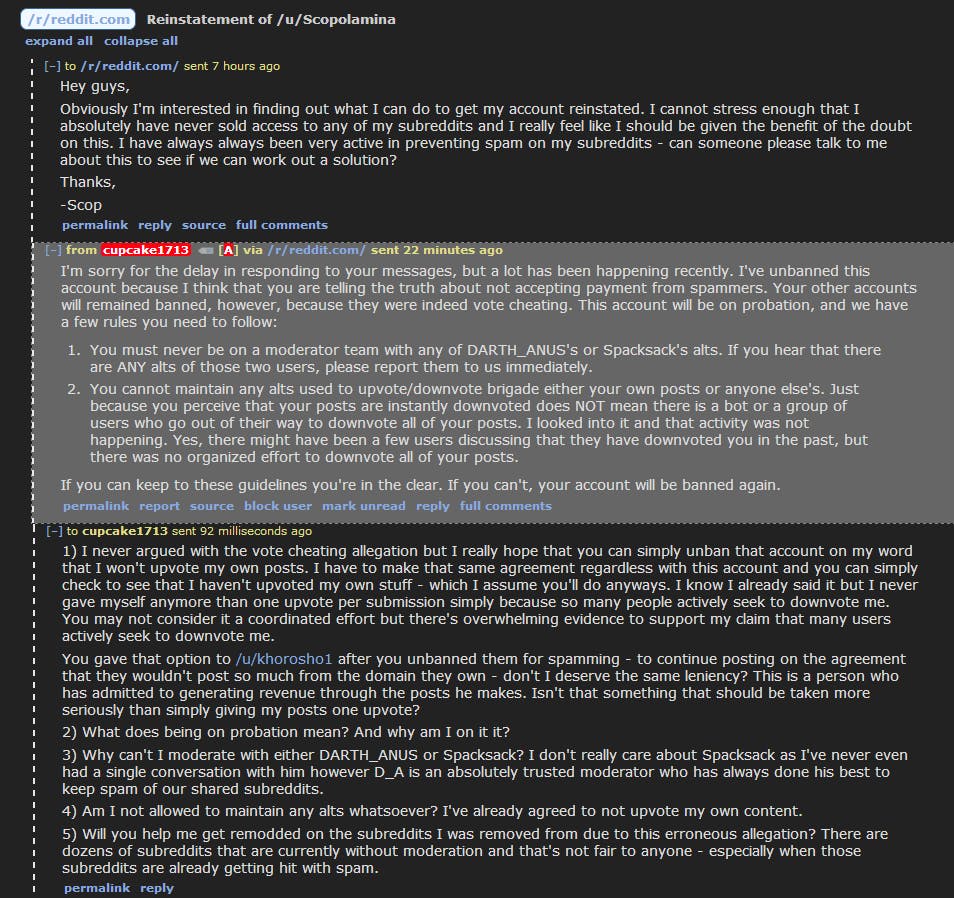 Scopolamina was back on, albeit at a reduced capacity. On Jan. 8, however, his efforts to get his account reinstated were undone when he asked the site’s administrators to be put in charge of several subreddits that did not have a moderator because of his prior deletion. Gossage’s response was curt:

“Take only the subs you have right now, try to be very careful who you appoint as co-mod, and keep your nose clean and over time, trust in you can be built again,” she wrote. “But right now, you need to stop harassing staff, and just have fun on the site with what you have.”

Instead, Scopolamina responded with a point-by-point rebuttal.

A day after responding to Gossage, and two weeks after being reinstated by Angel, Scopolamina was once again banned from Reddit, this time for good. When he asked why, Gossage brought up the pay-to-scam debacle and a new accusation of breaking into other users’ accounts.

Scopolamina sent a handful of final private messages to Gossage but those went unanswered. 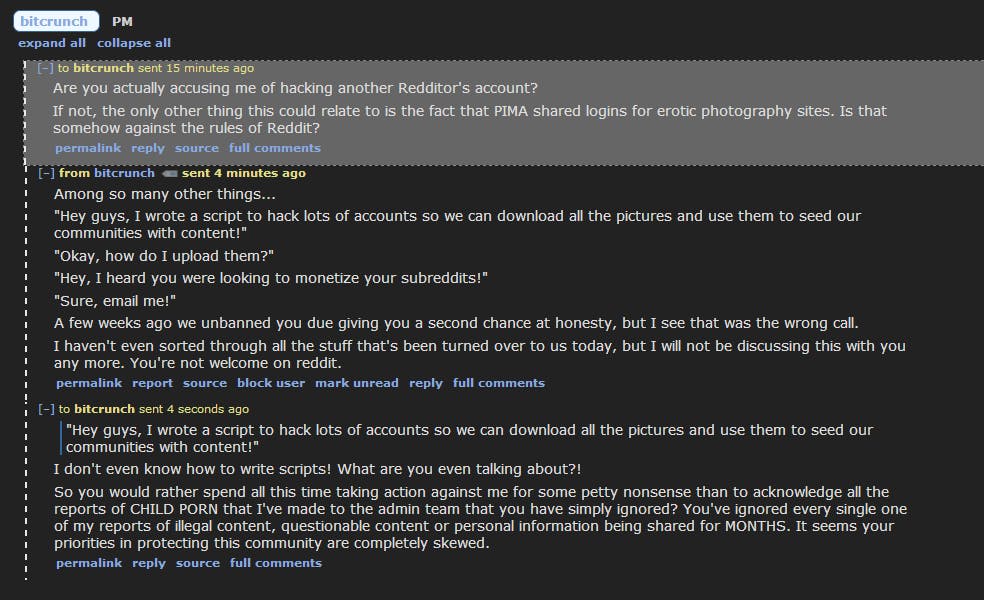 Which brings us to Wednesday, when Gossage announced that there were multiple subreddits without moderators and that because of the events that transpired, they would be more discriminate with who they picked.

For his part, Scopolamina maintains that, save for the vote cheating, he never broke the rules. To back up his claims, he cites various conversations with the moderators of r/reportthespammers, including this one. He also discussed the spam issue with Roger Ostrander, Reddit programmer and administrator, months before his initial ban.

“I was such a prolific reporter of spam that the RTS mods gave me special flair in the r/reportthespammers subreddit,” he told me (flair is a tag moderators can append next to you user’s name to make them stand out). “You have to be a VERY prolific reporter who makes accurate reports before they will give you any flair.”

In his eyes, his permanent ban is a step in the wrong direction for the site.

“This isn’t an ego thing,” Scopolamina insisted. “It’s a simple fact that they’ve banned a moderator who has done more than (almost) anyone else to eliminate spam and crack down on bad actors all over Reddit. It was a thankless job which is now vacant and no one is rushing to fill that gap.”

Reddit did not respond to requests for comment, which makes it harder to provide both sides of the situation. All of the images above have been provided by Scopolamina, who had previously told me that he screengrabbed every conversation he ever had because he knew that he would eventually be banned from the site.

That said, what happened to Scopolamina—and other deposed influential moderators—perfectly highlights how little, if any, agency redditors have on the site. Once banned, redditors have little recourse beyond appealing directly to administrators, the people who banned them in the first place.