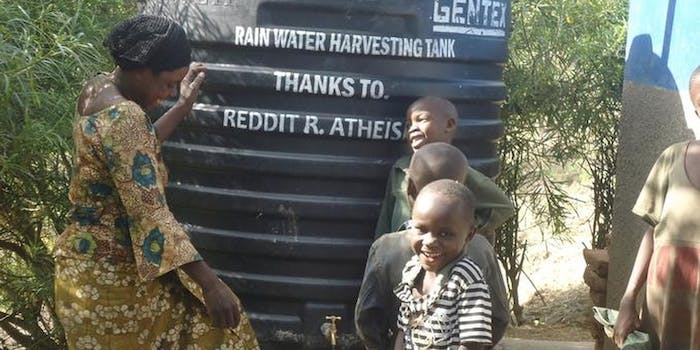 Still putting their stamp on things.

Reddit‘s atheist community, once described by Vice as “the most annoying demographic on the Internet,” has been through a lot in recent years. In 2013, it lost its status as one of the default forums seen by every user on the site, and while the stereotype of the “Reddit atheist” remains, the forum isn’t what it used to be.

But sometimes r/atheism tries to rise above that tarnished image—like when they bring clean water to a school in Uganda. Reddit atheists raised funds and purchased a rainwater tank for Mother Giver Nursery School, located in the Rwenzori Mountains in Western Uganda.

“The water tank will greatly aid the health of the children and the entire community of Buhanga. At the present time, many of the children are often sick, with diarrhea, because they drink impure water, due to thirst and the problem of there being no fresh running water in Buhanga,” reported the Brighter Brains Institute, the secular humanist charity through which the redditors donated. “The new water tank will be filled with fresh, safe rainwater caught from local roofs, and the health of the villagers will improve.”

Unselfish acts of charity like this should go a long way toward dispelling the notion of Reddit atheists as “folks who have, ironically, adopted the attitudes of hardcore evangelicals who try to convert strangers on subway platforms,” as Luke Winkie put it in Vice years ago.

Or it would, but there’s a catch: Photos of the rain tank are now online. Smiling children pose with their new, potentially life-saving barrel, which bears the collective pseudonym of the folks who donated: “Thanks to Reddit R. Atheism.” 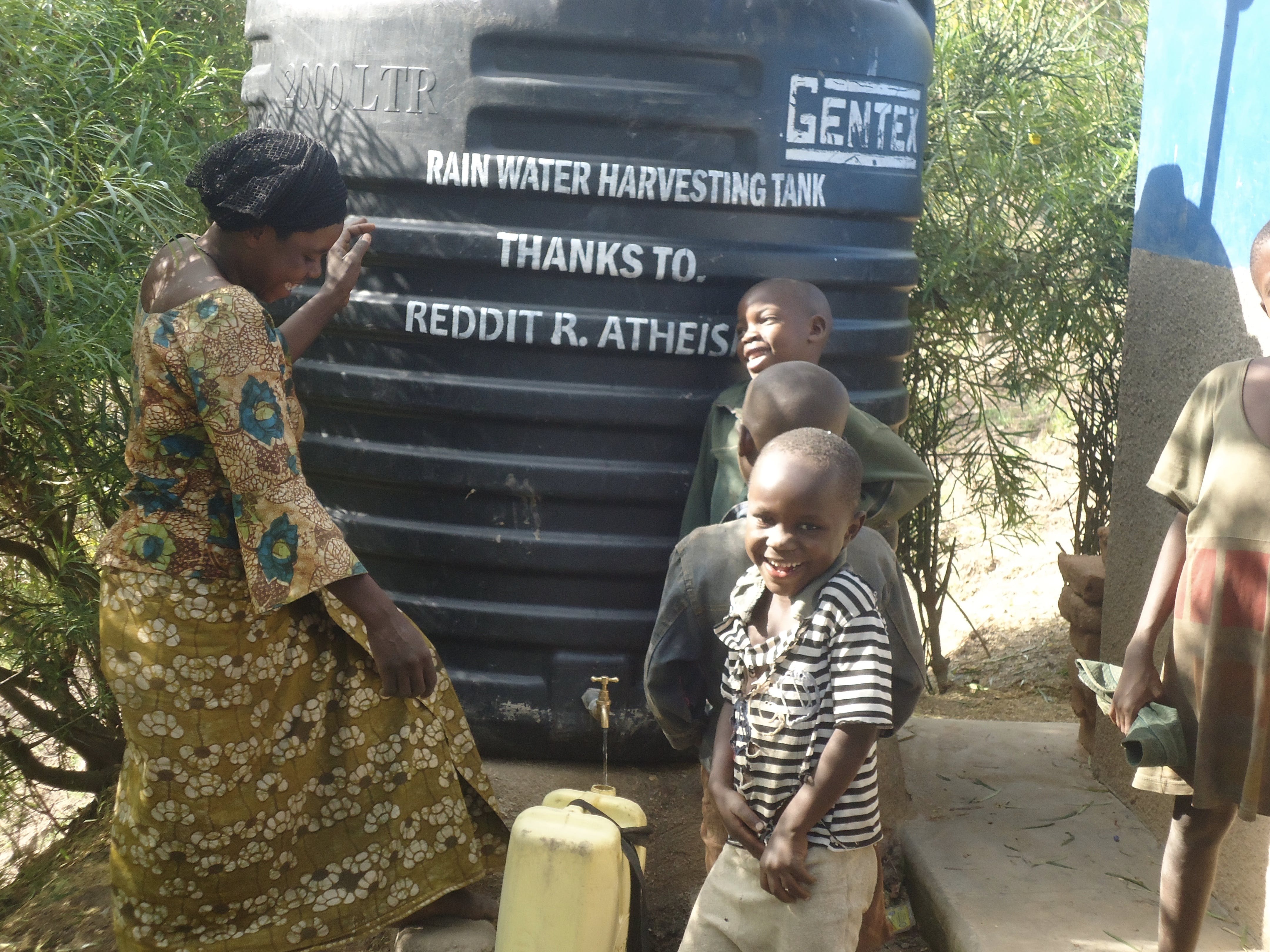 The semiotics of a rainwater tank with “Reddit R. Atheism” are extremely complicated, but there’s been a communal attempt to break them down in an r/atheism thread.

One of the common knocks against atheists is that, without religion to provide guidance, they lack ethical direction. That’s pretty silly, but some atheists are sensitive about it anyway, and never more sensitive than when discussing their charitable acts.

“Not saying it doesn’t happen from those of religious backgrounds, but I’ve noticed it’s exceedingly rare—It’s awesome to be able to do these things for people without any strings attached. No special ‘worship this’ message and no ‘you should thank god’ message either,” one self-described “strong atheist” poster wrote.

“And we didn’t do it to gather brownie points with our bestest supernatural buddy either,” someone else chimed in.

Wonderful, noble people, certainly. But soon, critics stepped in to disparage them. (I know! I can hardly imagine, either.)

“The funny thing is if it was marked with a religious affiliation, you all would be the first to bitch about it,” wrote fakeaccountofcourse.

The Reddit atheists took umbrage. The first and most popular response was, “Religious people and atheists can do all the good they like as long as they don’t expect the people they’re helping to adopt their world view.”

A good point, and one that most everyone could accept. Interestingly enough, though, Brighter Brains confirms that “Mother Givers School has agreed to the Humanist Principles that are promoted by BiZoHa, the ‘world’s first atheist orphanage’ and by three other humanist/atheist/secular schools that exist in Uganda.”

But if you can ignore that, the fact remains that the kids still got the water they needed, right? Why does the motivation behind the good deed matter?  Someone raised this point in the thread.

“I think the ‘why’ only matters when it makes the deed less effective. For example, there are a lot of ways a charity can waste money on giving the donors warm fuzzies (like sending you handwritten letters ‘from the children you helped’). If you’re only donating to charity because you want warm fuzzies, maybe you prioritize charities like that over charities that do better work.
But that only comes into play while you’re choosing the deed. Once the deed is done, I think it stands on its own.”

Well put, well put. If the deed stands on its own, though, then why is doing it for Reddit R. Atheism any better than doing it for a religion?

Let’s give the last word to quicksandyaheard, who wrote, “I think this is awesome. Water is fucking water. I just see the circlejerk around the fact that ‘it’s not bibles’ is rather unproductive.”

Would it be awkward to say “amen” to that?

Anyway, this is a huge leap forward in the Reddit atheists’ ongoing struggle to shed a profile that Vice writer Roisin Kiberd called “a negative internet cliché… the rabid Richard Dawkins supporter, the mansplainer, the hat-wearer fond of paradoxically holier-than-thou circlejerks.”

“In addition to this rainwater tank, we also raised money to pipe in water from up the mountain. That work is underway,” wrote Aprilmist, “Lives have been changed in a very positive way, thanks to atheists!

Years ago, r/atheism came together to write “once upon a time” at the beginning of Bibles. It’s nice to see they’ve moved on to providing clean water for those in need, even if the presentation is still insufferable.