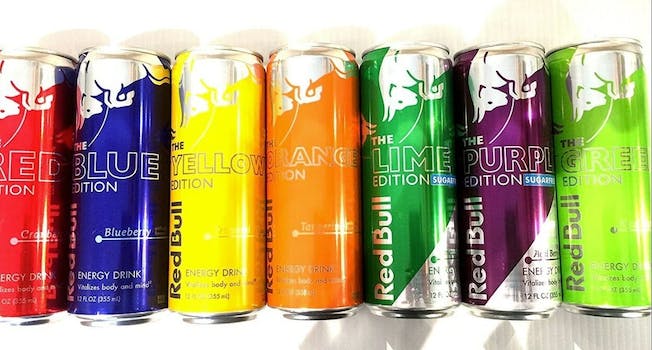 The energy drink brand has dropped a limited-edition flavor during each of the past three summers, starting with 2014’s Yellow Edition. I argued in other publications, including on the website Twitter.com and on an experimental Gawker side-blog that no one read, that Yellow Edition was superior to all other available flavors of Red Bull and should be a permanent addition to the lineup. The abominable Silver Edition (advertised flavor: lime; actual flavor: a handful of unwashed pennies) should be retired.

And lo, these very good recommendations came to pass, followed by the entry of two other totally acceptable Summer Editions—Green and Orange—into the permanent Red Bull canon. This year has brought an even bigger shakeup for Red Bull heads, with three new flavors (one Summer and two sugar-free) to evaluate.

We’ll get to that in a minute. First: why Red Bull? Am I some kind of shill for Big Taurine? No. As previously mentioned, Red Bull occasionally releases cans of burning metallic garbage that deserve no space on store shelves. But when it’s good, it’s good.

Red Bull can’t touch coffee as the world’s greatest caffeine-delivery mechanism, but its weird lore has given it a special place in the public imagination. A recent study found that people who drank a cocktail of Red Bull and vodka experienced a placebo effect, acting significantly more wasted than they really were—”they feel like they’re more intoxicated simply because the marketing says they should feel that way.” People really buy that “it gives you wings” stuff, whether they realize it or not.

My favorite anecdote about Red Bull comes from writer and Magic: the Gathering player Mike Flores. He claims that a friend working at DARPA told him that Red Bull’s featured ingredient, taurine, appears in the U.S. government’s secret book on “how to make Iron Man.”

“We don’t know what it does,” the friend allegedly said, “But we know it does something.”

To get the something, though, you have to drink it. And some forms of Red Bull are better than others. Let’s rank them now.

Red Bull Cola was subtle and not too sweet, which made it a tough sell in the U.S. You can still get it, but you’ll have to special-order it from Austria, the only country where it’s still made. An incident in 2009, where Red Bull GMBH was forced to prove its use of coca leaves was safe, only raises this drink’s stock in my opinion.

I’ll reiterate here what I wrote when this came out three years ago: “It’s like Red Bull was running low on dumpster flavoring for its usual pineapple-dumpster Arnold Palmer and decided, ‘fuck it, let’s go with just pineapple for a few months.’ And it was good.”

Generally speaking, Red Bull’s citrus flavors do the best job of coating its various chemical ingredients in something palatable. The tangerine-flavored entry, although it’s still almost intolerably sweet, is one of the best of these, because it tastes the most like something actually found in nature. If you don’t like pineapple, this may be for you.

The latest Summer Edition is Red Bull’s attempt at one of the fruit-punchy flavors that competitors like Rockstar and Monster have thrived on for years. Because they decided to cling to some suggestion of a specific fruit, though, it doesn’t have the pure Kool-Aid flavor of a Rockstar Punched. That’s probably a good thing. Excited to see this re-released later in the year as Magenta Edition.

Update: It wasn’t. R.I.P. to this extremely good flavor.

One of the earliest Editions, and still one of the best. Blueberry is an unusual flavor for a soft drink, and it tastes like it was chosen because it clashes the least with Red Bull’s original metal-pineapple flavor. Later Editions would do more to cover up that tang, but this one is still perfectly passable.

It’s supposed to be kiwi apple, but it tastes like apple-apple. This is fine.

Everyone was putting Red Bull in their cranberry vodkas anyway, so Red Bull saved you a step. Consumed straight-up, it’s middling, but I’d rank it higher if we were rating Red Bulls as mixers.

Red Bull’s Summer Edition for 2018 is Coconut Berry, which comes in a white can.  It can’t decide whether it wants to be coconut or berry, and ends up somewhere around “blue raspberry Airheads candy.” Cocoberry isn’t bad, but it’s an annoying reminder that 2017’s much better Grapefruit Twist didn’t stick around as a permanent flavor. Red Bull only has so much shelf real estate to work with, I guess.

These didn’t last long before they were bumped out of the way by a real, full-sugar, Orange Edition. The orange version seemed like a proof-of-concept for the current tangerine flavor, but the cherry was too weird to make the jump.

New for 2017, this is Red Bull’s years-late entry into the 2015 açai craze. It’s generically fruity and just okay.

Although Red Bull seems to have learned from the cautionary tale of the Silver Edition, lime is still not in its wheelhouse. Something about the acidic flavor of lime combined with the already acidic flavor of Red Bull gives this all the charm of a daiquiri made from gastric juices.

This is not actually good. Its closest natural analog is probably pineapple, but it really does its best to remind you that you’re drinking a lab-synthesized version of something found in bull semen. There’s a reason they started making so many other flavors.

Similarly not good, but even more artificial.

Just suck up the 10 calories from the sugar-free stuff. Red Bull Zero is rough.

Thankfully, this has been discontinued in the U.S., saving consumers from accidentally drinking something with the surprising metallic tang of liquid bullets. I still can’t get over how bad it tasted.

And that’s all of them. That’s all the Red Bulls. You may disagree with this ranking, but I assure you that it is 100 percent correct. All complaints may be filed to the landfill, where they will presumably live alongside hundred of unsold cases of Silver Edition.