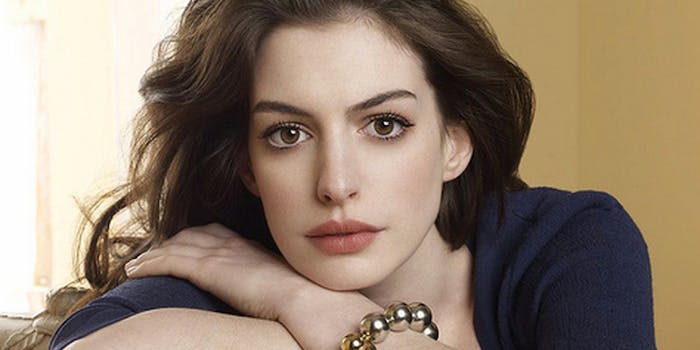 Quora answers, “Why do so many people hate Anne Hathaway?”

Is it her pixie haircut or her smug personality? Quora tries to explain all the hatred for the Oscar-winning actress.

State the name “Anne Hathaway” and it might trigger a response that’s illegal in all fifty states. But why? Why does the actress’s name invoke so much rage for what little harm she has done?

“Hathaway is the subject of more vituperative, angry scrutiny than perhaps any actress working today,” writes Salon in a must-read piece speculating on why Hathahaters exist.

Perhaps we find her theatre kid persona too excruciating to stomach, or maybe it’s her seemingly artificial smile that radiates from her goofy-looking mouth. Another reason? Her angular and bony face, which a psychology professor told Salon that people can’t relate to because it reminds them of more challenging times. In a recession, he says, we want our actresses to have rounder features.

But still, we’re left an unsatisfying answer as to why the Les Miserables actress conjures up a collective nauseous feeling. Leave it to the Mensa-wannabe hivemind over on Quora to tackle the question.

In the site’s Anne Hathaway section (sure), the question “Why do so many people hate Anne Hathaway” has racked up 40,000 views and attracted the varied and serious responses that this question absolutely deserves: Why do we let this pixie-cropped terrorist walk amongst us?

Michael Wolfe, a so-called startup founder, has one of the most-read answers. He writes that compared to Reese Witherspoon, Hathaway comes across as self-absorbed, affected, phony, and brittle. (That intel was collected from a post-Oscar party he once attended, further proving that the nerds have all the fun.)

“I was at an Oscar party last night, and due to the venom in the room, I can confirm that Anne rubs many women the wrong way and many men, too,” wrote Wolfe.

In another very specific answer, a user named Mark Rogowsky (also some mystical-sounding social entrepreneur), said it’s not her looks or decent acting skills that make her hard to like. He narrowed it down to her annoying personality.

He pointed to a friend’s posting on Facebook, anticipating an aggregating and vapid speech from Hathaway at this year’s Oscar awards, that he felt she delivered on. Hathaway’s line of “I look up to you all so much,” a nod to her competitors, truly pissed off Rogowsky.

“If she looks up to a character actress who basically hadn’t worked for a decade until recently earning some small roles (and having a great turn in Silver Linings Playbook), Hathaway failed to convince me that sentiment was even slightly genuine,” he wrote.

And compared to Internet fave Jennifer Lawrence, who comes off as humble and personable, Hathaway doesn’t have a fighting chance to be liked by anyone except maybe by her inanimate Oscar statuette.

“It’s some combination of utter fakeness combined with a belief that she’s no more ‘all that’ than a lot of other people (and maybe she’s a bit less, actually, despite the talent),” he wrote. “And every time she opens her mouth outside of a movie screen, her words or manner seems to enhance that belief.”

Maybe Hathaway will have a more welcoming experience on Yahoo! Answers?