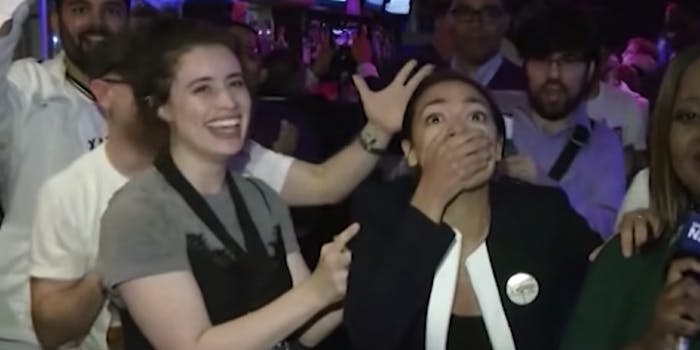 If you’ve been on Twitter the last week, you may have noticed people talking about “praxis.”

i hate smart people. what the fuck is a "praxis"? bitch i'll kill you

who is praxis… what did he do…

The memes stem from a viral video by New York comedian and former Rep. Alexandria Ocasio-Cortez (D-N.Y.) campaign staffer Simone Norman. Praxis, a term closely tied to Marxist and socialist ideologies, relates to the direct actions individuals can take as opposed to only discussing theory. Basically, it’s about how actions can speak louder than words.

In the video, Norman plays the persona of a bohemian layabout speaking with an extreme amount of vocal fry and a disaffected demeanor. “Karl Marx? My daddy,” Norman jokes. “I look so fucking skinny today, that’s praxis.”

Now praxis discourse is inundating Twitter, and Norman has becoming known as “Praxis Girl.” How did we get here? Believe it or not, this whole ordeal got kicked off by New York comedy festival Skankfest recently hosting a set by Louis C.K.

Immediately following this development, many other New York comedians shared their opinions on the festival allowing C.K. to perform after his history of sexual misconduct.

Comedian Kath Barbadoro wrote in a tweet, “If you put Louis CK on your comedy stage I can’t trust that you have my best interests at heart. This is a workplace safety issue and I don’t want to work for someone who does not value my safety.”

Comedy is a place where self-loathing, mentally ill people with social anxiety and sexual issues congregate because they’re too dysfunctional to hold down a real job, stop trying to turn it into a “workplace” you neoliberal dweebs!

Then the two had an indirect feud through tweets where Barbadoro called into question the merit of Khachiyan’s podcast and career.

Really don’t give a shit what any non comics think about what goes on in my work place tbh. Doing vocal fry at a bunch of coked out nihilists at the bell house every couple months doesn’t make you a part of my industry

Comedian Jake Flores, who had his home raided by homeland security, after making a joke about murdering ICE agents in May 2018, proceeded to publicly criticize Red Scare as well. The podcast has often times become a lightning rod for controversy due to its host’s glib use of the R-slur and espousing takes that some would construe as problematic. Episode titles include “Step in the Name of Jihad,” “Rape Jokes w/ Vanessa Place,” and “Is Mussolini Obsolete.” Nonetheless, the show accrues over $13,000 monthly on Patreon.

Its not a comedy podcast its cultural critique and its not our fault we’re funnier than you, allegedly a comedian

The general tone of the podcast can be summed up in the following dramatization by a fan.

ANNA: Netanyahu can occupy this pussy
DASHA: I wonder if hes a Virgo?

ME: These girls are dangerous…

With the many feuds about the validity of its “schtick” ongoing, the floodgates opened for further lambasting of Red Scare on Twitter. And now, finally, we’ve circled back to Simone Norman. What seems like a jab at the general demographic of “hot mean girls [who] become public leftists,” reveals itself to be a pointed dig directly at Nekrasova and Khachiyan if you’re willing to circumvent this absolute rabbit hole of Twitter drama.

I’m glad there’s a podcast made by women that gets everyone mad now. That’s feminism

So how do the ladies of Red Scare feel about Norman and her parody of their show? Well, they have mostly adopted the position of ‘imitation is the sincerest form of flattery.’ Indeed, Nekrasova and Khachiyan’s reaction to ‘Praxis Girl’ has matched the public persona that they have cultivated for themselves and their show. By just commenting positively on Norman’s appearance, Red Scare has perfectly personified the lackadaisical, disaffected image they’ve ironically worked so hard to establish.

Now, Norman contends with a problem that actually exists in 2019: the possibility of achieving some semblance of fame for being a meme.

If I get verified for being the fuckin Praxis Girl will that mean I have beat the system? Or that I should delete my account? Perhaps both