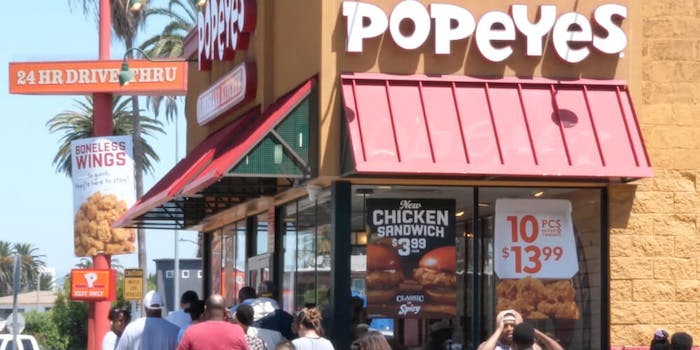 A fight broke out among staff over the revelation.

Less than a week after it restocked its famous chicken sandwich, Popeyes has already seen the destruction of a car, a man screaming the N-word, numerous fights, and even a death. Now, an employee selling sandwiches as a side hustle can be added to that list.

TMZ got its hands on a video that shows Popeyes employees fighting behind the counter of one of its Los Angeles, California locations. Screaming can be heard in the video, as someone yells, “You fucking hit me, bitch!”

A source told TMZ that the incident started after one employee was caught selling the chicken sandwiches on the side. Multiple employees came together to fight the employee in question.

This happened not even a week after the fatal stabbing at a Popeyes in Maryland, an incident a Popeyes spokesperson described as a “tragedy.”

“We are saddened to hear about this senseless act of violence,” the spokesperson said in a press statement. “We, along with the franchisee, are fully cooperating with local authorities and actively working to gather more information.”

Of course, people have been talking about how great the sandwich is, or Justin Bieber who tried out the sandwich, and deemed it was “not worth the hype” on Instagram.

Despite all the madness it has caused, TMZ reports that Popeyes will not be removing the chicken sandwich from the menu.