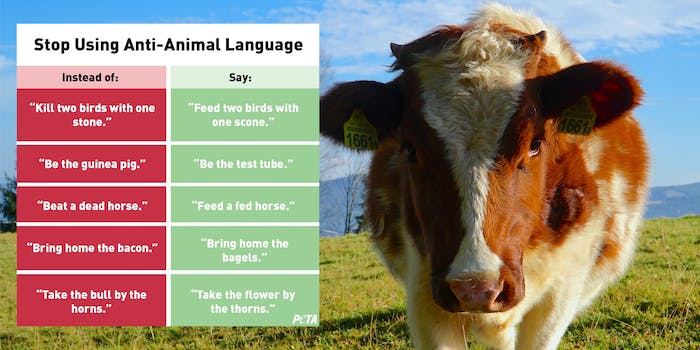 'Feed two birds with one scone.'

People for the Ethical Treatment of Animals, or PETA, is known for its viral marketing stunts to get people thinking about animal cruelty and our consumption of animal products. The organization’s intent is good, especially since eating meat is directly linked to climate change. But, more often than not, PETA’s execution of getting this information to the public falls flat and prompts ridicule. The latest example is an “anti-animal language” chart that PETA included in a tweet late Tuesday.

The chart asks people to stop using idioms like “kill two birds with one stone” because, as the organization says in the tweet, “words matter” and an expression about killing birds apparently affects how people view animals. Instead, PETA says, we should say “feed two birds with one scone.” No, really. Check out the full chart below, which also includes the expression “bring home the bagels”:

Words matter, and as our understanding of social justice evolves, our language evolves along with it. Here’s how to remove speciesism from your daily conversations. pic.twitter.com/o67EbBA7H4

Of course, people made fun of this chart. Maybe PETA already knew people would find these expressions absurd and ridiculous, thus attracting more attention to the organization.

Metaphor. A figure of speech in which a term or phrase is applied to something to which it is not literally applicable. #WordsMatterhttps://t.co/kpNls5H0kx https://t.co/rxQatAy1a9

But, for people who are vegetarian (like me), the tweet was just another frustrating incident. PETA, it seems, is intent on making vegetarianism and veganism uncool. And every time the organization tweets something like this, or shares a dumb ad of like a cow in bed with a couple, vegetarians are left to answer for it.

please spare a thought for all chill vegans today who will have to talk about this shit for the next year. https://t.co/iMe7PaRqre

PETA’s follow-up tweet was worse. It read: “Just as it became unacceptable to use racist, homophobic, or ableist language, phrases that trivialize cruelty to animals will vanish as more people begin to appreciate animals for who they are and start ‘bringing home the bagels’ instead of the bacon.” While “bringing home the bagels” is a phrase most people would love to hear, it’s quite a stretch to compare racist and homophobic language with dumb idioms. The Root called it “whitest, dumbest, most clueless and socially irresponsible tweet ever.”

Just as it became unacceptable to use racist, homophobic, or ableist language, phrases that trivialize cruelty to animals will vanish as more people begin to appreciate animals for who they are and start ‘bringing home the bagels’ instead of the bacon.

PETA got what it wanted: Everyone is talking about the chart on Twitter today. But did it convince anyone to stop eating meat, or even eat less meat? Yeah, probably not.