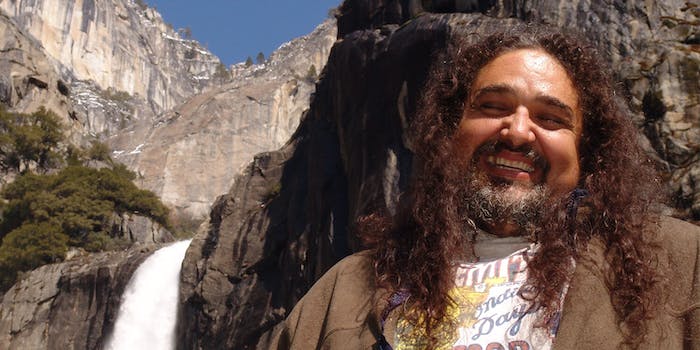 He had been posting about his health issues on Facebook for days.

Paul Vasquez, the man whose video of his own awe at seeing a double rainbow in the sky turned him into one of YouTube’s early viral stars, is dead. He was 57.

According to The Modesto Bee, Vasquez died at the John C. Fremont Hospital in Mariposa, California Saturday afternoon. Vasquez had posted updates about health issues to his Facebook followers over the past several days—which included fever and shortness of breath—and an unwillingness to go to a hospital; he later scheduled an appointment to be tested for COVID-19.

“Getting tested for Covid 19,” he wrote on his Facebook page on May 5. “I’ll get my results in two days, however at this point I’m fairly certain that I don’t have it. I didn’t have a fever. Something else is going on with me. I’ll update later on.”

In response to a poster’s comment, Vasquez later said that he didn’t have COVID-19.

“[I]t’s a long story that ends with me not having Coronavirus but a ticking bomb in my chest that could go off at any moment,” he wrote a few days later, clarifying that it didn’t have to do with his heart.

Vasquez lived a long life before he went viral that included a career as a firefighter, working at the National Park Service, and a short stint as a professional cage fighter. He was divorced but has two adult children from a previous marriage.

After Vasquez’s 2010 double rainbow video went viral, he started appearing on talk shows like Jimmy Kimmel Live and did a commercial for SmartWater. Vasquez is so ubiquitous with double rainbows that his video is cited whenever more than one rainbow is spotted in the sky.

But as much as Vasquez became known for his YouTube videos, he always had a more down-to-earth view of his own internet virality.

“A lot of people in the beginning were like, ‘Enjoy your 15 minutes of fame,’ and I knew it wasn’t that. … This was something bigger,” Vasquez told the Daily Dot in 2016. “The whole thing was so I could give a message to humanity. None of it’s about me.”