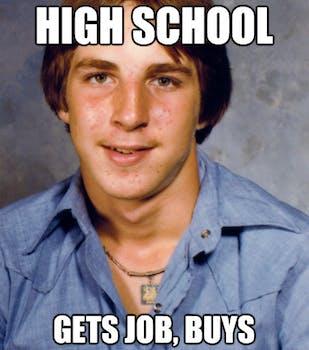 Most memes are fun diversions, something to share a laugh over until the next anthropomorphized cat shows up on your Facebook wall. But occasionally, a meme taps into something more universal, playing on the shared emotions or anxieties of a group of people.

And so it is with “Old Economy Steven,” an image macro posted to reddit’s AdviceAnimals board yesterday. The meme depicts a young man from the late 70’s or early 80’s who doesn’t understand why it’s so hard for people entering the workforce in the 21st century to find a good job, buy a house, start a family, and retire with a pension like he did. After all, Old Economy Steven types with one finger and still makes six figures. He also paid his own way through college (of course tuition was only $400 a semester back then), and when he graduated, Steven had no problem finding an entry level job with zero work experience. No wonder he thinks young unemployed college graduates are such “slackers.”

Now, every generation faces unique challenges. For example, there are far fewer obstacles for women and minorities in the workplace today than there were thirty years ago. But “Old Economy Steven” definitely speaks to the perception that elders don’t always understand what their children are facing when they enter the workforce. A redditor named KungFuSnoopy recounted one such story:

“I had a friend in the private liberal arts college I went to who, when he turned 20, was cut off suddenly because his father felt that since he had worked his way through college thirty years earlier, his son should do the same.
The problem was that my friend was still listed as a dependent under his parents (so they could get the tax write off), and therefore didn’t qualify for the financial aid he might have received. He got a job. He worked. He went to school. Lasted about half that semester before he dropped out. Too bad, though, because he was a nice guy and a really good student.”

Of course, not everyone thinks the generational divide is as clearcut as this meme implies, as RedAnarchist points out:

“I’m not sure this meme is really worth idolizing in any way. I can assure you that even decades ago, the vast majority of kids who failed out of high school did not end up too well in life.”

Certainly the macro is a commentary more on the current mood, not an accurate portrayal of history—unemployment reached 9.7 percent in 1982 (about what it was in 2010).

The most educated members of any generation are not guaranteed financial stability, said daTScientisT:

“The hell are you talking about? People have parents who failed out of high school and have enough money to retire? My parents both have PhDs and aren’t close to having enough for retirement.”

As the meme continued to be remixed and reposted throughout the day, its meaning expanded to include commentary on how the political views of older generations don’t always jibe with their personal experiences. One macro features the text, “‘Had a great union job. ‘Unions are ruining the country.’” Another reads, “Takes farm subsidies. Hates all these goddamn taxes.”

While “Old Economy Steven” is obviously based on some pretty vast generalizations and perceptions, it nevertheless strikes a chord among young workers who are sick of being called lazy or stupid just because they haven’t achieved as much as their parents had at the same stage. That said, young people shouldn’t assume their parents always had it easier. Perhaps thinkintoomuch put it best:

“Moral of the story: Don’t take too much blame or too much pride depending on your job/income. A great part of economic success is luck.”