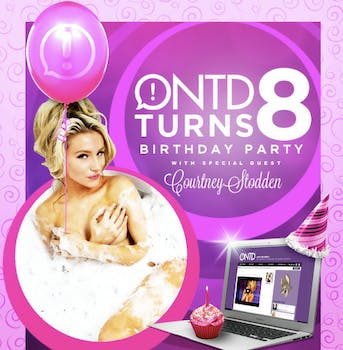 The massively popular LiveJournal blog is turning 8 in style.

How many blogs get so big, celebrities attend their birthday parties?

There’s only one such blog we know of: Oh No They Didn’t!, LiveJournal’s largest community.

On Tuesday night, the celebrity blog celebrates its eighth birthday with a virtual party. According to ONTD moderator Brenden Delzer, this will be a first for the community, which boasts 100,000 members.

“ONTD hasn’t really done anything to celebrate its birthday in the past, of this magnitude, anyway,” he told the Daily Dot. “This is our first party!”

The online party will take place at Shaker, a Facebook chat plugin with a nightclub vibe. Celebrity guest Courtney Stodden will be in virtual attendance to answer questions from community members. Stodden, a teenage bride infamous for her skimpy outfits and attention-seeking camera mugging, is the subject of much gossip on the blog.

“I reached out to Courtney’s team about it and they were very positive about the concept. Courtney is kind of a recent ONTD phenomenon, so I wanted to bring in someone special to really get people excited about ONTD’s birthday.”

It’s fitting for the blog to have a guest almost as famous as itself. Over the years, ONTD has established itself as a gossip blog on par with Perez Hilton for nabbing its fair share of exclusives and awards.

Delzer, who has been an ONTD moderator for six of the blog’s eight years, was hired full time by LiveJournal after ONTD’s traffic repeatedly crashed the network servers in the aftermath of reporting Michael Jackson’s death in 2009.

“I never expected ONTD to get this big, but we have a great community of passionate people that have carried ONTD through the years,” Delzer said. “It’s really the members and the environment they create that has put ONTD on the map over the past eight years.”

Now it’s time to pick out an outfit.