Did this Facebook user really not get that Obamacare = Affordable Care Act?

Why would someone celebrate the possible repeal of Obamacare when they depend on it for their insurance? There may be valid reasons, but this argument is certainly not one of them: “I’m not on Obamacare, I’m on the Affordable Care Act. I’ll be fine.” Those are two names for the same legislation, but don’t try to tell it to this anonymous Facebook user who’s going viral this week.

Facebook nitwit celebrating Obamacare repeal finds out Obamacare is another name for the ACA he depends on. pic.twitter.com/ehStqChXqq

Helen Kennedy, formerly of the New York Daily News and the Boston Herald, tweeted a screengrab of the poor, uninformed man getting roasted by his friends for celebrating the potential repeal of a program he himself uses.

“One step closer to fixing this mistake,” he tweeted, with a link to an article about last week’s Senate budget vote that took the first step toward an ACA repeal. “Only a couple weeks left of Barry’s regime. 2017 is already looking up.”

When a friend jumped in to attack Republicans and defend the Affordable Care Act, the original posted snapped back, “Jesus, where to start? First, we’re talking about Obamacare, not the ACA. Secondly, my health insurance is through the ACA, so I’m definitely not the kind of person to look down on others for needing help.”

His friends seemingly could not believe it, and tried to show him the error he’d made.

“Wait, if you’re on Obamacare, why the fuck are you celebrating the outcome of this vote?” one of them wrote. “If the Republicans get what they want, you’ll lose your insurance.”

But the stubborn dude simply would not give up.

“I’m not on Obamacare. My health insurance is through the ACA (Affordable Care Act), which was what they had to come up with after Obamacare crashed and burned as bad as it did. So I’m gonna be fine.”

That’s when his Facebook friends completely lost it, and told him in no uncertain terms that they’re the same thing. 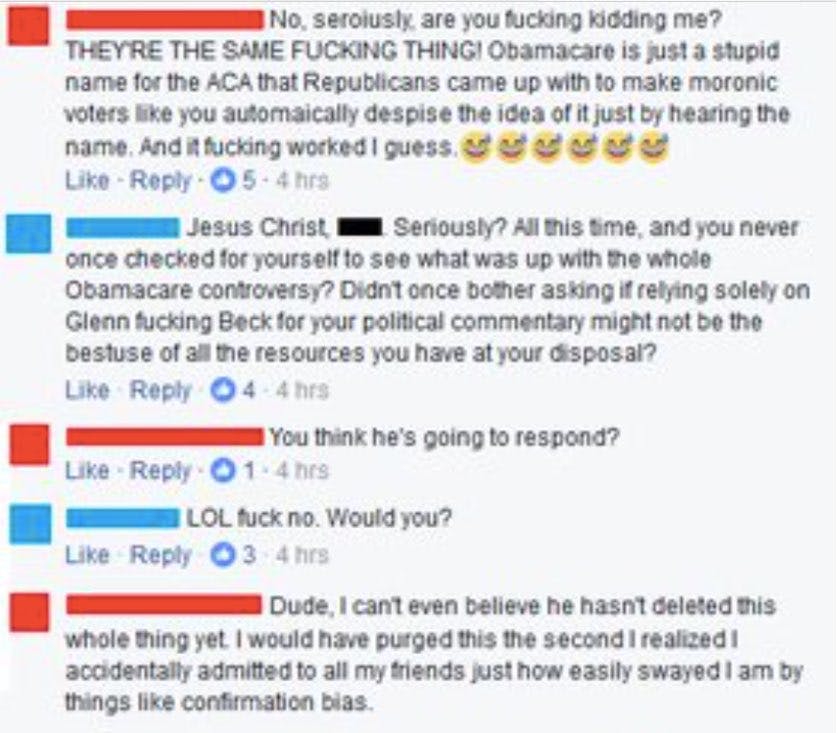 The post is going crazy viral, with tens of thousands of retweets and coverage on various internet news sites, and people are naturally making fun of it.

There’s some speculation that it could be fake, given how easy bogus Facebook conversations are to mock up, and how “fake news” looms large in the public discourse right now. No one seems to have found the original Facebook post, but perhaps it was private—or deleted out of embarrassment.

But if it’s real, it’s both hilarious and sad.

It’s troubling to think that this man is certainly not alone. Who knows how many people don’t realize they’re on Obamacare, and are rooting for it to fail because Republicans put the outgoing president’s name on it?

President-elect Donald Trump, in his long-awaited press conference Wednesday, was vague about his plans for an Obamacare replacement.

“It’ll be repeal and replace. It will be essentially, simultaneously. It will be various segments, you understand, but will most likely be on the same day or the same week, but probably, the same day, could be the same hour,” he said.

At least one Facebook user is really hoping that Trump keeps his word.