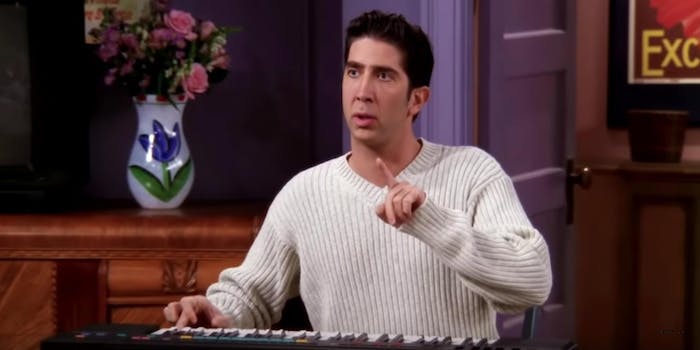 Prepare to have your mind blown.

Whether you realized it or not, Hollywood actor Nicolas Cage and Friends star David Schwimmer look uncannily similar, and this latest deepfake is definitive proof.

Deepfakes, videos in which one individual’s face is placed onto another’s using artificial intelligence and machine learning, have repeatedly made headlines for their dangerous potential. But one creator, known online as derpfakes, is more interested in harnessing the technology for the good of the internet’s obsession with Nicolas Cage.

In his latest mashup, derpfakes has placed the face of the Con Air star onto the entire cast of ’90s sitcom Friends, only to discover that the Ross Geller, played by Schwimmer, looks almost exactly the same. The internet noticed as well.

I am so upset. pic.twitter.com/Udt9pNEpgW

Derpfakes, who has been uploading such videos to his YouTube channel for the last year, further tested the Cage-Schwimmer theory on Tuesday. After reversing the order of the swap, it was discovered that Schwimmer likewise makes a convincing Cage.

Speaking with the Daily Dot, derpfakes revealed that the now-popular combination of Cage and Schwimmer was almost killed on the drawing board.

“I almost didn’t put that clip in (Schwimmer was the first of the Friends I swapped) because it seemed almost pointless as an exercise in face swapping,” derpfakes said. “But then of course the novelty of the similarity took over.”

The latest collection of Cage-inspired deepfakes follows many others from last year. Cage has appeared in place of countless other stars, including Marvel villain Thanos and Keanu Reeves’ character Neo from The Matrix.

Although the internet is rejoicing over the meme-worthy discovery, U.S. lawmakers are warning that deepfakes could allow foreign adversaries to interfere in the 2020 election.

The highly-convincing—and horrifying—deepfakes mashup of actors Steve Buscemi and Jennifer Lawrence increased the spotlight on the technology even further.

Derpfakes, like some other creators, understands the concerns, but argues that deepfakes are largely no different than other forms of media manipulation.

“It’s simply that video has until now been more or less outside of the realms of convincing alteration by the public,” derpfakes said. “I feel there’s even an argument to be made that it could even de-escalate the trend of fake news by showing people that neither video, photographs, voice nor even text is real by default.”