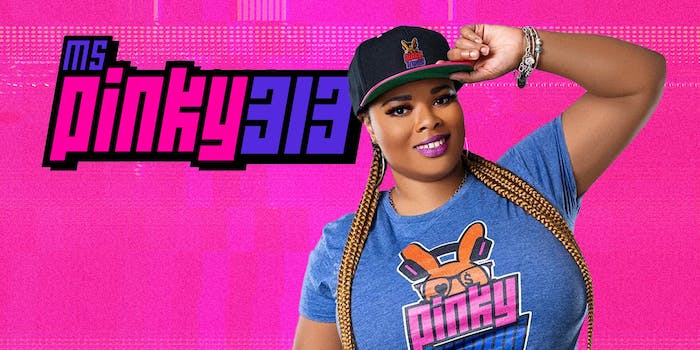 Streamer Ms. Pinky is paving the way for more Black women in gaming

'We’re all about winning, and that’s what makes us a sisterhood.'

For longtime gamer Austreah Garnes, creating content online is more than just a hobby, it is simply a way of life. Known in the gaming community by her alias “Ms. Pinky,” Garnes has amassed a strong following across various platforms including Twitch, TikTok, YouTube, and Facebook, which has helped to leverage her brand and expand her reach as a content creator.

A child of the ‘80s, Garnes’ introduction into the world of video games began in the early ‘90s with the arrival of the Super Nintendo Entertainment System, which featured one of her all-time favorite games, Super Mario World. It was through Super Mario World that she began to develop an imagination and longtime affinity for gaming.

This affinity would also ignite her creative side, and soon an interest in TV and radio production would develop into a career following her time at Specs Howard School of Media Arts, located outside of Detroit.

Intersecting passions for video games, creativity, and community led her to Twitch in 2015, where she began to connect with other gamers across the world. On Twitch, she was given the ability to stream and broadcast her favorite video games, which granted her creative expression. Aside from video games, she’d use the platform to broadcast cooking shows, podcasts, and crocheting. Soon enough, her work resulted in a growing audience.

This growth has resulted in several partnerships with brands like Pandora, H&M, and White Castle as well as charitable organizations such as Starlight Children’s Foundation and the F Cancer Foundation.

With this list of accomplishments, it would be easy for Garnes to rest on her laurels and be content with success. But as she continues to gain exposure, she is quick to affirm other content creators especially those that are underrepresented in the gaming space.

This discovery led Garnes to connect with Black women gamers, who are oftentimes cast aside and overlooked in the gaming community. She has made it a priority to stand in solidarity with this community by constantly celebrating their excellence on social media and making others aware of their existence.

She highlights communities like the “Noir Network” and “Black Girl Gamers” as two groups that she’s an active participant of, as well as “Brown Girl Gamer Code” and “Thumbstick Mafia” as additional spaces for Black female gamers.  She also noted the comradery among the groups and how they’ve banded together.

“What’s cool about these communities is that a lot of us are in the same circles and make an effort to help one another,” she said. “There are no crabs in the barrel when it comes to us. We also know how hard it is for us as Black women in the gaming space, especially when we’re coming into a White, cis-gender male dominant industry. It would benefit none of us if we were to hold information back and not share. We’re all about winning, and that’s what makes us a sisterhood.”

While she has a small team that helps with her branding assets, Garnes is essentially a one-person army when it comes to outreach. She understands the competitive nature of the industry and has taken initiative to elevate her work.  Citing her intuition and willingness to do research, she has used social media sites like Twitter and LinkedIn to connect with companies and pitch ideas which has resulted in brand partnerships. She also credits good relationships with other creators for granting her additional word of mouth opportunities.

Still, any business comes with highs and lows. This was perhaps most evident for Garnes in 2021, when her application to Twitch’s partnership program was denied. She believed her acceptance into the program was nothing short of certain after she was highlighted on the platform’s homepage for Black History Month.

But as one door closed, another opportunity emerged. Soon a brand partnership with Facebook would materialize upon her acceptance into its Black Gaming Creator Program, which equips gamers with resources and mentorship to expand their content. Other partnerships and collaborations would soon follow, including one with Knockout City, an interactive multiplayer dodgeball game produced by Electronic Arts.

While she is mainly known for her video game content, Garnes has also looked to other content creators for inspiration. Perhaps no influence has been greater than comedian Kevin Fredericks, better known as Kev On Stage, who has built a media empire thanks to his strong social media following and diversity of content. With aspirations to launch her own empire, she credits Kev On Stage for his example on Black creative ownership.

“Seeing how Kev On Stage has gone from working for other brands to creating his own streaming service and studio has been dope to see,” she said. “This gives me confidence that I can do it too. We’re around the same age and are both married with two kids. His wife is in business with him, and my husband is in business with me. There are so many similarities, but seeing his story lets me know I’m on the right path.”

Forever a champion of the Black women gaming community, Garnes remains steadfast in her commitment and support to this population of gamers as she aims to amplify their presence so that the next generation can prosper.

“Right now, I have a daughter that loves to play video games, so for her to grow up and see me as a Black woman and my content creator friends shine and do our thing, [it] lets her know that she can do it too,” Garnes said. “Growing up, I didn’t see a lot of Black women in the gaming space, and if there were Black women gamers, they were hidden from us. Because of this, I make sure that I’m loud and proud when I tell people I’m a gamer.”

Marquis Taylor is an educator, writer, podcast host, and a proud native of Detroit. He is the host, creator, and producer of Detroit Worldwide, an interview-driven podcast and platform that was created to celebrate and amplify Detroit's Black culture and history. A longtime arts and entertainment writer, his work has appeared in several publications including the Michigan Chronicle, Rolling Out Magazine, and the Minnesota Spokesman-Recorder. Connect with him on Twitter and Instagram @mtaylor313 and visit the official website for Detroit Worldwide: detroitworldwide.com to learn more about his work.