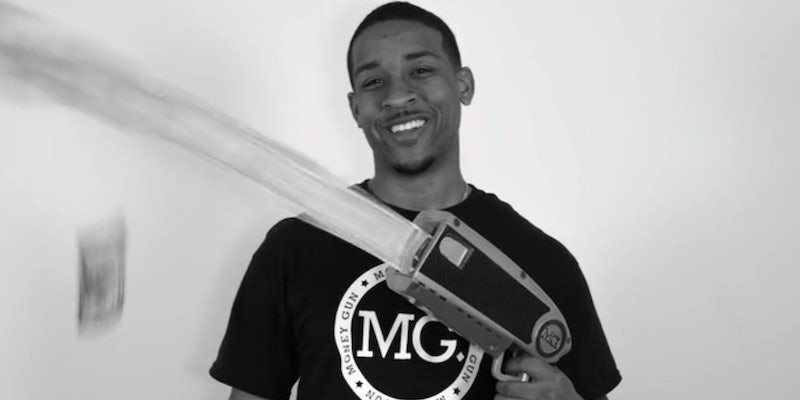 Pull the trigger and make it rain.

The Money Gun. It’s literally a gun that shoots money.

These days, the line between real and hoax Kickstarters can seem far too thin. This campaign to manufacture Money Guns is real enough, but its video looks dangerously close to a YouTube parody. Pay $250 (or $5,000 for the gold-plated version), for the opportunity to throw money at strangers!

Rather than being a satirical comment on crowdfunding, the Money Gun is actually marketed as a promotional tool for parties and events, kind of like a t-shirt cannon. Invented by entrepreneur Michael Schexnayder, it’s based on a toy gun and can be manufactured using 3D printing. It’s easy to imagine it being a good product for party planners and club promoters, but the Kickstarter’s $50,000 goal is a big ask.

Unfortunately, the thing most people probably want from a Money Gun Kickstarter is their own Money Gun, and the cheapest versions are $250 each. If they were already available in stores or online, they’d probably sell to frat houses and nightclubs. But on Kickstarter, where many customers are motivated partly by altruism, the Money Gun may be having problems finding an audience.

Still, if you have a burning desire to make it rain at your next birthday party, you still have four days to pre-order a Money Gun. It makes for a unique Christmas gift, to say the least.

Photo via The Money Gun/Kickstarter