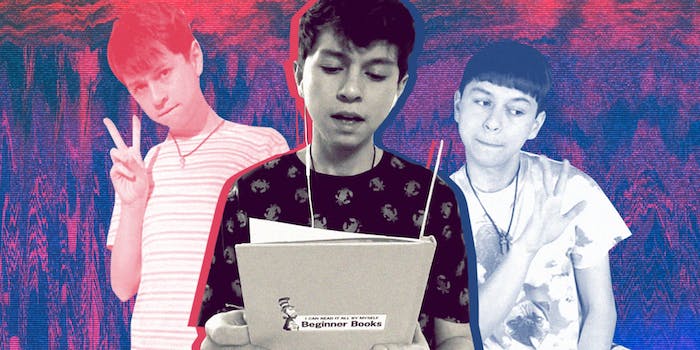 Mikey Angelo writes bars that will leave you speechless. The 23-year-old has a near-encyclopedic knowledge of contemporary pop and internet culture—in his words, he’s a “sponge to the culture”—and uses it to create raps that leave millions of TikTok users gobsmacked. For example: This reaction to one of his recent videos.

“Imma block ‘em when they come like an IUD—” Angelo rap starts.

“No,” a TikTok user cuts him off in a stitched video. “I literally had to stop it. It’s too early. I’m not even ready for the rest.”

Unfortunately, it appeared that the TikTok algorithm needed to stop Angelo as well, because hours after this video was uploaded in early July, his account, @mrgrandeofficial, was “permanently suspended.” No explanation given, no chance to appeal—it was just gone in an instant.

Angelo said that he’s been suspended from the platform before for unknown reasons, though he suspects that an early video of his put his account in poor standing. In one of his rap videos, he had a beer bottle in the background and TikTok kept taking the post down—Angelo presumes because he looks younger than his age.

Luckily, someone, somewhere helped him get his account back. Angelo doesn’t know who, and he didn’t receive an explanation for the ban. (TikTok did not respond to the Daily Dot’s request for comment about the situation.) He was just searching TikTok on a different account a few days later and found that his account was active again. Cheekily, he titled the YouTube upload of his TikTok rap, “this rap verse got me banned from TikTok..” But in reality, getting banned—and losing his 1.5 million TikTok followers overnight—was a scary experience.

“TikTok is a platform that I rely on as a job,” Angelo tells the Daily Dot over Zoom. “It’s scary to have to put all your eggs in that basket, and I think if this has taught me anything, maybe this was the universe telling me to look outside of TikTok and start seeing what I can do to branch outside [of it].”

Angelo already has a YouTube channel with 848,000 subscribers, which he started as an Ariana Grande stan account in 2016—hence the username—and has since evolved into an amalgamation of different musical videos reminiscent of the heyday of YouTube parodies and cover artists. The next step for Angelo is figuring out how to apply his online success to his dreams of becoming a songwriter and artist. He already has music out on Spotify, but he wants to grow.

“If I could be doing this for TikTok, and people enjoy it as much as they do and they get millions of views…  I could be doing this for music, for real,” Angelo says. “If I whip myself into shape and figure out what I need to do… I can release music and somehow translate these followers to Spotify and become the artist that I’ve dreamed of becoming my whole life. So I think it’s just stepping out of the influencer mode and becoming an artist, and I feel so ready to do it.”

Angelo spent years making videos singing and rapping how he imagined other artists and people would sound. He’s inspired by Nicki Minaj (he’s a Barb and calls her the pinkprint), Doja Cat, Ariana Grande, Mariah Carey, and Whitney Houston. His most popular YouTube video features him doing impressions of other artists and his signature video for a time was a simulated rap battle between celebrities. But now, he’s coming into his own.

Angelo’s parodies on YouTube have given him good writing practice for his original lyrics today. He also says his time on stan Twitter shaped his understanding of the cultural references that go into his work. Now, his music is near-exclusively written in the language of the internet—dealing in memes, influencers, viral videos, and trends—which serves him well on TikTok where every video of his is basically a guaranteed hit with Zoomers.

“I will picture the reaction to a line before I even say the line,” Angelo says of his writing process. “I will picture somebody gasping at their phone screen, and I’ll think, all right, what can I plug in? What words can I plug in to create this reaction out of somebody? And it just flows out of me in the most beautiful, organic, fun way.”

Most of his TikToks are set to instrumentals of popular songs like Doja Cat’s “Get Into It (Yuh)” or Destiny’s Child’s “Bills, Bills, Bills.” But for original songs, like his single “My Pen Is,” he uses a beat marketplace—like Lil Nas X did with “Old Town Road.” Angelo says he has a few new songs on reserve that he’s excited about, but he’s trying to plan out how to work on them and release them in the most effective way he can.

“The whole TikTok ban really lit a fire under me,” Angelo says. “I was like, all right, it’s time to move, it’s time to migrate. I can still obviously have fun on TikTok and use it to give me an outlet, of course. But, you know, I can’t keep relying on these platforms that can be taken away in seconds.”