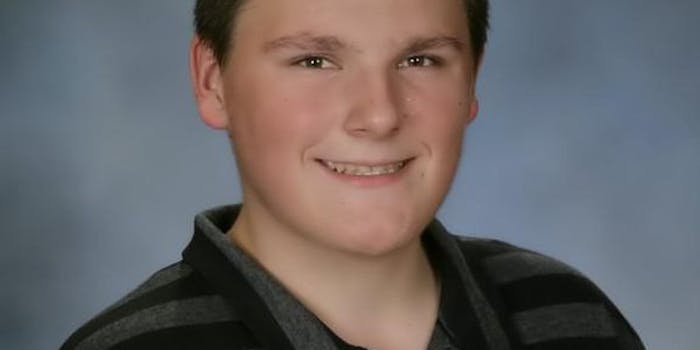 Just when it looked like Mike Stone had finally scored a date for prom, his parents and principal caught wind of his Twitter tactics.

He’s had some luck, too. Megan Piper, whose Twitter profile picture isn’t even safe for work, said she would attend the dance if he could afford to fly her out. But after Stone found some minor Internet fame, trouble has come home to roost for the teen.

On Tuesday, according to Stone, a woman who runs a community website in Oakdale, Minn., discovered Stone’s Twitter profile and reported its existence to the principal at Tartan High School. The senior was called in for a meeting shortly after.

“He was saying that it’s not a good thing to do that,” Stone told the Daily Dot later that afternoon.  “I said, ‘I was just doing it to see what actually happened.’

“He said I’m not in trouble but said I should get out of that stuff. He told me not to get into any more drama like this.”

But the drama didn’t stop there.

“She’s really mad about it,” Stone said after speaking with his mother. “She’s saying I embarrassed them now.”

Despite all the headaches endured, tweeters have been cheering the teenager on.

“[You’re] my new short term hero right along with Jeremy Lin and Tim Tebow. Have u started a fundraiser?” tweeted @WhooFleuryScore.

The Daily Dot spoke briefly with Stone in between his classes on Wednesday. He said he’s unsure where his prom experiment will go from here.

But judging from his Twitter feed, he’s still trying to raise money to score a date.

Where’s Kickstarter when you need it?

The Daily Dot has reached out to the principal for a comment and is waiting to hear back.

Update: The Daily Dot spoke to the woman who runs the community website Stone referenced. She said that she did not report Stone to the principal but instead made an inquiry for a news report she was working on. We’ve clarified the text accordingly.