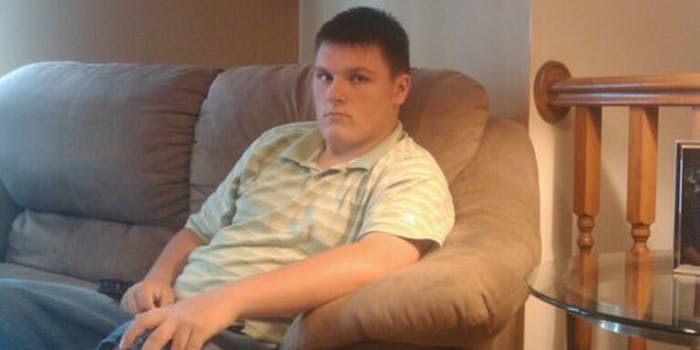 After more than 600 attempts, Mike Stone finally found a date for prom. Now all he needs are the funds to fly her to Minnesota.

In the 2004 comedy The Girl Next Door, Emile Hirsch plays a bored high school senior who unknowingly befriends an ex-porn star whom he brings to prom.

“I was just thinking of doing something new,” Stone told the Daily Dot with some apprehension. (Neither his parents nor his school are aware of his efforts.) “I was like, let’s try it out and see if it works. I just think they’re really cute and I wish I had one for a prom date.”

Before prowling Twitter for a date, Stone says he asked a slew of girls from his school but was turned down “because all the guys that I know are already going with them,” he said.

Stone was the subject of a top post on social news site Reddit over the weekend, propelling him to Internet fame. He collected more than 750 Twitter followers almost overnight, and some of his friends have taken to Twitter to support him.

“They just say try your best and hopefully someone will say yes. I think it’s kind of nice that I’m getting responses back. I was actually thanking people who are cheering me on and telling me to keep on with it. They keep telling me I’m a legend and a hero.”

If Stone is able to land a date via Twitter, or finds the funds to get Piper to Oakdale, he’s fairly certain she’ll be able to get into the prom without a problem, he said. But if something does come up, Stone has a plan.

“One of the teachers who works at my school is a security guard,” Stone said. “He was telling me, if I brought a girl from a different school or anything, he would help me out and let them in for free.”

At the top of Stone’s prom date wish list are adult film actresses Eva Angelina, Madelyn Marie, and Bree Olson, who rose to fame after actor Charlie Sheen made her one of his live-in girlfriends and “goddesses.”

Let’s hope this teen drama has a happy ending.