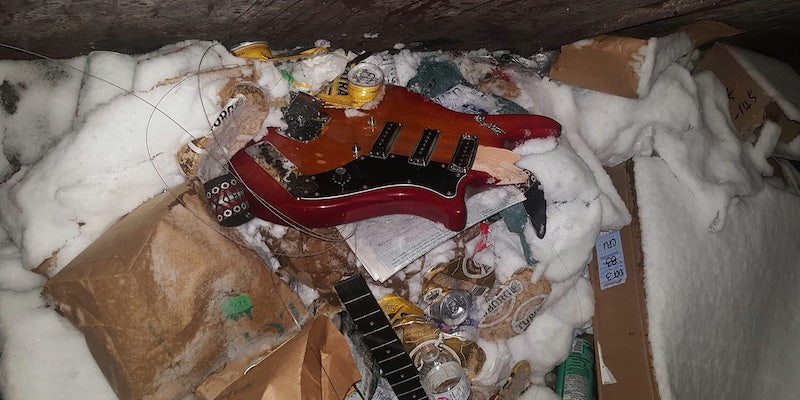 Metal band shares the best breakup post of all time

There's cheating, a broken guitar, and even a dead drummer.

Toronto metal band Witchrot is no more, and ironically enough, the band’s breakup may be its best work yet.

Just one month after the female-fronted doom metal stoner band debuted its first EP, band member Peter Turik pulled the plug after he learned “the unfortunate reality of our guitarist fucking my girlfriend.” Unfortunately, the band couldn’t outlive the affair, although Turik is sure Witchrot will continue “in another space and time.”

“Due to the unfortunate reality of our guitarist fucking my girlfriend of almost 7 years WITCHROT will be taking an extended hiatus,” Turik announced. “I however will continue the band in another space and time, being ripe with hate the music is slowly flowing and without a doubt will become the most devastating, torturous music I have ever created.”

For good measure, he even threw in a photo of a broken guitar in trash, and the small fact that “our drummer died.” Yikes! (For the record, the drummer’s death appears to be a nod to Spinal Tap.)

It didn’t take long for Witchrot to go viral on Twitter, with the band’s breakup quickly hailed as the internet’s “favorite band breakup notice ever.”

This is my favorite band break-up notice ever. pic.twitter.com/WsIq1i2d6p

The accompanying picture of a smashed guitar in the trash is the icing on the cake. pic.twitter.com/wCutl7CJSD

this should be taught in writing workshops https://t.co/OFptxKQaBd

Theres so many layers to this https://t.co/M3OmYulVTp

I want to know what happened to the drummer.

That’s terribly tragic, but that had me rolling. Hahaha

Even Ted Cruz is getting wrapped up into Witchrot’s saga.

Witchrot may be gone, but don’t worry, Turik is still making music. His band Crazy Bones is still kicking, where he plays guitar, ironically enough.