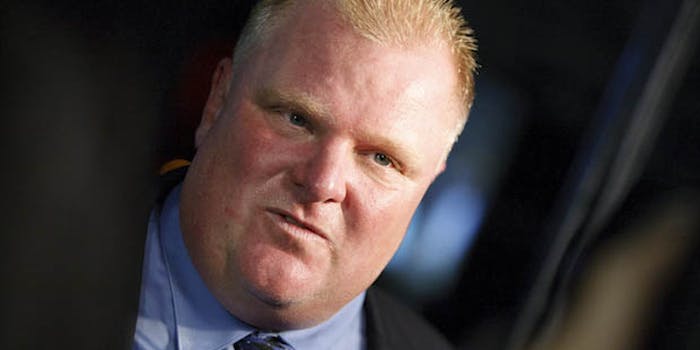 So that's how politicians mark their territory.

The big news today in Toronto had to do with Mayor Rob Ford’s connections to drug deals and murders as outlined in a now publicly available ITO or “information to obtain” document, a form intended to justify the issuing of a search warrant on “reasonable and probable grounds to believe” a crime has been committed. The investigation into Ford’s activities resulted in an unusually hefty report, some 500 pages thick—and amid all the murk and sleaze, one could have easily missed an amusing result of the intensive police surveillance.

Alexander “Sandro” Lisi, an alleged drug dealer, was the real point of interest to Toronto law enforcement here; they just announced his arrest for extortion as part of “Project Traveler,” a drug operation in the northwest end of the city. But whatever big-time charges they ultimately slap Ford with, we hope he gets an extra citation for befouling the natural beauty of his city—with a few hours of community service added to his sentence.