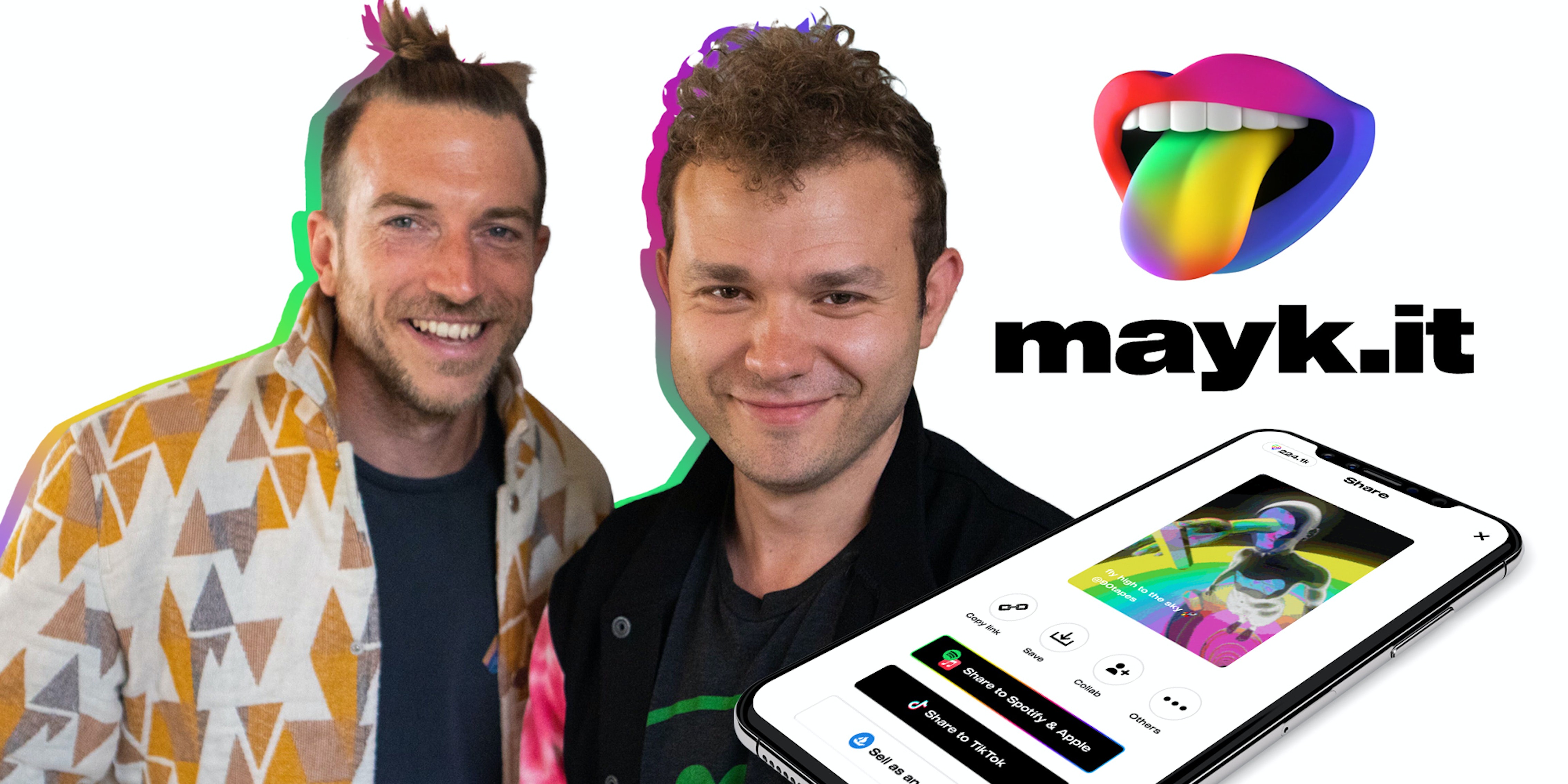 We’re sitting down with leaders on the business side of the creator economy to get their best advice for creators looking to launch and develop their careers. This week, we spoke with Stefán Heinrich Henriquez, the co-founder and CEO of Mayk.

Mayk describes itself as a song-creation “virtual studio” offering voice filters, song-writing prompts, lyric generators, royalty free beats, and editing tools to ease users along the music creation process. It is geared towards creators who have little background in music production but would like to customize royalty free music for their videos, podcasts and other content. It also offers social elements, allowing users to scroll through a short-form music feed and discuss songs with others on the app.

Henriquez told Passionfruit about the lessons he’s gleaned from working at major companies like YouTube, TikTok, and Cameo; Mayk’s music-first vision and its appeal to creators; his advice for creators using the platform; and what trends he’s paying attention to.

Stefán Heinrich Henriquez has led an impressive career, working at some of the largest creator-oriented tech companies in the game. He studied media in college and worked as a marketing manager at Google early in his career.

However, Henriquez said he always wanted to move to working with YouTube, which is owned by Google’s parent company Alphabet. Luckily, he said he landed on the “new products” team, and went on to spearhead the launch of YouTube’s paid subscription product YouTube Red (now known as YouTube Premium).

Previously, YouTube was one of the primary platforms for musicians who wanted to use social media to market their music.

“[It’s] a creator economy ‘pioneer product’ at this point, similar to maybe Patreon, on the first-wave, because it increased the money creators would get compared to ads,” Henriquez told Passionfruit in an interview. “It was still very, I would say, unfair, of how the splits would go between what the music industry gets and what [creators] get… I think I saw some unfairness and it informed Mayk.”

Following his time at YouTube, Henriquez started working in marketing at Musical.ly during its early stages. Soon, he rose in the ranks and eventually became head of global marketing at TikTok. He said TikTok’s in-app video-editing format brought on an entirely new “league” of creators.

“During the YouTube days, it was super hard. You had to learn Adobe Premiere and video-editing. And then we put a simple Adobe editor, basically, into [TikTok],” Henriquez said. “That just brought on so many more creators than before.”

In 2019, Henriquez left TikTok and became chief marketing officer of Cameo, the app that allows users to purchase video shout outs from influencers and celebrities. However, he said he began to notice most creator economy apps were catering towards visual creativity, whereas he believed there were a lot of people—musicians in particular—who don’t want to put “their face and body out there” on social media.

“TikTok took what MTV and radio was, and made it so that you almost have to be visually present and play influencer as a musician in order to make it. So we thought, okay, if that’s the case why does it need to be, and could there be a music-native platform?” Henriquez described.

Alongside Akiva Bamberger, a former engineer at Snapchat, Henriquez co-founded Mayk in 2020. Mayk aimed to be an audio-driven company, taking some of the visual necessity out of social media. For example, it allows users to use avatars instead of profile pictures, and doesn’t require video or photo creation to participate.

“I was making music all day at home and loved making songs. I would post them on YouTube, improvise on Twitch, and send drafts to my friends through iMessage. When I started building Mayk, it was the perfect place to post a song and let friends enjoy it. It felt very important to share that experience with more people,” co-founder Bamberger told Passionfruit.

Bamberger said that Mayk makes it “easy and fun” for people to start making music on the platform. Although Mayk is still in its early stages, Henriquez said he can foresee users “playing musician” more on the app as it develops—becoming kin to console games like Guitar Hero or Rock Band.

“They can create their alter-ego artist basically, and be whoever they want to be,” Henriquez said.

After using the app, Mayk’s platform indeed seems to reignite the fun in music creation, feeling like an approachable game for those without music-making experience. With the option of anonymity and facelessness, many users on the app are able to create beats, sing shamelessly, and try their hand at comedy without fear of judgment. The lack of pressure allows for a freer flow of creativity and experimentation.

“I think that’s why it’s very different than other music tools companies. They’ve always come from the insider, or like professional, view of a musician…You need to have some understanding of chord progression, or harmonies, or mixing specific instruments together to get music out of the software.” Henriquez said. “High technical barrier and low self expression. I wanted no technical barrier, high self-expression.”

Mayk’s homepage somewhat resembles TikTok, with short-form songs created by other users appearing algorithmically. Memes, jokes, and metaverse-y aesthetics are scattered throughout its layout, making for an engaging virtual experience. You can scroll through songs to like, comment, or follow the creator of the video. Users can connect, and even invite each other to collaborate or remix each other’s songs.

The app also gives users the option to explore genre, community, or themed “stations”—like “queer.fm” or “LOL.fm.” Additionally, it has a “charts” section where users can listen to the app’s top-performing songs.

While there are no current in-app monetization features on Mayk, all songs created on the app can be exported and monetized elsewhere online, like on Spotify, TikTok, or even sold as NFTs on OpenSea.

We spoke with some creators who use Mayk about why they decided to join the platform. Creator Taylor Imbrue (@pendragon) is a TikToker with over 40,700 followers who makes spirituality, lifestyle, and comedy videos. Imbrue is also a musician, who shares songs to Soundcloud and Mayk. Imbrue told Passionfruit Mayk’s tools help bring his creative ideas to life.

“Mayk is a creative playground where you can archive your ideas, record songs and just have fun,” Imbrue shared. “You can boost your song to get it on the charts. You can also boost songs from other creators…Mayk’s recording studio which has the ability to record multiple takes in one track and has many cool effects to fine-tune your vocals.”

Another creator, Kubota (@kubotamusic_jp), is a TikToker with over 41,000 followers who is popular for Japanese language lessons, music production, and rapping videos. He told Passionfruit that a Mayk team member reached out to him to convince him to try the app, and he was sold.

“As a music artist, this sounded like a fantastic opportunity. Once I joined the community, I realized how lively their team and users were,” Kubota described. “You can find amazing beats and instrumentals at ease and quickly hop on them with your own lyrics. My favorite thing to do there is trying out lyrics from previous songs I had published and testing them with beats that differ greatly from the original piece of music.”

Phat Pipes (@phatpipes), another TikToker with over 51,500 followers, said she joined the app as a music lover and amateur musician.

“I stayed because it’s so fun to join challenges and remixes, and hear other people’s spins as well as support each other’s endeavors… My favorite features include the ‘remix’ feature,  AI-lyrics, the ‘vibes’ for the music, and the different charts. The different station charts and playlists especially because you can filter out what you want to listen to as well,” Phat Pipes told Passionfruit.

Looking toward the company’s future, Henriquez wants the app to become even more playful, immersive, and interactive—much like video games. Paying attention to creator economy trends, Henriquez is interested in how people will evolve their discovery of new music, as the barrier of entry for music creation lowers.

“I think we can really bring niche or meme songs out as a category,” Henriquez said. “I think there’s a general belief that creator music and amateur music or meme music, whatever you want to call it, is going to be a genre.”

Henriquez continued, “I think it fits perfectly into the post-Instagram, post-beauty world that we live in. People want more raw, real, authentic content. If you look at TikTok videos, it’s so much more real than Instagram photos which are super photoshopped. Music is almost too perfect now… It’s all about dressing down and music is so dressed up right now.”

Are you launching a creator economy company? Reach out to [email protected] for a chance to get featured in a newsletter.