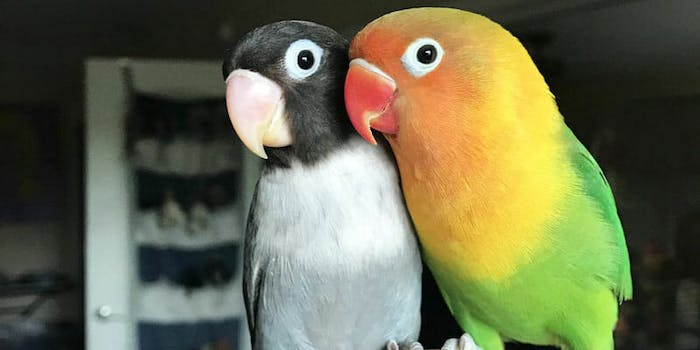 Finally, a love story to capture the attention of the internet without anyone getting doxxed and their lives basically ruined. Animal lover Maura Hennelly regularly populates her Twitter account with updates on her various exotic pets, and last year she revealed to her followers that she had gotten a “goth” mate for her lovebird Kiwi (a small genus of parrot), which she appropriately named “Siouxsie”—after the lead singer of the post-punk band Siouxsie and the Banshees.

The pair quickly took to one another, as you can see from her subsequent posts:

I'm such a 3rd wheel pic.twitter.com/U4J8J5xmxS

Fast forward to nearly one year later, and Maura has provided an update to the lovebird love story. Kiwi and Siouxsie—who is now his “wife,” naturally—are the proud parents of four adorable baby half-goth chicks.

Although the babies are four weeks old, Maura has been keeping her followers in the loop since the happy couple became expectant.

Kiwi & Siouxsie's first baby was born today!! Her baby fluff is turning yellow so I think she'll end up looking like her dad. She's back in the nest now and Siouxsie is taking great care of her ❤ 3 more eggs to go! pic.twitter.com/pSTnXt9CwN

Update, 3 little angels have hatched and one more is pipping!! ❤️ pic.twitter.com/zWrH4tpSH0

I love being a bird mom pic.twitter.com/ek1anJLKh5

For inquiring minds, Maura is indeed looking for homes for the four babies to any interested California locals, when they’re fully weaned at eight weeks with an adoption fee. She adds that the babies are “currently being hand-fed and handled daily,” and are “already super sweet & tame.” Before adopting them out, she also plans to get them vet checked, DNA sexed and ID banded.

Sadly, keeping the family together is probably not an option as another person added that allowing baby birds to stay with their parents for too long isn’t a great idea, because even in a domestic setting the adult birds will start plucking out the babies’ feathers “as a way to drive them out of the nest to grow up on their own.”