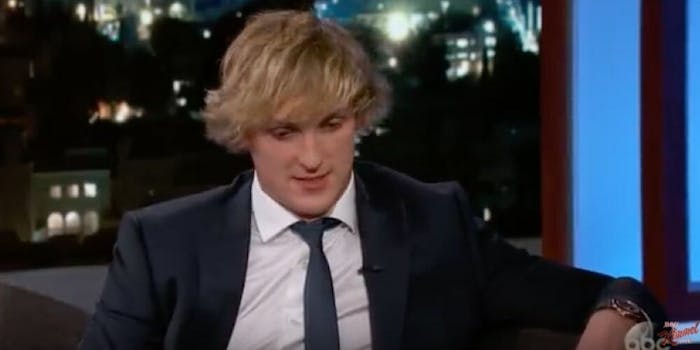 The YouTube star misjudged a jump onto a table and paid the price.

Famous YouTube bro Logan Paul is missing 15 percent of his right testicle, he revealed to Jimmy Kimmel and the world this week. The fraction of a testis was taken from him when one of his Jackass-like stunts—the premise of YouTube career and his show Logan Paul Versus—went predictably awry.

“You ever get hurt doing this stuff?” Kimmel asked.

“Let me tell you about my testicle,” Paul chuckled, bro-ishly.

Turns out, he’s missing 15 percent of it because of a wild incident involving his best friend (a dwarf named Evan), a Godzilla mask, a shopping mall, and a table that was not as sturdy as Paul had hoped for. You should listen to him tell the whole story in his affable, “yo, bro” manner, but the punchline is that he did the splits right onto a chair, damaging his right ball.

Three days later, he finally thought, “Damn. Gotta go hospital,” and the rest is … what I guess counts as history in the year 2017? Paul assured his fans that the missing part would be unnoticeable if you hadn’t just heard, in fairly graphic detail, how he lost it.