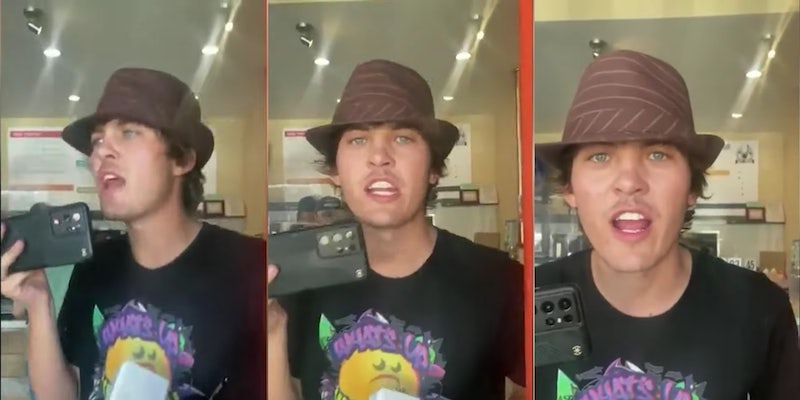 When one woman tried to confront him, he ran away.

A reactionary live streamer has gone viral after video footage of him using racial and homophobic slurs at a taqueria in La Mesa, California circulated across social media. People are demanding he be deplatformed.

The streamer, known as Based_Surfer, is part of IP2.NETWORK, a platform for “IRL streamers” apparently known for “edgy,” offensive, and even racist content. IRL streamers are creators who live stream events that happen “in real life.”

According to YouTuber Joseph Morris, Based_Surfer is also friends with white nationalist Tim Gionet, also known as “Baked Alaska.” Gionet was arrested for his role in the Jan. 6 riot at the Capitol.

Several video clips of Based_Surfer shared on social media show him using the N-word and a homophobic slur repeatedly. Other clips show him harassing two women by calling them “Karens” and criticizing one’s body.

Morris broke down several of the clips in his Sept. 13 video, titled, “Racist live streamer Based_Surfer has PUBLIC FREAKOUT on ‘Karens’ for IP2 Community.”

Morris played a clip from the incident showing Based_Surfer moments after he was rejected by two women, who he then proceeded to call “fat as fuck.” Then, he repeatedly called the two white women the N-word. Later, when one woman swung at him, he ran away.

Video footage of the incident is pinned to an IP2 Network Twitter profile, although it’s unclear if it’s an official profile for the network. Some folks viewed the pin as an indication that the network was “proud” of Based_Surfer’s outburst.

Morris also noted in his video that Based_Surfer previously garnered attention last month by harassing a street vendor about his vaccination status. He then appeared to get in a physical altercation with the vendor.

A popular TikToker known as @TizzyEnt shared a clip of Based_Surfer interacting with the two women, who are white, saying that the streamer “wouldn’t have had the sack” to use the N-word if any Black people had been near.

Several people on Twitter called for streaming platform Twitch to remove Based_Surfer from the platform, but it appears his channel was already taken down as of Wednesday evening. Twitch did not provide a comment to the Daily Dot by the time of publication. The Daily Dot reached out to the La Mesa Police Department and was unable to contact Based_Surfer.