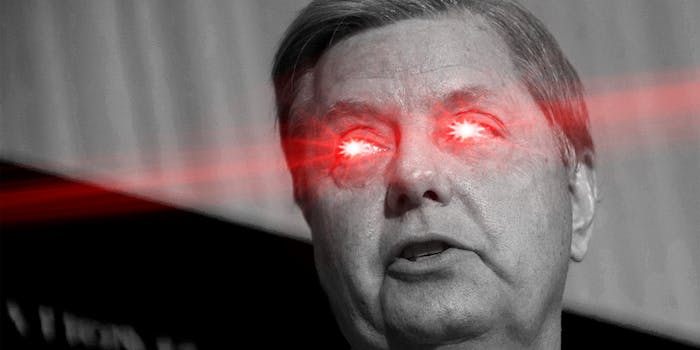 Lindsey Graham 2.0 is the far-right’s based new meme lord

Senator Lindsey Graham (R-S.C.) catapulted back into the spotlight during the Brett Kavanaugh hearings when he played defense for the Supreme Court nominee, screaming at Democrats on the Senate Judiciary Committee and branding the hearing an “unethical sham.”

It was a new look for the formerly timid lawmaker and it turned him into a superstar for the Trump wing of the party. Not only did Graham parlay his outburst into a string of appearances on Fox News’ prime-time programs, he became a hero to right-wing meme culture.

During the Kavanaugh hearings, Graham let loose on the left, saying “what you want to do is destroy this guy’s life, hold this seat open and hope you win in 2020.” He went on to tell Kavanaugh “you’ve got nothing to apologize for.

Moments later, Graham told the Democrats “boy, you all want power, I hope you never get it.” He told Republicans “if you vote no [on Kavanaugh], you’re legitimizing the most despicable thing I have seen in my time in politics.”

The new Lindsey Graham—one who is willing to bellow across the aisle at Democrats, and some who say saved the Kavanaugh nomination—is now being embraced by the Trump loyalists in the party.

His publication, The Daily Wire, sent out a clip of Graham telling CNN’s Kate Bolduan “if you don’t like me working with President Trump to make the world a better place, I don’t give a shit.”

Over on r/the_Donald, he was praised as “the best upgrade” ever, going from lap dog to battering ram.

Suddenly, everyone on the right loved Lindsey Graham.

In introducing Graham just after Kavanaugh was confirmed, Sean Hannity called him “a man who deserves a lot of credit for this moment.” Moments later, Hannity said, “I don’t think we would be here without your courage.” And before Graham got off the air, Hannity added, “Senator, you’ve served your country very well in this process, thank you for all you did.”

Graham returned to Hannity on Monday night and the host began, “I don’t think would have happened without you.”

When he appeared on Laura Ingraham’s show, she introduced him as “the man who has really led and galvanized the GOP’s efforts to rally behind Judge Kavanaugh.”

She went on to say that she “loved” Graham’s outburst during the hearings.

But their newest meme star hasn’t always been a fan of the president or his supporters.

He and Trump first butted heads during the 2016 campaign when they were both among the massive field of candidates vying for the Republican nomination.

The most famous moment of that tension came in the summer of 2015, when Donald Trump launched into one of his trademark string-of-insults, calling Graham a “lightweight” and an “idiot” and in a what has to be a political first, gave out Graham’s private phone number. In response, the South Carolinian called Trump a “jackass.”

Graham, like all the other candidates, was unable to overcome the media’s addiction to the Trump show and soon dropped out.

But slowly, Graham bent to the will of the Trump. In an embarrassing bout of brown-nosing, the South Carolina senator went so far as to laud Trump’s golf score on Twitter.

Really enjoyed a round of golf with President @realDonaldTrump today.

President Trump shot a 73 in windy and wet conditions!

You will now have a tough time spotting Lindsey Graham saying anything critical of Trump. In a recent editorial following the Kavanaugh hearings, the New York Times called him “the saddest story in Washington” and referred to him as “Donald Trump’s slobbering manservant.”

Previously, Graham backed the checks-and-balances of Washington, even saying that if Trump fired Robert Mueller “that would be the beginning of the end of his presidency.”

But that has since changed and in late August, he said that he supported Trump firing Attorney General Jeff Sessions, reasoning that “the relationship is not working.” He suggested that Sessions’ replacement should also protect Mueller but Trump would almost certainly find a replacement that’s as eager to ax the special counsel as he is.

In Washington, there is wide speculation that Graham has his eye on Jeff Sessions’ job. But he has denied that’s the case, saying recently, “I have zero interest in serving President Trump’s cabinet.” He added, “I feel I can do more good for the country and help President Trump more effectively by being in the Senate.”

But either way, he’ll continue to be a star online