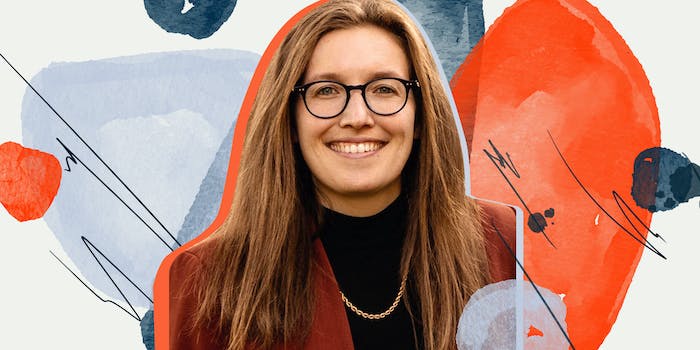 We’re sitting down with leaders on the business side of the creator economy to get their best advice for creators looking to launch and develop their careers. This week, we spoke with Lauren Zoltick, Director of Performance Marketing at Storyblocks, about pay transparency for creators, diverse representation in marketing, and why she’s paying attention to YouTube as a fan-favorite platform for creators.

Zoltick is a marketer with over a decade of experience launching social media, digital media, and influencer marketing campaigns for high-profile brands like Marriott International, Kroger, Volkswagen, and the Bill and Melinda Gates Foundation. Now, she’s continuing her career at Storyblocks.

Lauren Zoltick told Passionfruit she first fell in love with marketing at a comedy club. There, she landed her first job as a video producer out of college. Every week, Zoltick would shoot and edit videos of comedy sets to post on YouTube—which soon gained traction and boosted ticket sales.

“This was like in 2011, so it was more of a wild wild west of organic social performance,” Zoltick said. “I was like, okay I like this. There is something about social marketing that is fun to me.”

Zoltick transitioned into a career in social media, digital media, and influencer marketing, launching campaigns for clients like Marriott International, Kroger, Volkswagen, and the Bill and Melinda Gates Foundation. During the pandemic, she became interested in working with a company which catered to creatives like herself—leading her to discover and join Storyblocks.

Zoltick has overseen paid marketing, social media, and influencer partnerships for Storyblocks for about two years now. She has helped substantially grow the Storyblocks YouTube channel, which has almost 30,000 subscribers and features video editing tutorials, creator interviews, and tips and tricks series.

One series on the Storyblocks YouTube channel called “How I Made This” features creators breaking down how they made a high performing YouTube video on their own channel using Storyblocks stock media files.

“It’s a great platform for us because it’s sort of meta. We’re speaking to video editors about video editing,” Zoltick said about promoting Storyblocks on YouTube. “It really resonates with our target audience.”

The YouTube channel also features videos dedicated to BIPOC and LGBTQIA+ creators who work with Storyblocks. Zoltick said the videos show off the diverse content the creators are making behind-the-scenes for the Storyblocks library.

Sonya Ballantyne, an Indigenous writer and filmmaker, was approached by Storyblocks to shoot footage under the theme of “Indigenous Joy” as a part of a larger campaign to expand its stock library’s representation of Native American and First Nations communities. Ballantyne said as a creative, she has struggled to find non-stereotypical footage of Indigenous Peoples in mainstream, traditional stock websites.

“It was really bothersome to me. I was like, ‘I need something that’s not stereotypical. It would be cool to have images of people just living their lives’… When they approached me with the idea of including more diverse content in such a white space it was something I felt really passionate about,” Ballantyne told Passionfruit in an interview.

Ballantyne also expressed that while stock footage is traditionally seen as a non-creative, generic field of work, she was able to have a lot of creative freedom while working with Storyblocks—saying the project made her “look at something corporate with new eyes.”

Zoltick said she encourages creators to always approach partnership videos with their own unique perspective, and said brands often make the mistake of not giving creators enough “creative freedom” to make the best content for their audiences.

Furthermore, Zoltick said many brands fail to step up to the plate to guarantee pay equity between white creators and creators of colors—referencing a study which found the racial pay gap between white and BIPOC influencers is 29%. She also pointed out another study on the gender pay gap in the creator economy, which found that despite women making up the majority of paid creators, women creators made on average 30% less than men creators.

She advocated for transparency on the brand side of sponsorship deals, saying companies should spell out why they are paying a certain amount for a creator’s time.

“What we’re looking for is based on how much labor we’re putting into something, and the cost we’re spending to the creator, how much money are we getting back and is it sustainable to run our business,” Zoltick explained.

From the creator’s side, Zoltick recommends looking into how much time and money goes into the content you’re producing, talking to creators of various sizes and niches to see how much they’re making, and figuring out the price you need from a brand partnership in order to sustain your livelihood.

Ballantyne said Storyblocks was flexible and understanding throughout the pay negotiation process for her work. Her team responded to Storyblocks’ initial pay offer for stock footage, requesting almost $3,000 more for their film production budget. She said in Canada, where she is located, it is less common for filmmakers to own as much of their film equipment as they do in the United States—making it more expensive to shoot. Once Ballantyne explained why she needed more money, Storyblocks agreed.

“We went into a huge, like, Powerpoint presentation on this is why we need this. They were very helpful in accommodating us, especially because we wanted to do the best we could do. It helped us to actually pay our models the rate they deserved,” Ballantyne said.

Ballantyne said she enjoyed being a part of the Storyblocks YouTube channel, and although she partially dislikes social media for its colonial roots and tendency to attract hate speech, she said she appreciates the platform making filmmaking more accessible.

“With the rise of digital, more people like me can take part in [filmmaking] without having that glass ceiling of not being able to afford things. With YouTube, that’s something I really enjoy,” Ballantyne said.

Zoltick said YouTube is one of her favorite social media platforms, and as she looks to the future of the creator economy, she is paying attention to how its creator fund stacks up to other sites’ monetization options.

“From a creator perspective, that’s why there’s a lot of loyalty to platforms like YouTube. It continues to be the biggest platform creators are publishing on, because they have a creator fund that actually can give people a living,” Zoltick said.

Do you work at a company within the creator economy? Email [email protected] for a chance to get featured in an upcoming newsletter.