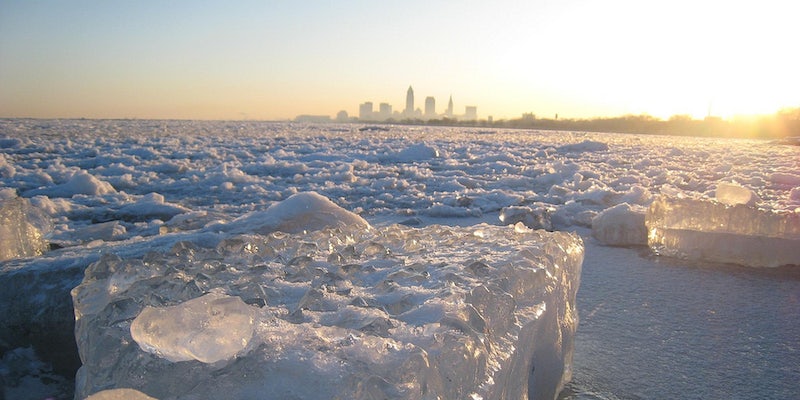 Lake Erie is frozen—and the photos are stunning

Lake Eerie reportedly became 100 percent frozen on Monday for the first time since 1996. Frigid temperatures brought a plate of ice estimated to be between 16 and 24 inches thick.

More arctic weather is on tap for the week, and total Great Lakes ice coverage could reach record-setting levels. Erie freezes wholly because it is comparatively shallow relative to other Great Lakes; its average depth is 62 feet, whereas Lake Ontario’s is 282 feet. Here’s the massive ice cube, as shown through viral Twitter photos.

Still open water on Lake MI (it never freezes — too choppy and deep), but Lake Erie is 100% complete sheet of ice. pic.twitter.com/43zsLwEvgZ

4PM, 0 degrees, sunny. What better time to go to the beach? Note the frozen waves from Lake Erie at Mentor Headlands: pic.twitter.com/GQnP2uc99f

#LakeErie is like a lunar landscape. Frozen dunes of ice water as far as the eye can see. @DCNRnews @visitPA pic.twitter.com/b7E54Uwanh

for the first time since 1996: Lake Erie close to freezing over – Windsor Star https://t.co/nTJRsp1zD7 pic.twitter.com/NHsIdABwNq

It is Negative 10 on Lake Erie. How much of the lake is frozen? @TODAYshow in minutes. pic.twitter.com/BZu5IQuAgC

Even on a Frozen Lake Erie @CP3 sneakers are hte way to get around! @Jumpman23 pic.twitter.com/eOeiA1mABw

While the Great Lake presently looks like the ice planet Hoth, you definitely don’t want to attempt a hike from Ohio to Canada.

Photo via Teknorat/Flickr (CC BY SA 2.0)