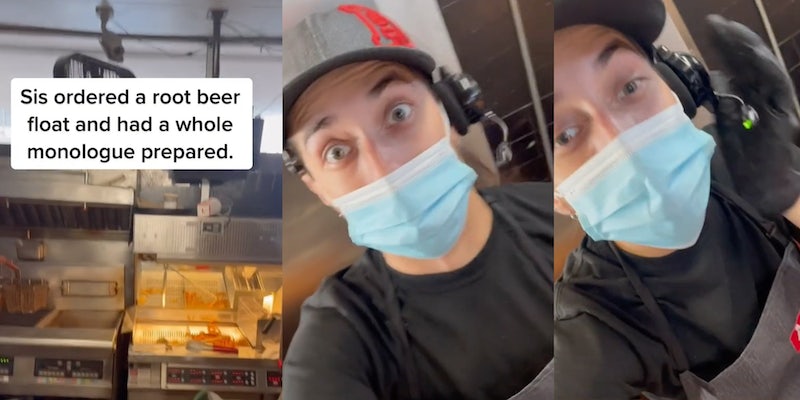 ‘I don’t get paid enough for this’: Karen yells at Arby’s worker about root beer float proportions

Apparently, there was too much ice cream, not enough soda.

If you’ve ever had a root beer float, you know it’s a pretty simple drink: ice cream and root beer. But one woman, dubbed a Karen on TikTok, had a lot to say about the root beer float she received from an Arby’s restaurant.

A TikToker known as Ignacio or @ignastyo, who appears to work at the Arby’s, shared audio of the Karen’s rant to the platform on Monday. The video received 1.7 million views and over 280,000 likes as of Tuesday.

Apparently, Arby’s didn’t make the root beer float how the Karen liked it. They put a “whole bunch” of ice cream and then filled it up with soda. Many would argue that this is exactly how you make a root beer float, but not Karen.

She repeatedly said she wanted to be able to suck “all the way through.” That way, she could have a drink, not a pile of ice cream. Because apparently only toddlers enjoy ice cream. One TikToker commented that for someone who isn’t two and a half years old, the woman shouldn’t be throwing a tantrum.

“I want a root beer float, which means root beer comes first before the float,” the Karen said. “So, light ice cream, but I still want it in there.”

At that point, Ignacio appeared to be tired of the rant and cut her off, saying, “OK, so a small root beer float? Gotcha.”

The Karen replied, “OK, yeah” and seemed to continue talking, but the audio cut off. Ignacio’s on-screen caption read, “I don’t get paid enough for this.”

“Like girl just make your own root beer float at this point,” one viewer commented.

Someone else wrote, “And people wonder why there’s an employee shortage.”

Others pointed out that she should have just asked for light ice cream from the beginning.

“‘A small root beer float light on the ice cream please’ [isn’t] such a difficult sentence, you know? She’s gotta explain,” one person said, while another asked, “How hard was it to just say ‘I want a smaller scoop of ice cream so there’s more soda?’ She had to give you a whole audiobook instead.”

Ignacio did not immediately respond to the Daily Dot’s request for comment.