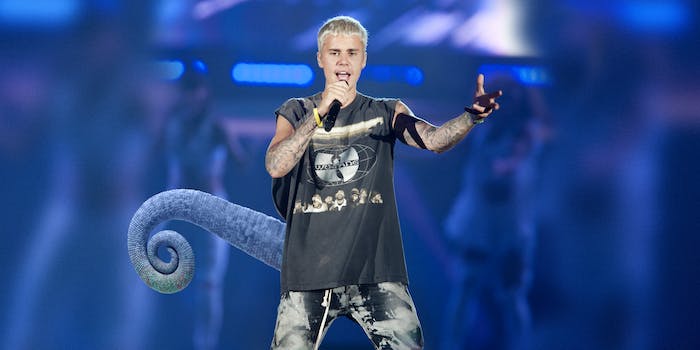 'Everyone saw it and started screaming and crying,' according to one 'witness.'

Rumors of pop star Justin Bieber‘s secret identity as a reptilian shapeshifter have once again reared their green, scaly heads.

(Allegedly) according to Australian news website PerthNow, via blog Your News Wire, via BuzzFeed News, Bieber was seen shapeshifting into a “giant reptile” in front of hundreds of fans at the Perth Airport in Perth, Australia.

The PerthNow article, which Your News Wire says was taken down an hour after being published, allegedly alleged that while greeting fans, Bieber’s head shrunk, his eyes went black with stripes down the center (which could be his Very Reptilian irises), he grew taller, and had gross-colored scales on his body.

“It happened so fast but everyone saw it and started screaming and crying. A lot of people were running for the exits,” one fan allegedly told PerthNow.

“There were girls hiding in the toilets, locking themselves in the cubicles, crying. Guys were running for the exit, jumping in taxis to get out of there. It was mayhem,” another allegedly said.

A second website alleges that Bieber comes from a “dominant reptilian-Illuminati bloodline” called the Babylonian Brotherhood, determined to usher in the “New World Order.”

This is far from Bieber’s first reptile rumor rodeo—in 2014, the Daily Dot reported on a similar conspiracy theory, this time involving Bieber’s arrest and booking for street racing while under the influence of drugs and alcohol. In a clip that aired during an O’Reilly Factor segment on Fox News, Bieber’s eyes blink to reveal some suspiciously reptilian peepers.

This month Bieber spent several weeks in Australia as part of his Purpose Tour, with his first show in the country in Perth on March 6, and his last in Sydney on March 15.

Though the article was allegedly removed from the website, Your News Wire posted screenshots supposedly taken before the post’s demise. Our own search of the article’s headline, “Hundreds Of Fans Claim They Saw Justin Bieber Turn Into Giant Reptile,” yielded no cached results from the time frame of the Australian leg of Bieber’s tour, nor the week before the Your News Wire post’s published.

However, according to Ben Martin, PerthNow’s head of digital content, the website never published the article in the first place.

Martin told BuzzFeed News said that the site doesn’t use uppercase headlines, that they didn’t publish a story with that full URL, and that a search of their content management system yielded no mention of Bieber as a reptile.

If Martin is telling the truth, there’s no definite answer for where the screen captures of the PerthNow story came from. It’s fairly easy to fake a news article screenshot—take the one below that I created from a different PerthNow article using Google Chrome’s Inspect tool with the photo taken from Bieber’s Instagram used in the original screenshot.

Or, as Your News Wire alleged, this could be one whole censorship coverup. (The writer of the Your News Wire post did not immediately return the Daily Dot’s request for comment.)

Honestly, Bieber turning out to be a lizard person hellbent on bringing the new world order through the power of pop wouldn’t be the worst thing to happen in 2017. Bring it on, Babylonian Brotherhood.

Scooter Braun, Bieber’s manager, and Braun’s public relations contact did not immediately respond to the Daily Dot’s request for comment.