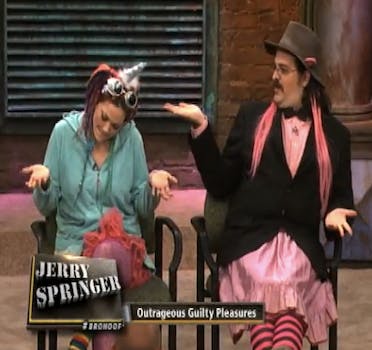 Fans of My Little Pony just got mainstream exposure in perhaps the worst way possible.

Jerry Springer’s episode on bronies caused a ruckus before it even aired.

In August, the trashy talk show host’s producer tweeted a casting call for bronies—adult fans of animated children’s program My Little Pony—to discuss whether or not their “lover objects” to their interest.

In response, the fandom, led by spokesperson and voice actress Tara Strong, organized a social media movement to keep bronies off the air to prevent them from being negatively portrayed.

However, as some bronies predicted, the campaign didn’t work.

“This summer I made headlines without even knowing it,” Springer said on the show. “We received a firestorm of angry tweets, voicemails, messages, Facebook messages, from bronies upset that we would cast them in a negative light.

The show released a YouTube video of episode clips, in which Springer interviews Autumin and Tim. The two admit to being hardcore bronies, despite, as many fans observed in the YouTube comments, knowing very little about the show.

Autumin, an adult woman with piercings, rainbow hair, and a unicorn horn, told Springer she was dressed like her favorite pony, Rainbow Dash—even though that pony is not a unicorn. Tim, a mustachioed man clad in a pink pleated skirt and fedora, said he is dressed like Pinkie Pie. (With just their aliases, the Daily Dot was unable to locate either of the alleged bronies who appeared on Jerry Springer.)

As for the actual interview, Strong’s fears were proven right.

“I’d like to find out,” the man answers as the camera pans over a section of cheering white males.