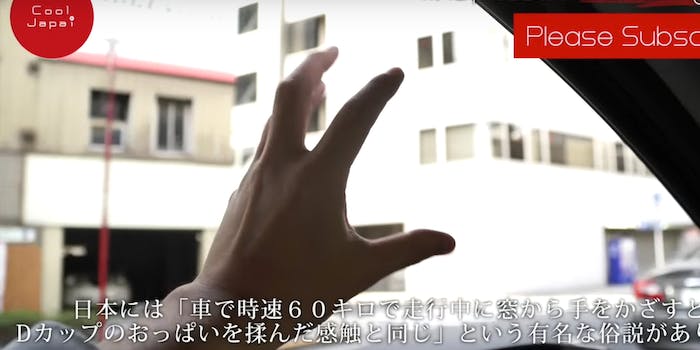 Scientists: Does holding your hand out a car window feel like cupping breasts?

Apparently, this is a thing in Japan.

Have you ever stuck your hand out the window of a moving car and thought, “gosh, that feels precisely like squeezing a D-cup sized breast?” We haven’t either.

But apparently this happens in Japan, at least according to one humorous YouTube channel, ???? ???? (Tokyo Warehouse). The channel’s series, Cool Japai, aims to document all things about Japanese breasts, and they say that it is a well-known myth in Japan that holding your hand out the window while driving at roughly 37 miles per hour creates a sensation similar to that of cupping a D-cup sized breast.

So they put it to the test. Masked, erm, scientists used pressure gauges to compare the pressure of pushing on a breast compared to the rush of air against the hand while driving. They found it was very similar.

This doesn’t quite seem like the most scientific experiment. But the sensation of the breast is probably just in the eye of the beholder… or the be-cupper, as it were.