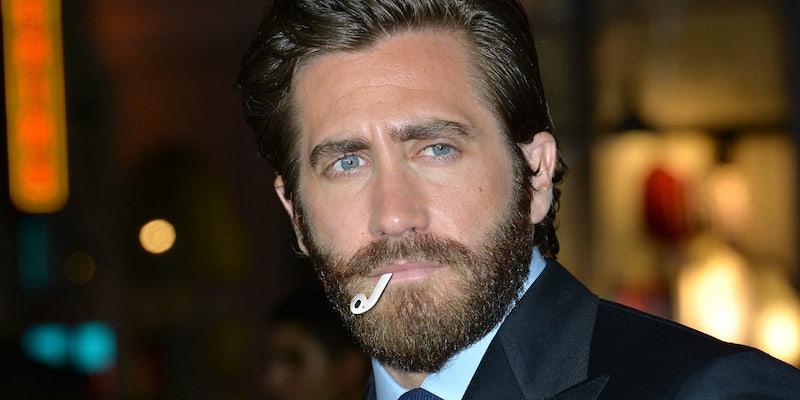 Jake Gyllenhaal’s headphone-chewing days are finally behind him

No cord? No problem.

Have you heard the news? It appears actor Jake Gyllenhaal has finally discovered an alternative to the non-nutritional value gnawing on his iPhone earbuds had previously offered him.

Previously, Gyllenhaal has been photographed several times jetting around the city with the cord to his ear buds dangling from his mouth as he carried it in his mouth like a cow chewing its cud. BuzzFeed was rightly concerned, penning a fun little letter to Jake in 2014 suggesting what might be appropriate for him to eat instead.

We’ve all been a little worried for him because wires can’t taste that good, and there’s a ton of other food you can dine on instead. Plus, if you chew on those poor things hard enough, they just won’t work anymore!

Good news for anyone concerned about Gyllenhaal’s well-being: It appears that sometime in the last year or so he’s upgraded significantly, ditching the corded earbuds for Apple’s cordless AirPods. Given how often the actor was photographed chewing on his stalwart headphones before, it’s kind of weird to see that going the way of the dinosaur.

People are, understandably, here for it. A viral tweet this week referred to the change as the “end of an era.”

@ashtonkerr4 I wish I was the headphone cord

He ate the cords, all of em, that's why their wireless now

Congratulations for moving on up in the world, Jake!

But maybe he didn’t actually buy new headphones and he just ate the rest of the cord, as this Twitter user suggests.

they're the same headphones… he just finally ate the whole wire

Maybe he had to upgrade because he was, I don’t know, CONSTANTLY CHEWING ON THE OLD PAIR?

It was fun while it lasted, watching “Jakey-poo” chew on the earbud cords, but all good things must come to an end. Hopefully, he’s no longer starving and his appetite for delicious electronics has been sated.

This should’ve been the ad for AirPods.