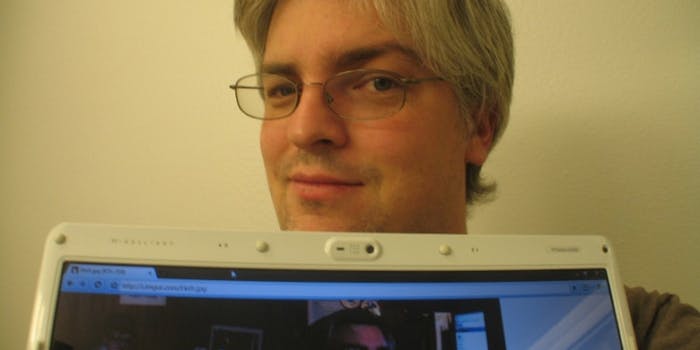 A before-and-after shot of an iconic nerd turns out to be a fake.

He’s one of the most iconic faces of the Internet.

In a nerdy still life, a chubby geek with Coke-bottle glasses and a half-smoked cigarette reposes against wood paneling with a vintage computer. When message-board users refer to the original Internet Tough Guy, they’re talking about him.

His image has become a way to enforce good manners on unruly forums: “Hey, you’re not as tough as you think you are, tough guy.”

On Wednesday, the Internet Tough Guy turned from meme to man in the eyes of Reddit users. Shayde098 posted a “Before and After” shot on the social news site. purportedly showing the ITG all grown up. Redditors were initially convinced, 20 years later, that the real Internet Tough Guy had returned—and was looking good.

But who was he, really? Some speculated the ‘after’ photo was a Rochester Institute of Technology professor. But with a little research, the Daily Dot discovered the true origin of the image. The photo is a two-year-old video still of Tim Madison, a user of the Fark message board, who said he had nothing to do with the original image.

In 2009, Madison posted a YouTube video of himself jamming in a wood-paneled room. A fellow Farker saw similarity between Madison’s wood-paneled background and the Internet Tough Guy image macro.

“Remember the ‘Internet Tough Guy’ photo of a huge glasses-wearing geek sitting at a computer smoking a cigarette? Well, here he is as an adult. No, really,” the Farker posted.

No, not really. Thirty-five-year-old Madison, using his Fark handle mirazh1976, replied to the thread with a picture of himself for proof:

“That picture, actually a video, was filmed in our outside family house in CA. ( an old garage converted into a family room back in the 70’s). I was using the dwelling at the time as a recording studio. I now reside in WA, but will be heading down to visit the family later next month. Perhaps I could take the photo of the wood paneling. Cannot be done now. Thread will have long since died out by the time I get around to it.”

When many users mistook Madison’s detailed description as confirmation that he is indeed the person in both pictures, the Washington state resident clarified later that day.

“After reading all the posts I just want to make myself very clear,” he said. “I never said I was the original Internet tough guy meme. I am the guy being compared to him.”

Madison did not respond to the Daily Dot’s requests for comment, but his Fark comments make it clear that he doesn’t know who the original ITG is, just that it isn’t him.

So keep on being tough, tough guy: This is one legendary nerd whose true identity remains a mystery.