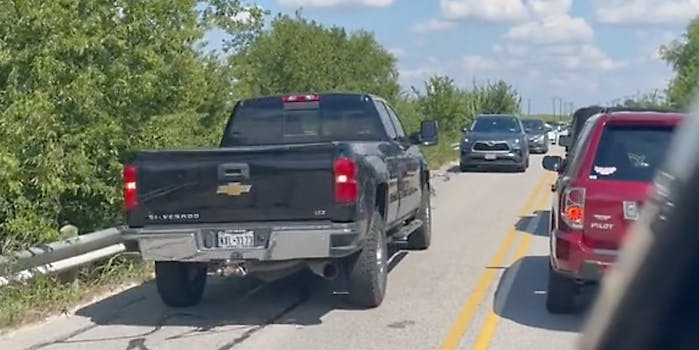 'The backup of shame.'

A viral TikTok video shows the instant karma a driver who tried to jump in front of others in a child pickup line in Austin, Texas, received.

Filmed and posted by Josh Ryden (@bryce_jr13), from his truck, he shows a person in yet another truck being driven back (in reverse) by traffic in the opposite lane.

The caption reads: “This fool tried to jump in line. #karma #texasheat #texasliving.”

It appears the cars were waiting to pick up children from school. “This fool tried to cut the kiddos pickup line,” Ryden wrote in the overlay text. “Karma.”

One viewer called it the “backup of shame.”

Another questioned some drivers’ perceived self-importance: ” I swear pick up and drop off lines bring out the crazy in people thinking their child is more important than the next.”

The video also turned from a viral video of someone’s karma comeuppance into a politicized event by commenting on the driver’s arrogance in believing he should’ve been able to jump ahead of anyone. One woman wrote, “U just know he stormed the capital on January 6th.”

One man asked: “Why do y’all always bring politics in a video. Oml, can y’all not just watch a video, laugh, and scroll on?” The first reply says, “Because it’s true. Trump hampers hate rules. They think they don’t apply to them. This is a perfect example.”

The Daily Dot has reached out to the TikToker for additional information.