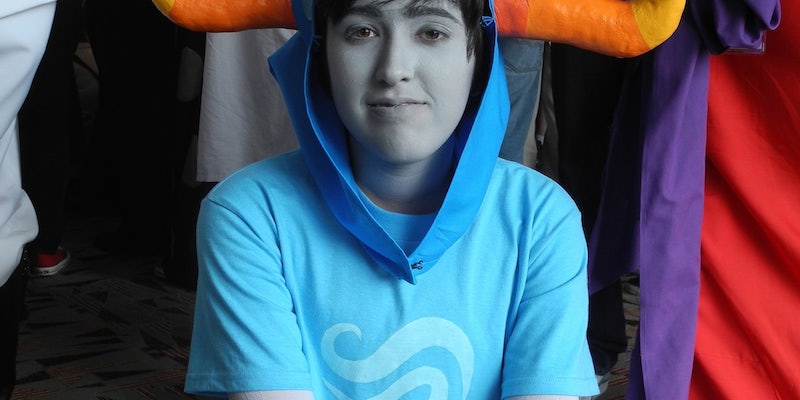 Inside the strange, brave new world of Homestuck

Homestuck isn't just a webcomic. It's an Inception-like multimedia experience, built by and for fans.

I’m surrounded by a forest of horns.

On the fourth floor terrace of the Hilton Hotel at the Baltimore Convention Center—the setting for the annual fan convention Otakon—red, orange, and yellow horns of varying shapes and sizes hover at eye level, protruding from a series of black wigs.

Bright horns, black hair, gray skin—these are the hallmarks of the Trolls, an alien race in Homestuck. These fans have convened here for a massive photo shoot, an act of devotion that’s indicative of the webcomic’s almost absurd popularity. 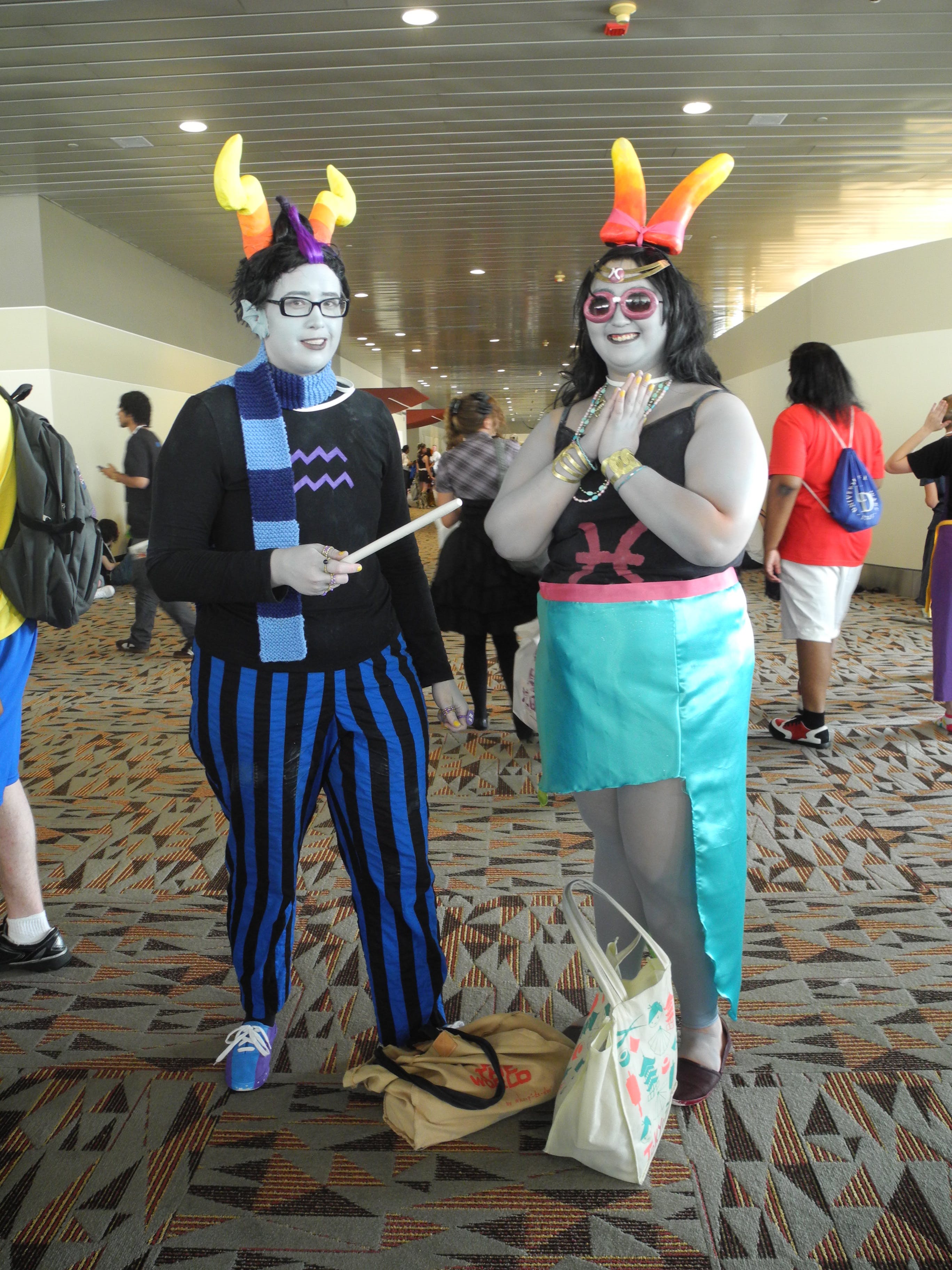 To the uninitiated, Homestuck is an inside joke—or rather, a series of inside jokes within inside jokes. It takes true dedication to get in on the fun.

Started in April 2009, the webcomic is the fourth in creator Andrew Hussie’s MS Paint Adventures series, a sprawling and epic multimedia experience that spans more than 5,000 pages of updates, with videos, Flash animations, and music. These adventures include a cast of characters larger than even the most devoted fan site—or the designated Wiki—can count.

To make things even more complicated, many of the story’s major plot points spring from random comments on Tumblr or discussions within the fandom. There are also oft-referenced themes of ‘90s pop culture and vintage video games. Its title, after all, is a direct pun on Japanese ‘90s video game Earthbound.

Every part of Homestuck is significant to fans, including symbolic numbers like 413 and 314, the latter being the meeting time for the shoot.

Here at Otakon, hundreds of Homestucks (as fans call themselves) have gathered to commemorate the occasion. Amid the crowd, a teen with enormous horns calls me out.

“Do you know how to do makeup? It’s simple, I just need gray face paint.” 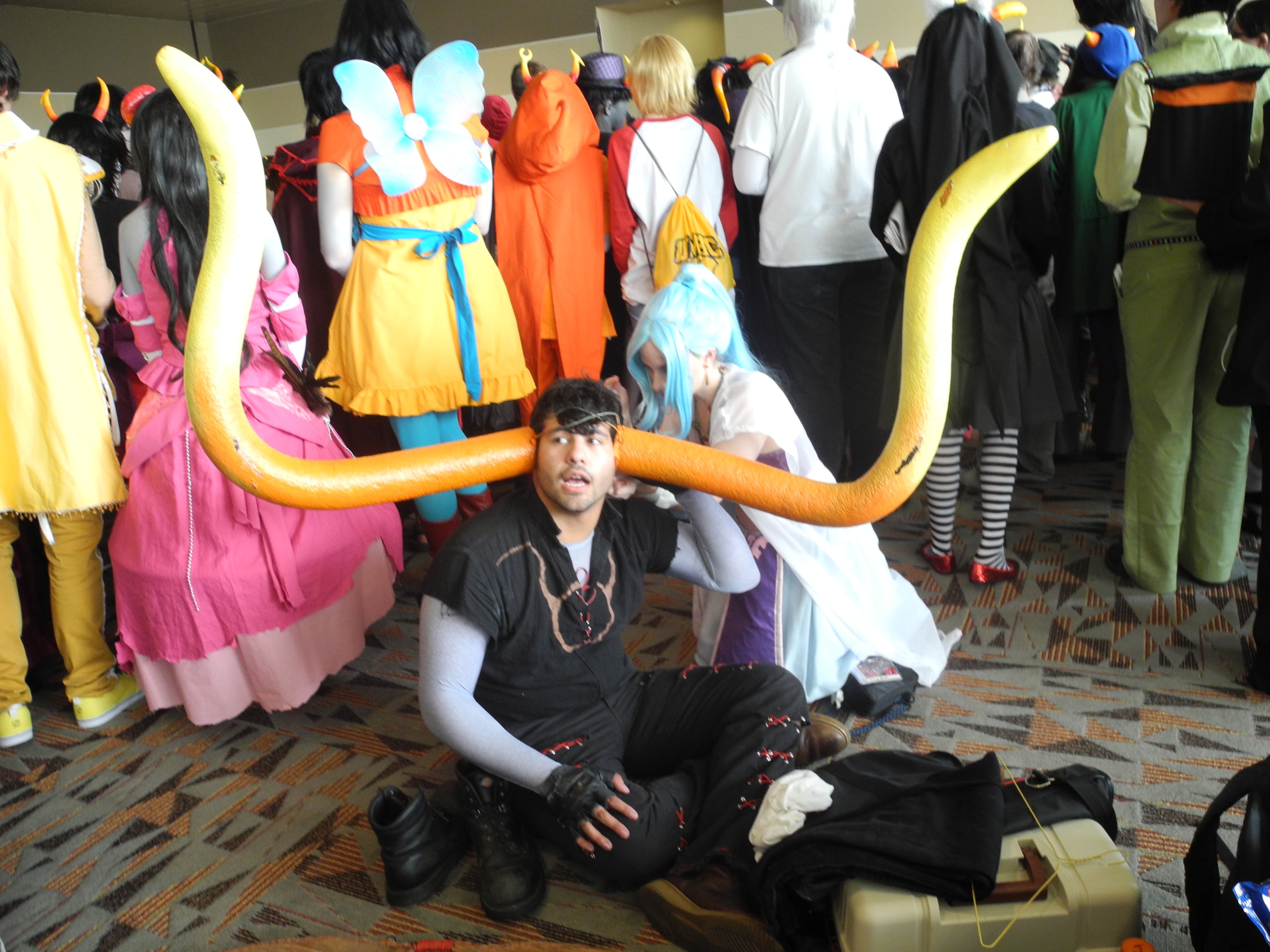 In Homestuck, the Trolls communicate with the comic’s teenage Earthling protagonists through a chat program in a video game called Sburb. Or at least that’s one way to describe Homestuck’s major plot.

“Homestuck is a webcomic about kids who have to play a game to save the world,” offers Julia Heslin, a 21-year-old business student from Long Island, N.Y.

Heslin is wearing a blond wig, with a small cupcake-shaped hat. She’s dressed as Trickster Jane, one of the many alternate personas of the four main characters of the comic’s second iteration. 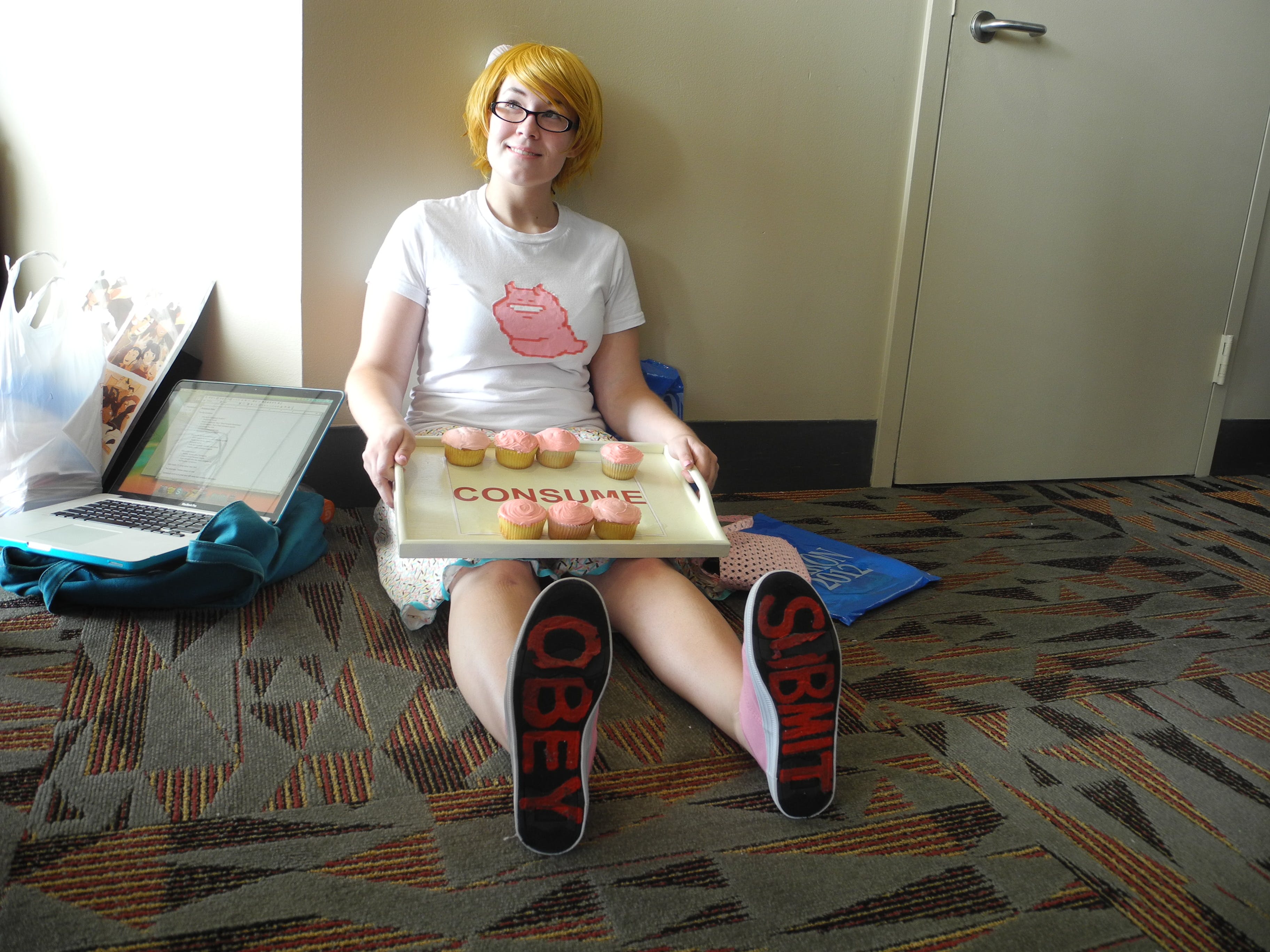 Her cosplay—the act of paying tribute to characters with elaborate costumes—is especially detailed. The symbol on her T-shirt and the “SUBMIT” and “OBEY” messages on the soles of her shoes clearly mean something to other fans, but not to me. Apparently, I’m in the minority.

“Most people seem to know what I’m talking about [when I talk about Homestuck],” she said, “but I’m surprised when I go to cons and people still ask, ‘What are you from?’”

Such a reaction is far more rare on Tumblr. While Homestucks have their own forum on the official site, more often than not fans delegate their discussions to Tumblr, a network that’s visual enough to act as a hub for fanart and text-based enough to host a mountain of fanfic. A quick browse through the “homestuck” tag on Tumblr reveals as much, and it updates by the minute.

Heslin is in contact with hundreds of other fans through her own Tumblr. The community’s insular nature has even prompted its own spinoff Tumblr, What the fuck is Homestuck?, which approaches the series from the perspective of a confused outsider.

“Homestuck is Tumblr heavy,” she said. “We have a vast Tumblr empire.”

Just how big is the Homestuck fan community? The main website reportedly gets 600,000 unique visitors a day. Eighteen-year-old Trent C. puts the number of fans in the millions.  With grey face paint and a bright blue hoodie, the art student is cosplaying Tavros, a teenage alien troll. 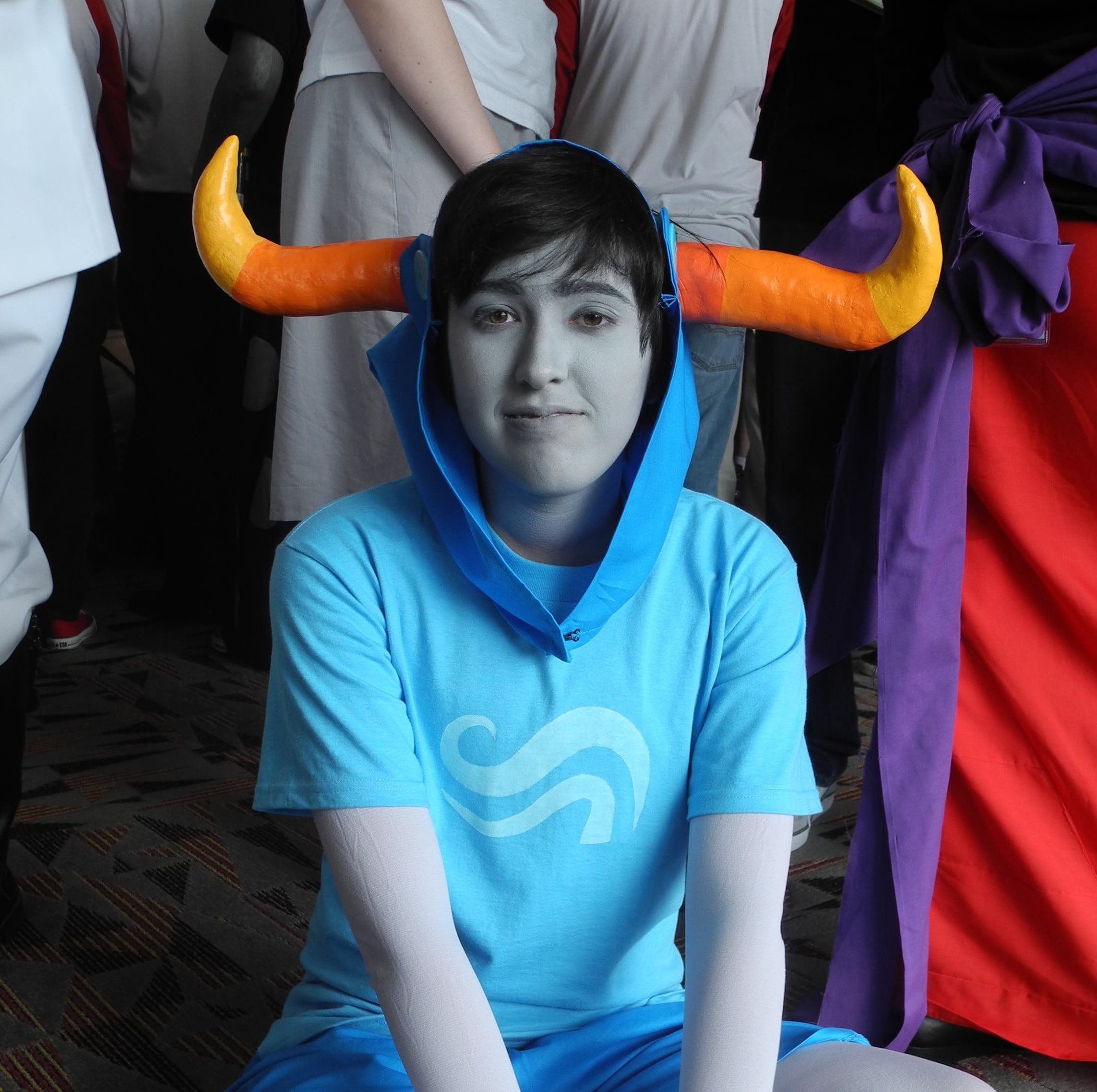 “On the night one of the big Flash animations came out, Andrew [Hussie] had to host it on a different website so it wouldn’t crash the MS Paint Adventures site,” he recalls. “It ended up crashing the other website. Then, he put it on Megaupload and it crashed that, too! In just one second, a million people arrived just to see the page.”

For Trent, Homestuck is the voice of his generation. He relates to the comic more than any other form of media he’s ever been exposed to.

In fact, Homestuck is literally the voice of Trent’s generation. Though the comic is written by Hussie, who is in his 30s, the comics’ first four acts were based heavily off of reader votes and requests. Plus, Hussie employs fan artists, animators, and composers to help him create the art, movies, and music for the comic.

One of those creators is Toby “Radiation” Fox, a member of Homestuck’s official Music Contribution Team. The 20-year-old composer and Northeastern University college student arranges electronic music for the comic.

“A few months after the comic started getting a following, people began making fan music and posting it on the forums,” Fox told the Daily Dot. “I was one of those people. I asked Andrew [Hussie], ‘Hey, do you mind if I contribute to the comic, would that be OK?’ and he said, ‘Yeah, sure, I was thinking of adding you anyway.’ There’s no rigorous screening. It’s like, ‘Hey if people want to do it let’s do it.’”

Homestuck is Fox’s favorite comic, but it’s still not something he recommends to friends.

“It takes a certain audience to really understand Homestuck and get into it,” he said. “If there is somebody I want to recommend it to, I tell them why I like it—hilarious dialogue, stuff I’m nostalgic for like video games, awesome music.

“It’s a new level of entertainment on the Internet, a combination of a bunch of different mediums we haven’t seen before.”

Surrounding Fox and me at Otakon, the future is already here, with a language and reference points utterly unique. This motley young crowd has made the new medium their own.

Now they just need help with their makeup.

Edit: An earlier version of this article said the first four acts of Homestuck were entirely reader driven. Additional information from Toby Fox has helped us to update the story.