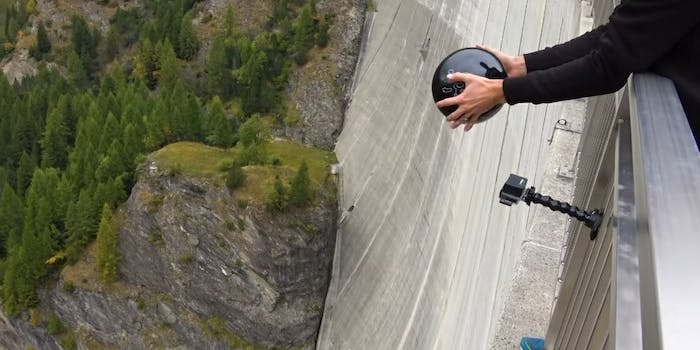 Many bowling balls were harmed in the making of this video.

Most of what the How Ridiculous YouTube channel has been producing lately involves dropping household items, bowling balls, giant darts, and a 60-pound ice block off the top of a 150-foot tower. All of that is fun and instructive, and it produces tens of millions of pageviews for the Australian YouTubers.

In the latest episode of How Ridiculous dropping things from absurdly high places, the crew visits a 540-foot (165-meter) dam in Switzerland. The YouTubers have brought along a bowling ball, baseball, GoPro, and, of course, a trampoline.

The first test of the bowling ball (so they could see where to place the trampoline) absolutely destroyed it when it smashed into the concrete structure of the dam. The second ball got decimated in the exact same way, and it sounded like a gunshot when it exploded.

So, How Ridiculous had to return to the dam on a different day to try again. Here’s what happened then.

Aside from the fun of seeing what kind of impact a 10-pound bowling ball can make upon an innocent trampoline, it’s also visually impressive to watch it fall so far so fast and (eventually) strike the intended target from such a great distance.

Plus, seeing a bowling ball get smashed to bits is exhilarating every time out.